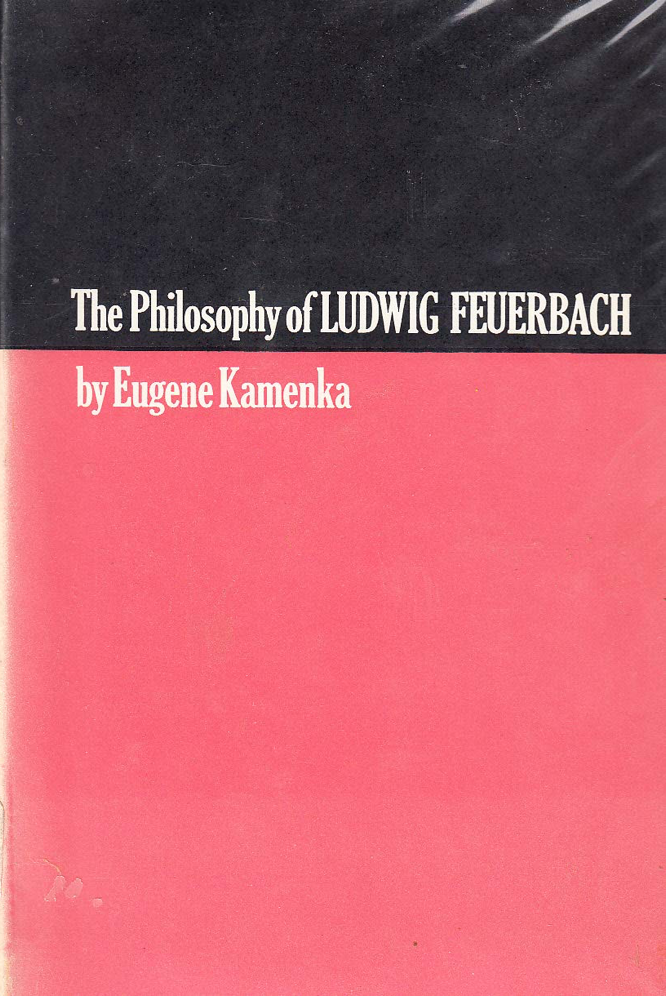 Kamenka’s book is a very clear and thorough overview of Feuerbach’s work. It presumes the unavailability of Feuerbach in English translation, so it provides many summaries and much in the way of direct quotation. Kamenka is highly sympathetic to Feuerbach, and (correctly, I think) considers him a crucial precedent to multiple trends in nineteenth- and twentieth-century philosophy, but Kamenka doesn’t overlook Feuerbach’s failings. In fact, an estimation of those failings is necessary in order to account for the rather thorough eclipse of Feuerbach as a figure of philosophical history.

The sequence of treatment is topical rather than chronological, and begins (after a digestible treatment of Feuerbach’s mise-en-scène and biography) with the critical or destructive elements of Feuerbach’s work, these being the most developed and consequential among his original readers. Kamenka puts the criticism of theological religion before criticism of speculative philosophy, reversing the sequence that prevailed in Feuerbach’s published works, because of the logical and genealogical priority of the attack on religion. Feuerbach had rejected the pursuit of theology before he gave over Hegelianism, and his indictments of the latter are rooted in his conflicts with the former.

At several points, Kamenka treats Feuerbach as a strong proponent, and perhaps even originator in one form, of the secularization hypothesis that anticipates the “withering away” of religion in the presence of modern technology and republican politics (e.g. 41, 68). I admit that I got something of a different impression from reading Lectures on the Essence of Religion, where Feuerbach certainly forecast and promoted the expiration of theology, but emphasized the continuing need for religion, however it might be transformed into a more honest relationship between humanity and human ideals. (Kamenka is certainly clear about Feuerbach’s distinction between theology and religion.)

The final part of the book treats Feuerbach’s positive contributions to philosophy. These chapters are shorter, and more focused on the difficulties involved in Feuerbach’s conceptions and presentations. As a largely aphoristic author in these respects, Feuerbach refused to offer materials that would lend themselves to systematization, and Kamenka at least gestures towards the real principles at stake in that refusal. But even so, Kamenka successfully identifies the value in many of Feuerbach’s ideas, that were later to see more extensive development in the works of Marx, Nietzsche, Freud, and the Existentialists.