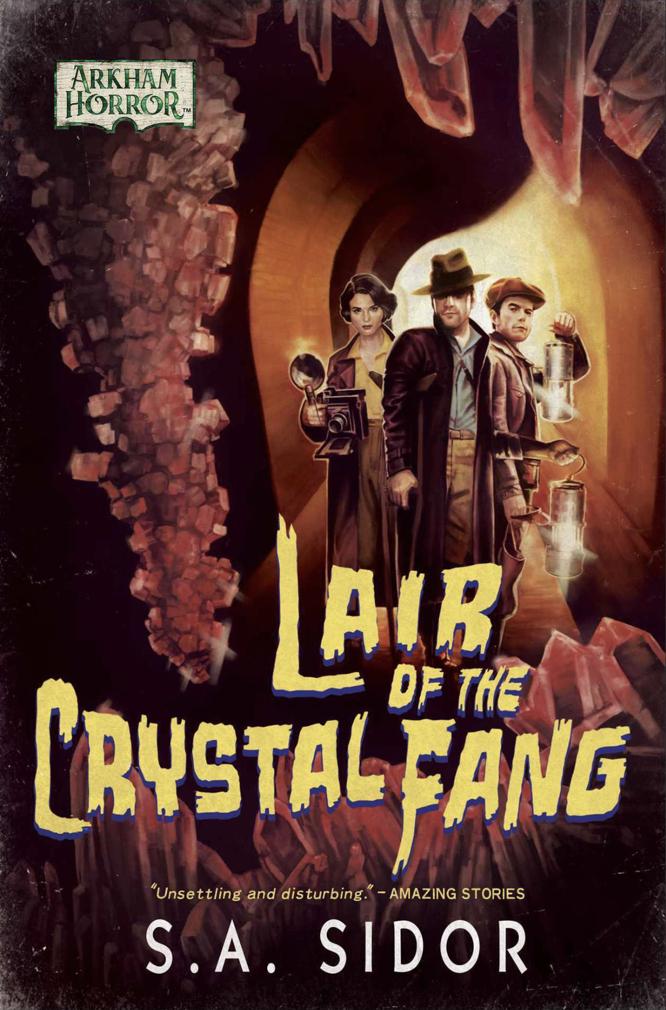 Within the larger franchise of Arkham Horror fiction, S. A. Sidor’s novels have established their own serial continuity, starting with The Last Ritual and developing in Cult of the Spider Queen. Daniel Strange’s cover art of this third installment Lair of the Crystal Fang shows three characters from the second book: Maude Brion, Jake Williams, and Andy Van Nortwick. These three are reunited in this tale, but they are not its only heroes. Returning the setting to Arkham allows Sidor to bring in a surfeit of other “investigators” from the Arkham Horror games. Urchin Wendy Adams, mayor Charlie Kane, and psychologist Carolyn Fern are also central to the story, and reporter Rex Murphy and researcher Mandy Thompson have important roles. Sidor seems to have realized that each such character appearing is a selling point in a piece of literature like this one.

A more general concept that this novel seems to have carried over from the Arkham Horror card game is the basic emphasis on trauma. Jake’s physical trauma from the South American adventure of the previous book includes what would be a Weakness card in the game: Leg Injury. Maude is definitely suffering from mental trauma.

Stylistically, this volume was a bit inferior to its predecessors. “Unpindownable” (50) would be all right in contemporary 21st-century humor, but it’s a clinker in pulp era horror. I was similarly put off by “torpefy” (131) and several other word choices and phrasings in the course of the book. As before, Sidor managed to strike a mid-point between weird horror and pulp action that is consistent with the mood of the games (as contrasted with Yog-Sothothery more generally).

The Lair of the Crystal Fang plot centers on the Arkham sewers, and it features a serial killer, witches, and gangsters. It moves along at a brisk pace with short chapters and frequent changes of focus. I wasn’t blown away by anything here, but it was an adequate addition to this now-sprawling set of game-based horror books.