Hoor hath a secret fourfold name: it is Do What Thou Wilt. 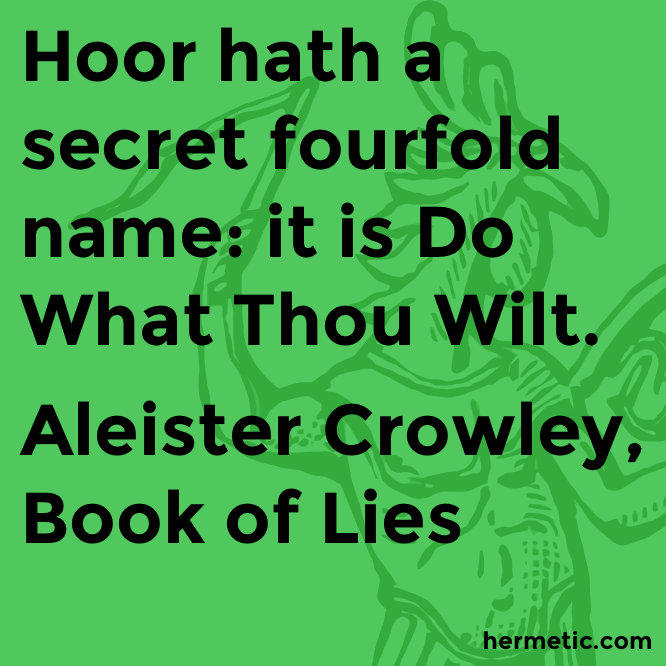 “Here is a brief extract that bears on their situation and gives a fourfold analysis. As in all things, St. Thomas is lucid and rigorous.

The order of the ‘Thrones’ excels the inferior orders as having an immediate knowledge of the types of the Divine works; whereas the ‘Cherubim’ have the excellence of ardor. And although these two excellent attributes include the third, yet the gift belonging to the ‘Thrones’ does not include the other two; and so the order of the ‘Thrones’ is distinguished from the orders of the ‘Cherubim’ and the ‘Seraphim.’ For it is a common rule in all things that the excellence of the inferior is contained in the superior, but not conversely. But Dionysus (Coel. Hier. vii) explains the name ‘Thrones’ by its relation to material seats, in which we may consider four things.

Commentary (ΚϜ) in Liber CCCXXXIII, The Book of Lies by Aleister Crowley.

“He is really the Fourth, being in Chesed, and of course his nature is fourfold. This Four is conceived of as the Dyad multiplied by the Dyad; falsehood confirming falsehood.” [via]

ΚΕΦΑΛΗ ΚϜ The Elephant and the Tortoise in Liber CCCXXXIII, The Book of Lies by Aleister Crowley.

“Fourfold is He, the Elephant upon whom the Universe is poised: but the carapace of the Tortoise supports and covers all.” [via]