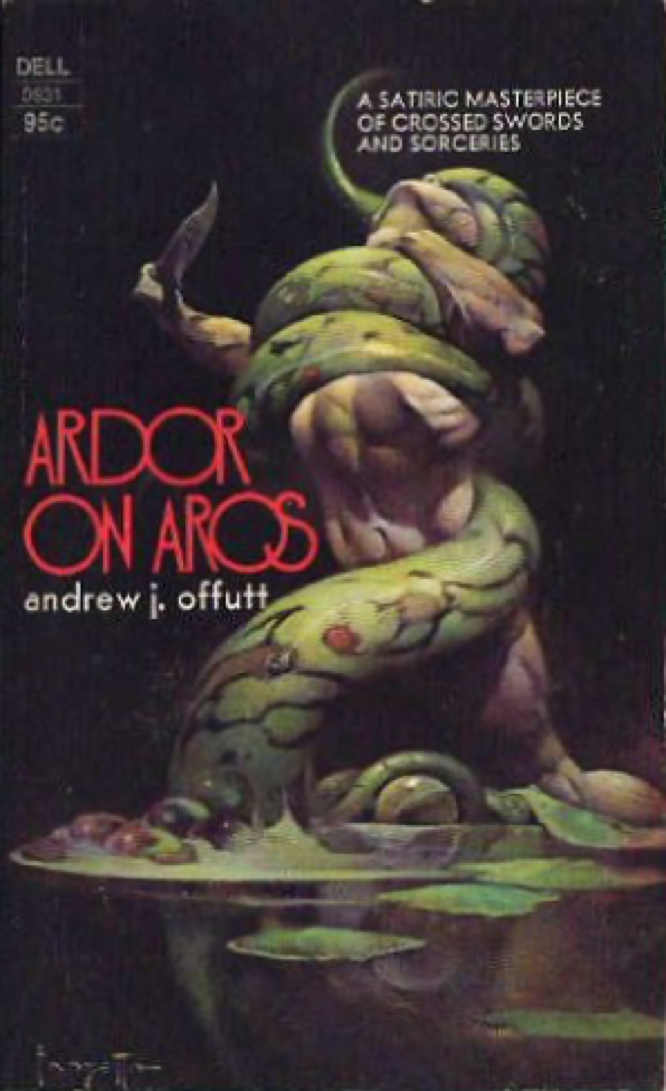 Andrew Offutt seems to think that Edgar Rice Burroughs was a prude. For myself, I’m pretty confident that ERB consciously devised the myriads of implied sexual scenarios in his John Carter and Tarzan stories alike. He’s the one who insisted that everyone on Mars be naked after all. In any case, come 1973, Offutt is ready to shuck the chivalric approach and let the barbarians barbarize.

Rather than simply telling his own more explicit riff on Barsoom and its savage excitements (as John Norman did in his Gor stories at roughly five times the total length of Burroughs’ original series) Offutt tells us about telling it, in the chattily sardonic voice of his grad student protagonist. Hank Ardor — oh, yes, the title is a pun — has read Burroughs and does not fail to compare and contrast his adventures with those of John Carter each step of the way. Readers well-versed in the planetary romance sub-genre will find plenty of amusing allusions throughout.

One of the too-clever-by-half touches Offutt adds is to subject his protagonist to situs inversus as a function of his transport to Aros: he is anatomically reversed, left-to-right. My recent reading in Bateson’s Mind and Nature highlights a problem with this detail, though: How would he know? As it happens, “left” and “right” are only definable relative to circumstance, and if his entire circumstance (including his physical body) has been changed, there would be no way of detecting the reversal. If he picked up a normal English book, it might seem printed backwards — but he has no such cues for his orientation.

The title of the final chapter is “The answer that was true — but STILL didn’t satisfy,” and while I’m not convinced of the “true” part (even within the hypothetical construct of the fiction), a little dissatisfaction seems to be a central theme of this book, which is a pretty quick piece of light entertainment, and one of the less profound items of metafiction you’re likely to encounter.

P.S. This book (the Dell paperback and I think only edition) has what must be the ugliest, most irrelevant cover ever painted by Frank Frazetta!