Kemet and the African Worldview: Research, Rescue and Restoration, edited by Maulana Karenga and Jacob H Cattuthers, from University of Sankore Press, selected papers of the proceedings of the first and second conferences of the Association for the Study of Classical African Civilizations 1984–1985, is part of the collection at the Reading Room. 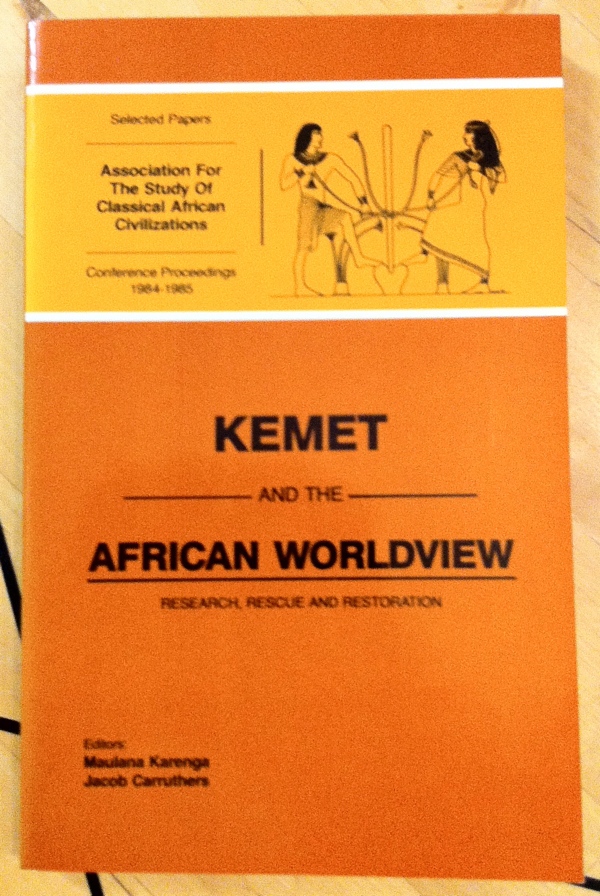 “Only the determined intellectual resistance waged by the 19th century Black Nationalists in the western hemisphere prevented the complete take over of the Nile Valley by the intellectual pirates who accompanied the Napoleonic invasion of Kemet (Egypt) in 1789. Those old African scrappers never left the high ground of the Nile Valley heritage and now their spirit like the Pharaoh Senwosret I of the 12th Dynasty (who lived about 4,000 years ago or 20th century B.C.E.) beckons us to come back to the Black land. This, is was in obedience to the summons of the most ancient and recent ancestors that Dr Maulana Karenga and I convened the First Annual Ancient Egyptian Studies Conference in February, 1984 at Los Angeles.

The Conference was designed to go beyond the establishment of an annual intellectual homecoming celebration and the founding of another Black professional scholarly association. What was and is not needed is the organization of African heritage and the restoration of African civilization. Such was the major objective of the Conference: the fruition of the dreams and visions of African people during the two thousand seasons of our distress.

In the struggle to liberate African people throughout the world, it is necessary that we advance the work and ideas of the brave Black people who have given their lives to keep this connection alive. What we are doing is not the result of a sudden flash of brilliance, but the culmination of the hard work of several generations of African Heroes and Heroines.” — from the Preface

“The historical project that Frantz Fanon posed of setting afoot a new man and woman has historically preoccupied Africans, in the diaspora and on the continent. Jacob Carruthers points out in his critical work, Essays in Ancient Egyptian Studies, that as early as the 19th century Black people in this country such as Hosea Easton, Henry Garnet and Martin Delaney had begun to ask themselves, ‘are we not different from the Europeans?’ and what do we have to offer that makes us able to pose a human paradigm, morally richer and more humanly expansive than what the European has to offer? As Fanon observed, ‘we need a model’, but ‘for many of us, the European mode is most inspiring’. However, he continues, ‘when I search for Man in the technique and style of Europe I see only the negation of Man.’ The need, then, he concludes is not to imitate Europe and its negations and become an obscene caricature of Europe but to join together in a new direction in a self-conscious attempt ‘to create a whole Man (and Woman) whom Europe has been incapable of bringing to triumphant birth.’

The logic of the process which begins with rejection of the deformed and deforming paradigm of Europe and leads to bringing into being a new human and humanity, inevitably raises the question of where to begin. Cheikh Anta Diop in his work, Civilization or Barbarism, argues cogently that the unavoidable starting point for Africans to rescue and reconstruct their history and humanity is in Kemet, i.e., ancient Egypt. ‘For us’, he states, ‘the return to Egypt in all fields is a necessary condition to reconcile African civilization with history, to be able to build a body of human sciences and to renew African culture.’ In fact, ‘far from being a diversion in the past, a look toward ancient Egypt is the best way of conceiving and building our culture future.’ It is, indeed, important for us to make a distinction between a diversion in the past and laying the basis for a new body of human sciences. Playing the same role as Greece and Rome in European culture, Diop contends, Kemet will offer fertile ground in the areas of philosophy, culture and science for a new African and a new paradigm for humanity which this implies.

The fundamental historical task becomes, then, one of rescuing and restoring the culture of Kemet and of exploring and expanding the human possibilities inherent in this process.” — from the Introduction