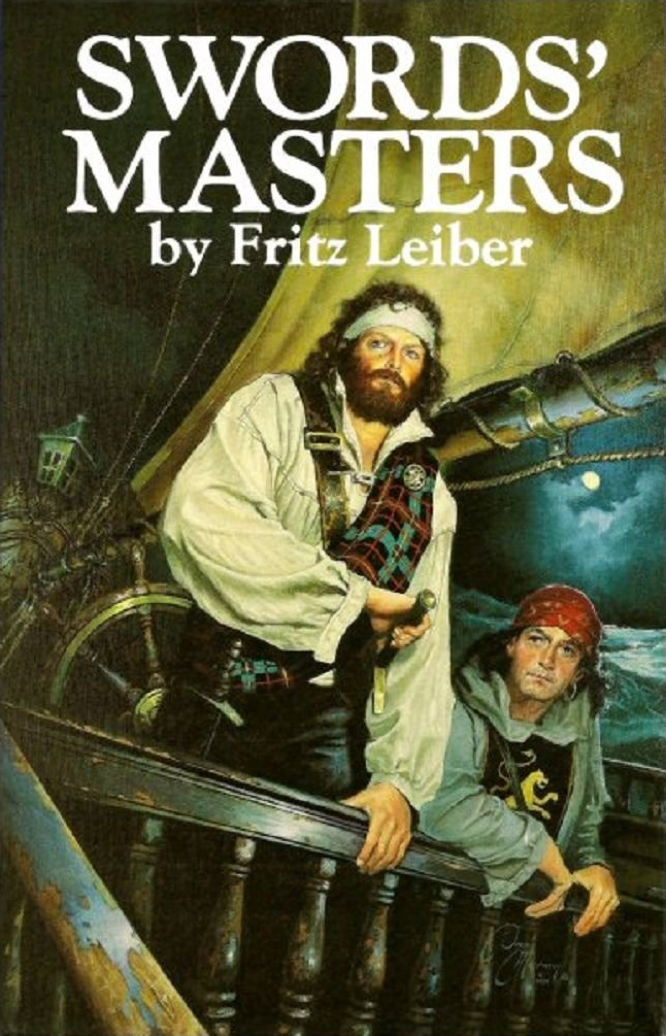 Swords’ Masters is the second book club omnibus of Leiber’s Fafhrd and Mouser stories, including the fourth through sixth volumes of their original book format.

The four stories of Swords against Wizardry alternate between substantial novellas written in the mid-1960s and short bridging pieces written later by Leiber to pull them together into a consolidated volume. The bridging stories, “In the Witch’s Tent” and “The Two Best Thieves in Lankhmar,” are both great fun, though. “Stardock” is a wonderful story of fantasy mountaineering, and it is complemented by “The Lords of Quarmall,” set in an underearth kingdom with its dynasty of sorcerers. This last story (the first of them to be written) was grown by Leiber from an unfinished manuscript by his friend Harry Fischer.

Swords of Lankhmar is the only full-fledged novel of Fafhrd and the Gray Mouser that I’ve read. At first, it seems like it might not even be such, because a preliminary nautical adventure seems to set it up to be episodic, but indeed, the whole thing is a single, complicated tale centering on an attempted conquest of Lankhmar undertaken by “Lankhmar Below,” i.e. the city of rats underneath Lankhmar. There are love interests for both heroes–likely the oddest such in all their adventures–assistance from their sorcerer-patrons, and more detail than previously available about the unimpressive upper reaches of Lankhmarian aristocracy. In this edition, Swords of Lankhmar is prefaced with a map of the world of Newhon–a welcome feature which is nevertheless awfully difficult to read, owing to varied calligraphy and an odd quasi-global projection.

The last book Swords and Ice Magic is full of retrospective glances at the earlier adventures of the two heroes, and is in many respects a sequel to “Stardock.” It starts with short stories, but these wax interdependent, so that by the time the reader reaches the long culminating novella “Rime Isle,” it feels as if they had merely been opening chapters of a novel. “Rime Isle” itself has more than a little taste of Neil Gaiman’s American Gods about it, concerning as it does fugitive gods trying to reestablish their bases of worship. It is strange that the conclusion of six volumes of Leiber’s stories leaves the heroes somewhere quite remote from the City of Lankhmar, i.e. the titular Rime Isle far out to the north in the Frozen Sea. Although I don’t know if it will assuage this particular discomfort, the fact inclines me to seek out and read the fugitive seventh book: The Knight and Knave of Swords. 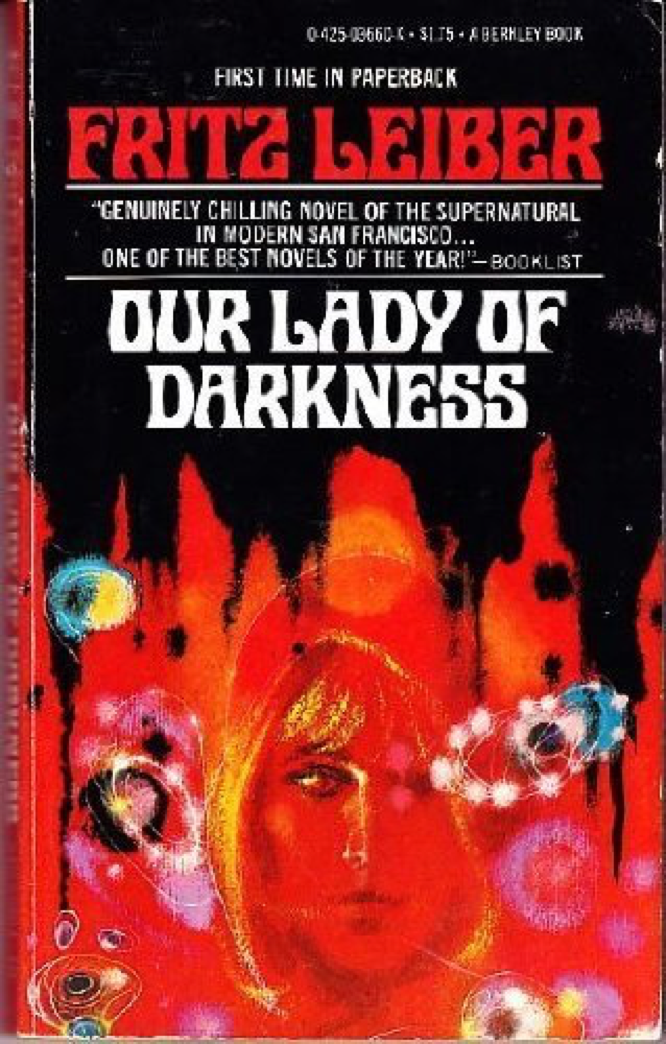 This book is one of those that I first read in adolescence and liked–but coming back to it decades later, I can only wonder at what I thought I understood about it. Our Lady of Darkness teems with explicit allusions to other fiction and to occult history that I could not have possibly appreciated on my initial read of it. The protagonist is fairly autobiographical (a horror writer named Franz) and the San Francisco setting is in every way integral to the plot.

As a horror novel, it’s middling, not especially scary. But the theories of modern occultism initiated by Leiber in this book are important and influential. His notions of megapolisomancy (i.e. thaumaturgical urban psychogeography) and paramentals have persisted beyond this book, and are in fact scarier with each passing decade. Possible effects of the 5G network presently being built out far exceed the direst anticipations of Leiber’s chiliastic sorcerer de Castries.

I re-read this book on my way to a conference in Barcelona at which one of the presenters was scheduled to speak on megapolisomancy. That whole conference seemed to be absorbed by the events of the book. At the end, I missed a flight connection, and I was re-routed through Oakland (the airport closest to downtown San Francisco and the landmarks given in the story). I joined up with a fellow passenger in London, where we were briefly stranded. He was a Mexican who works on construction in Chicago. His English was almost as bad as my Spanish, and we played chess in lieu of conversation. The synchronicity with events at the climax of the novel was a little disturbing.

Hermetic Library Fellow T Polyphilus reviews The Three of Swords: Swords and Deviltry, Swords Against Death, Swords in the Mist by Fritz Leiber. 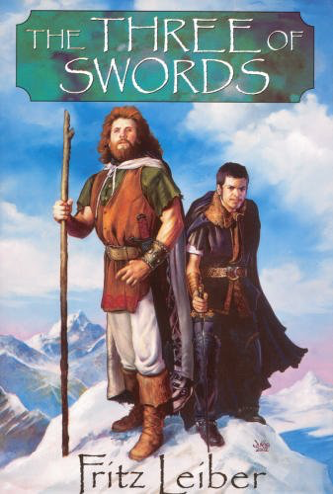 This omnibus volume contains the first three books of the series of Fritz Leiber’s Fafhrd and the Grey Mouser. The individual books are themselves collections, though, made up of individual stories not all written or first published in the sequence of internal chronology with which they are presented. Still, there are general plot advancements peculiar to each book. In Swords and Deviltry we are supplied with the youthful origins of the two separate heroes, their meeting, their orientation to the city of Lankhmar, and the loss of their first loves. Swords Against Death accounts for the period in which they acquire their sorcerous patrons, Sheelba of the Eyeless Face and Ningauble of the Seven Eyes. Swords in the Mist mainly supplies the novella “Adept’s Gambit” (1947), which puts Fafhrd and the Mouser in the classical Near East, adventuring out from Tyre in search of a sorcerer who has cursed them.

The earliest component stories in the whole omnibus are “The Bleak Shore” (1940) and “The Howling Tower” (1941), first published in Unknown Fantasy Fiction. These make Fahfrd and the Mouser less than a decade junior to Robert E. Howard’s Conan, and part of the original generation of sword and sorcery in American pulp adventure fiction. The flavor of these is quite distinct from that of the Conan stories, though. The Conan prose is generally high tempo narrative in a fairly transparent contemporary style, although framed by the imaginary ancient canon of the Nemedian Chronicles. (Moorcock’s Elric stories pick up this mode intact.) But Leiber presents us with a more orally-oriented storytelling, invoking rumor, riddle, and enigma. His heroes are accomplished rogues, not destined for high histories, despite their daring achievements.

Besides style, the main difference between a Conan story and a Fafhrd and the Mouser one is that Conan–companions, lovers, and lackeys notwithstanding–is a loner with a sovereign destiny. Whereas the Mouser and Fafhrd are an indissoluble duo, even when they are at odds with one another, and the fate of each is bound up with the other. Neither is dominant; each saves the other’s bacon with equal frequency as vice versa. Their ultimate bond to one another is really the fantasy cornerstone of their heroics.

The three component collections pull together the various stories according to internal narrative chronology, and insert brief bridging stories to solidify the continuity where needed. Thus, in 1968 Leiber started doing for his own pulp sword-and-sorcery heroes what Lin Carter and L. Sprague deCamp had begun doing to Howard’s Conan a year earlier. This effort, with its patent commercial motivation (and doubtless some genuine appetite to systematize and canonize the stories) is still uneven when done by the author, though better than the posthumous treatment the Conan stories received. The table of contents gives wonderful glosses on each of the stories, such as this:

“Once again blackness, spirit of night, with the Grey Mouser (one who strikes a balance between black and white) and russet-headed Fafhrd battling it. The well-known dangers of stealing the eye of an idol, whether the idol be doll-tiny or mountain-huge. Ice, snows, volcanoes, lava–and seven most deadly killers.” (ix)

My favorite stories in this volume were “Claws from the Night” (1951), “Bazaar of the Bizarre” (1963), and most especially “Lean Times in Lankhmar” (1959). All of these transpire in the city that forms the geographic focus of the series. Although a majority of the stories take place in distant countries and wildernesses, the best ones are set in “Lankhmar the Imperishable, City of the Black Toga,” where the two renowned swordsmen, whether they like it or not, are at home. [via]