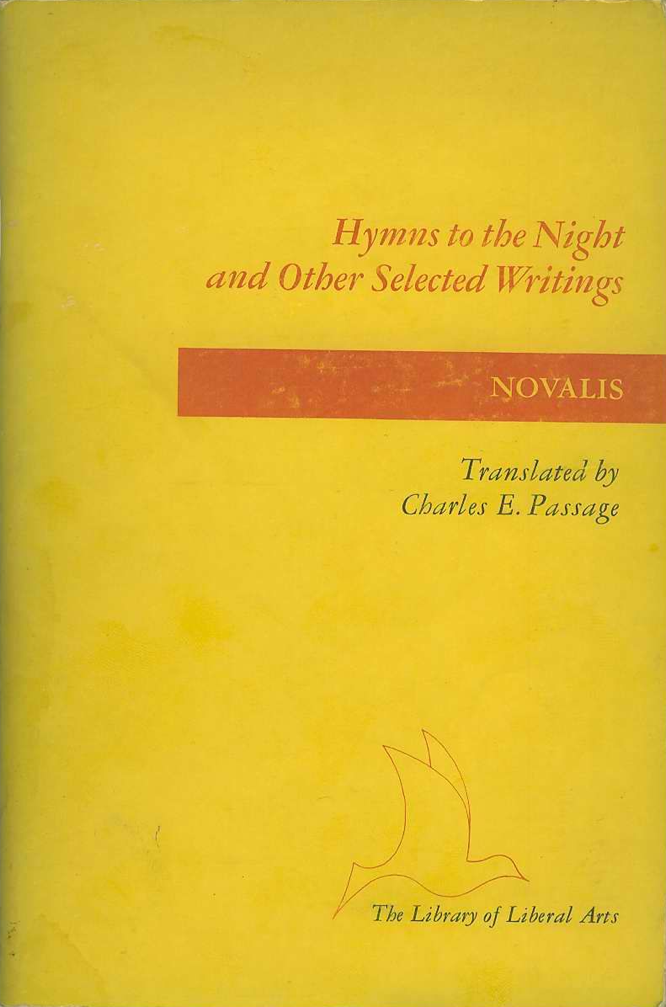 This brief collection from the works of arch-Romantic Philosoph F.P. von Hardenberg (“Novalis”) is more than worthy of attention. Charles Passage provides translations and an introduction for four distinct pieces.

“Hymns to the Night” itself is simply awesome. It consists of six introspective, elegiac and mystical “hymns.” Though they were all originally drafted as free verse, their first publication — reflected in this translation — had them as a mixture of prose and poetry, with the former increasingly giving place to the latter in the progress of the text, so that the sixth alone is entirely in verse. Besides its plain aesthetic value, this text should speak quite strongly to those who have been initiated to the Life Within. Curiously, Passage’s translations of the verse are stronger and more lucid than his work with the prose, where the English vocabulary is sometimes a bit off: e.g. “skyey” (9).

The second piece, here entitled “Klingsohr’s Fairy Tale,” is excerpted from a novel in which Novalis had embedded it, although it was probably first written independently. Passage in his introduction offers a long and rather detailed synopsis of the plot of the fairy tale, which notes I skimmed past at first, thinking that I would rather approach the story without extra editorial baggage. As it turned out, I ended up returning to the summary as a help while reading: the glut of fantastic imagery in the tale is so overwhelming that it is hard to keep track of the course of events. Also, Passage’s allegorical reading is not at all tendentious. The story itself is wonderful, telling of a series of adventures leading to the reunion of the heavenly court of Arcturus with the terrestrial household of humanity, and the triumph of Eternity over Time. While it is reminiscent of the Hypnerotomachia and Bruno’s Expulsion of the Triumphant Beast, I can easily imagine it as a Hayao Miyazaki movie.

“Christendom or Europe” is an essay attempting dialectical history, with a chiliast resolution. Passage notes how it anticipates Hegel, but it also recalls Joachim of Fiore. Novalis mourns decrepit and dead Catholicism, and he execrates divisive and degrading Protestantism. He looks forward to a “new, enduring Church” with a vision that I found alternately cheering and chilling, but in historical retrospect unfilfilled.

This volume concludes with a “purely random selection” (65) of fifty aphorisms by Novalis. They are indeed a mixed bag, but when he “hits,” he does so solidly. “Man is a sun and his senses are his planets” (72).