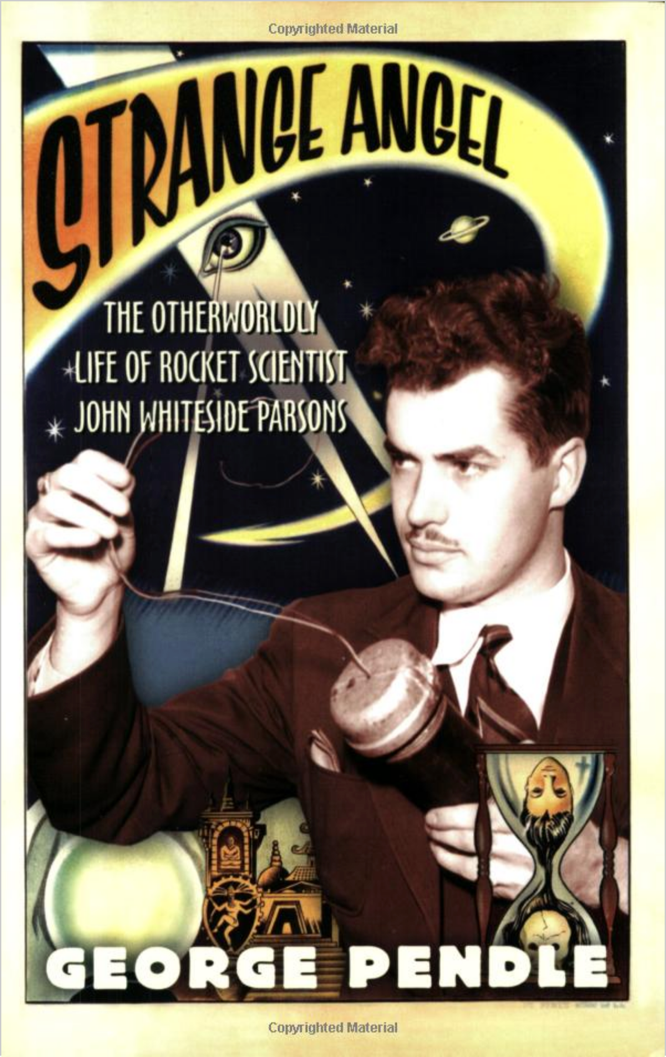 Strange Angel is the second full-length biography of Jack Parsons I have read. The first, Sex and Rockets, was a book about an occultist who happened to be a rocket scientist. George Pendle’s “angel” is instead a rocket scientist who happens to be an occultist. To be fair, both accounts discuss the congruence of Parsons’s various passions, rooted in a lust for exploration and experiment. But Sex and Rockets is looking to be shelved with occultism, and Strange Angel with history of science.

Author Pendle is clearly no occultist himself, and he occasionally errs in attributing idiosyncrasy to Parsons in his embrace of received Thelemic doctrines, which is not to say that Parsons wasn’t idiosyncratic. But Pendle’s treatment of religious organizing by the followers of Aleister Crowley is on the whole fair and accurate, and benefits from consulting key repositories of primary sources, including O.T.O. (i.e. the Crowley estate, a continuing religious body). In no way does he marginalize Parsons’s occult activities within the general scope of the biography. Perhaps the most vivid anecdote of the whole book is Parsons declaiming Crowley’s “Hymn to Pan” at Aerojet social functions, urged on by his boss Andrew Haley.

But, as I observed at the outset, Strange Angel is really about the science, chiefly the inception of practical rocket science in the US during the 1930s and 40s. Pendle gives an exciting and detailed narrative of the Pasadena rocketry crew (the “Suicide Squad”) , the GALCIT rocketry project at Caltech, the founding of Jet Propulsion Laboratories and Aerojet Corporation, and the effects of war and commerce on the progress of rocketry from science-fiction pipe dream to common technology. I had never really paused to consider it before, but it turns out that the word “jet” is nothing more than a euphemism for the word “rocket.” Scientific consensus was hardened against the idea of using rockets in transport, and Frank Malina and Theodore von Kármán hit on the idea of coining a new word to smuggle the technology into practicable research (157).

Another valuable feature of the book, and one which attracted me to it, is the responsible way that it details the intersection of technological experiment and science fiction, within the frontier field of rocketry. Pendle describes a variety of fascinating milieus and their development: the scientific scenes mentioned above, the Los Angeles Science Fiction Society and early SF fandom, Agape Lodge O.T.O., and the “Parsonage” at 1003 Orange Grove that Parsons established to be an O.T.O. Profess House, but which evolved on its own bohemian trajectory.

The first chapter of the book details Parsons’s untimely death in the explosion of his home laboratory in Pasadena, starting with the phenomenon of the explosion itself as it would have been perceived in the moment by locals. After returning Parsons to childhood and working through a full biography, Pendle seems to strongly support the most pedestrian explanation of the tragedy: it was an accident due to haste and awkward circumstance.

Parsons was a notable figure who has been unduly neglected, as Pendle observes. So there’s no reason to consider this biography the final word on this fascinating man, but it is a significant contribution and a pleasure to read. [via]