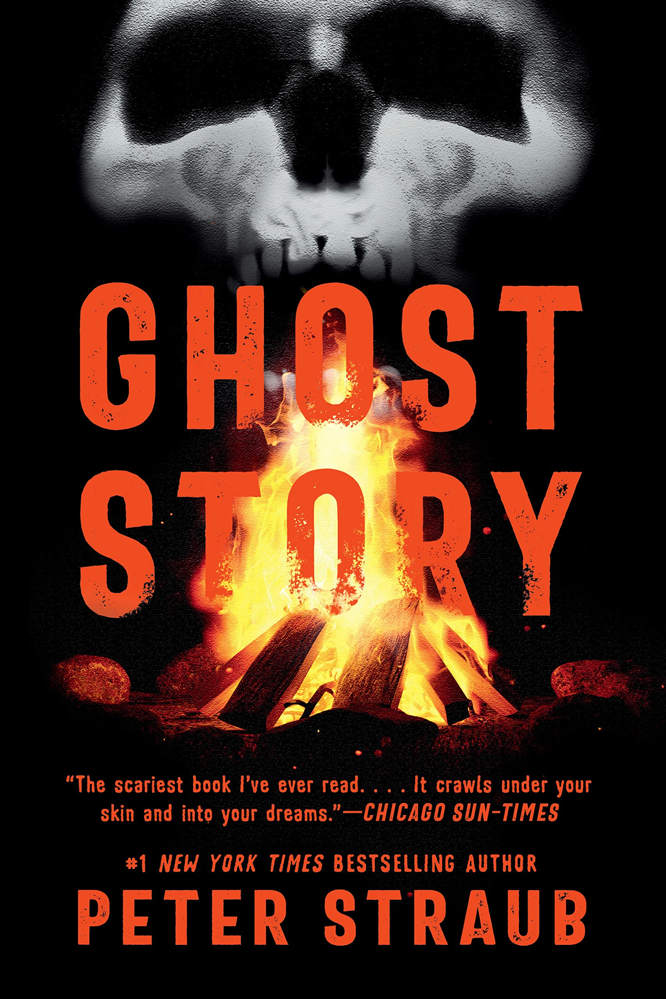 Ghost Story was Peter Straub’s breakout novel in 1979, and I remember seeing it in the “new” section of my local public library at the time. The publisher flogged it as a supernatural horror book with literary merit, and it was a fair boast. Straub was an admirable prose stylist, and his monsters have come a long way from their folklore and pulp origins. I found precursor comparanda in some of Seabury Quinn’s semi-traditional creatures and most especially Jack Williamson’s Darker Than You Think. Straub, who would eventually edit the two-volume American Fantastic Tales: Terror and the Uncanny for Library of America, consciously adverts to his more literary antecedents Nathaniel Hawthorne and Henry James, even going so far as to name two central characters Ricky Hawthorne and Sears James.

It’s a big book, with the storytelling heft of, say, a full season of the Stranger Things television horror drama. Like that show, it is multigenerational in scope, although Straub’s key ensemble is geriatric rather than adolescent. And Straub’s imagined town of Milburn, New York provides the Hawthorne-to-HPL New England sense of a lost frontier buried deep in the unconscious, rather than the vulnerable bucolic Midwestern sensibility of Hawkins, Indiana. All sorts of characters are powerfully drawn, with relationship tensions extending in every direction.

The body of the book provides several layers of background for the frame story focused on the horror novelist Don Wanderly. There is naturally some metafictional positioning that results, both from Wanderly’s metier and from the ghost-storytelling preoccupation of the Chowder Society, the clique of old friends around whom most of the novel is constructed. The climax takes place in late December, thus attaching the book to the English tradition of the Christmas ghost story, for which those of M.R. James are paragons. While there was less metafictional meat here than in Straub’s later book The Hellfire Club (i.e. Wanderly’s The Nightwatcher is neither so well-developed nor so pivotal to the story as Hugo Driver’s Night Journey), it still put a shine on the writing.

I have not yet seen the 1981 movie which was “loosely based” on the novel, but the book itself gives more than a little attention to cinema. Attorney Ricky Hawthorne is a movie aficionado given to describing people in terms of old screen icons, and he is friends with the proprietor of the local picture show. A key background character Eva Galli was a film actress, having appeared in a single silent film China Pearl (1925), and there is also important business involving a more recent actress Ann-Veronica Moore. The film of Ghost Story turned out to be the final screen appearance of Fred Astaire (in the role of Ricky Hawthorne), and Astaire is actually name-checked in the novel: “… Clark Gable in a bush jacket turning into Dan Duryea in a gangster’s nipped-in-suit turning into graceful, winning Fred Astaire in a Chowder Society tuxedo” (465).

My copy of this book is the first edition, which has a feature of interest extirpated from later re-issues. The chapter “Alma” (181-221) details Wanderly’s previous marital engagement during a brief university gig in Berkeley, California. By way of making the Alma character mysterious and creepy, Straub associated her with something presented as more dreadful than “California lunacy at its worst,” to wit: “O.T.O. … Ordo Templi Orientis … raw material for nightmares” (194-5). Some incidental details demonstrate that Straub’s awareness of O.T.O. was almost certainly based on press coverage of the Solar Lodge pretender organization. In any case, he never presents any specific characters or activities as being part of O.T.O., he just uses the allusion for nebulous menace. Since the actual O.T.O. was operating in Berkeley in 1979, they felt a bit slandered and reached out to Straub, who graciously apologized and made an edit for later printings to change the name to an occult order of his own invention: Xala Xalior Xiati.

The rich character development in this book is the feature that makes it most effective as supernatural horror, in my opinion. You can’t be very afraid for people you don’t care about. On the other hand, there are doubtless adrenaline junkies for whom the pace of this novel with its nested retrospection is just too slow to keep them engaged. (I’ve certainly read complaints to that effect online.) It continues to find a place in “best of” horror indices, and it deserves one.