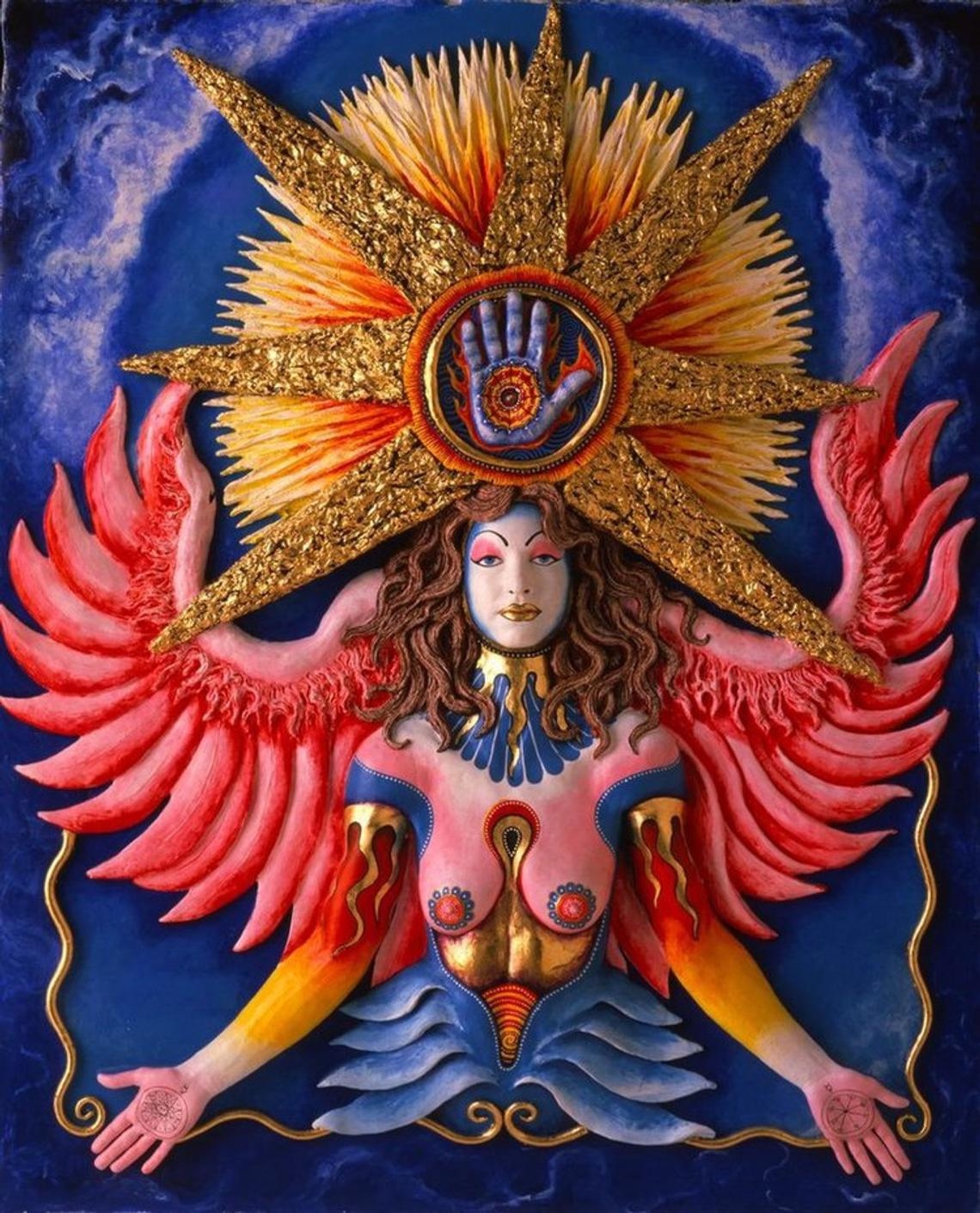 Mercury by Skee Goedhart is a colorful, dimensional fiberglass art piece with esoteric symbolism from The Key of Solomon.

This amazing, one of a kind art work is a dimensional painting. It hangs on the wall but rises out more than 8 inches from it in certain places. Then entire image was created out of a single piece of fiberglass. It weighs over 65 pounds.

THE MARKINGS OF ‘MERCURY’:

On The Left Hand: The Third Pentacle of Mercury.
This and the following serve to invoke the Spirits subject unto Mercury; and especially those who are written in this Pentacle; Kokaviel, Ghedoriah, Savaniah and Chokmahiel.

On The Right Hand: The Fourth Pentacle of Mercury.
This is further proper to acquire the understanding and Knowledge of all things created and seek out and penetrate into hidden things; and to command those Spirits which are called Allatori to perform embassies. They obey very readily.

This series of work was produced in the late 90’s, early 2000. The creation of these pieces was extremely complex. Semi-full body castings were taken of live models using dental alginate. Liquid plasticine was poured into the negative alginate molds. When hardened these plasticine parts were assembled upon a large sheet of Mylar and additional elements were added (i.e. wings and headpieces). A 5 inch thick layer of silicone was then poured over the entire image, creating a final, negative mold. Liquid and gauze fiberglass was then placed into the silicone mold giving me the final product. From each silicone ‘mother mold’ I was usually able to create 3 – 4 pieces before the mold fell apart. The final, fiberglass casting was then painted (acrylic, oil, enamel and gold leaf).

For additional interesting information about this art, including about the model and additional images, go to the page about this piece. For more by this artist, head over to Skee Goedhart Fine Art.

A package of goods from supporter Robert Mitchell, Jr’s PTDICE shop has arrived at the Reading Room, including an older version of the Cabal Fang book, various zines, patches, and a set of PTDICE for rolling workout routines. 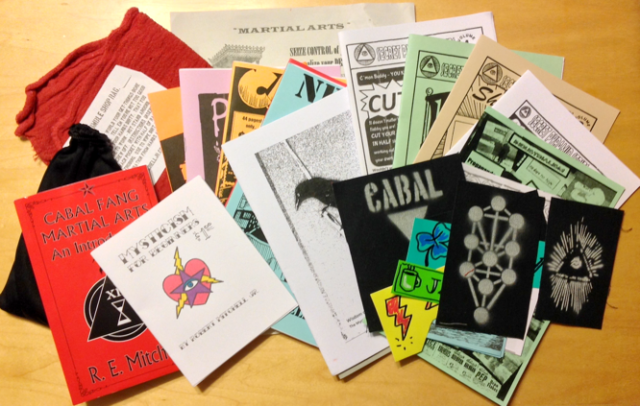 Appalachia – no. 201 by Hermetic Library anthology artist David B Metcalfe‘s The Message may be of interest.

“An abrasive series of explorations in the contemporary aetheral ambience surrounding the Appalachian landscape – the hidden effect of electric wires and industrial waste as it rips raw holes in the subtle body of one of the world’s oldest mountain chains.

1485 (nRadio Variations) by Hermetic Library anthology artist David B Metcalfe‘s The Message may be of interest.

“‘In the 1950s, Friedrich Jürgensen, a painter, archaeologist, and former opera singer living in Sweden, found traces of extra voices on tapes with which he was trying to record birdsongs. Over the years, Jürgensen made thousands of recordings of the voices of the dead…’*

These voices often came through to him via a radio tuned to 1485 Khz.

Sounds assembled on chilly drives through north Georgia with the radio tuned to 1485 khz in January 2014, Processed & Fixed in the heart of the woods during the heat of warm summer nights in July, 2014.

File 72314 (Variations) by Hermetic Library anthology artist David B Metcalfe‘s The Message may be of interest.

“Variations on a theme, open landscapes of sound evoking the wandering spirits of the Cold War. A dossier of desolate dreams returning home and the subtle weight of unfinished assignments. Pathways for uneasy spirits to find peace.

Themes on the American Spiritual Landscape (Vol. 3) by Hermetic Library anthology artist David B Metcalfe‘s The Message may be of interest.

“A series of landscapes in sound to aid in exploring the diverse and winding paths of contemporary American spirituality.

Black Meditations by Telecult Powers is a recent release that may be of interest, and is available as a combo of vinyl and download.

“Telecult Powers, the candle burning duo of Witchbeam & Mr. Matthews, known for their ritualistic live shows and previous releases on Baked Tapes, Draft, Pizza Night and more, bestow upon us their new album “Black Meditations”, a six part sonic meditation on the connections between man, myth & magic. “Black Meditations” taps into the world of folk magic, reaching out to the spirit world through sonic practice, with the duo praying at an altar of bizarre electronic instruments handcrafted by Mr. Matthews. Through this “Hoodootronix” music Telecult Powers taps into the current in which the spirits of Atlantis, Rexino Mondo, In Search Of…, Dionysus cults, old witchy Hollywood, Mort Garson, Louise Huebner, Nik Raicevic, Bruce Haack, Bebe and Louis Barron, and Discordians draw from. Featuring guest appearances by Lala Ryan from Excepter, Rachel & Grant Evans, Kate McGuire, The Road Chief and liner notes by Carl Abrahamsson”

All hardware used by the band handcrafted by Mr. Matthews. 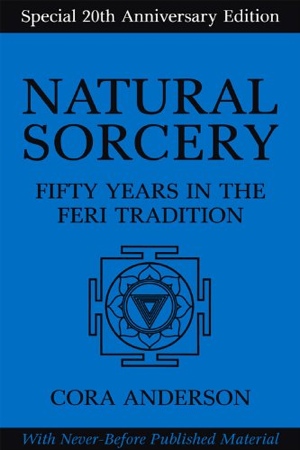 Profound and insightful, this revised and expanded 20th-anniversary edition of Fifty Years in the Feri Tradition is filled with information not available anywhere else and is the definitive text on the Anderson Craft. Written as a gift to her husband, the blind poet and shaman Victor Anderson, on the occasion of their 50th wedding anniversary, this guide from Cora Anderson distills their work and teachings in the fairy faith of the Old Religion, explaining the thealogy, physics, and social structure of the Anderson Craft. Natural Sorcery is a practical, working grimoire that discusses the guardians, symbols, and ethics of the still-living oral Feri Tradition in a highly personal, conversational style. This special, limited edition also features annotations by members of the Andersons’ final coven. Anyone interested in this deep and secretive tradition need look no further than this book by one of its most influential teachers.

Do What Thou Wilt shirt

This Do What Thou Wilt shirt from 6DollarShirts may be of interest. 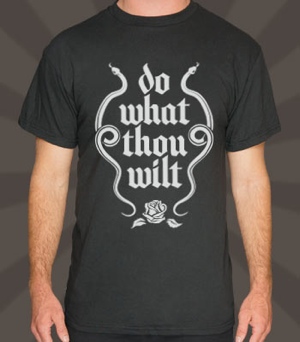 The Isis Oracle: Divination Plate and Speaking Stones by Surcadiana may be of interest. 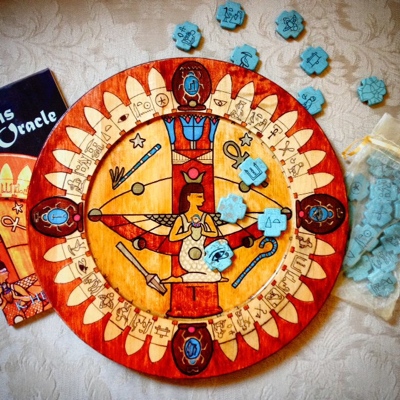 “Hand painted and stained 11.5″ wooden divination plate used to read the casting the 28 howlite dyed turquoise stones. Howlite can prepare the user to receive wisdom from the divine. It is a stone used to calm energies prior to meditation or readings. It can be used to access past lives and to aid in journeying. Each stone is hand painted with a different hieroglyph plus one blank. The board is used to divine answers to questions through spreads, the casting of the stones and as a spirit board using the blank as a planchette. The plate can also be used for offerings or charging talismans, jewelry, spell work, etc. Several mystery schools are represented and many divination techniques are possible with this system. Instruction book included teaches how to cast the stones and read their energies. Techniques for several spreads are also included.”