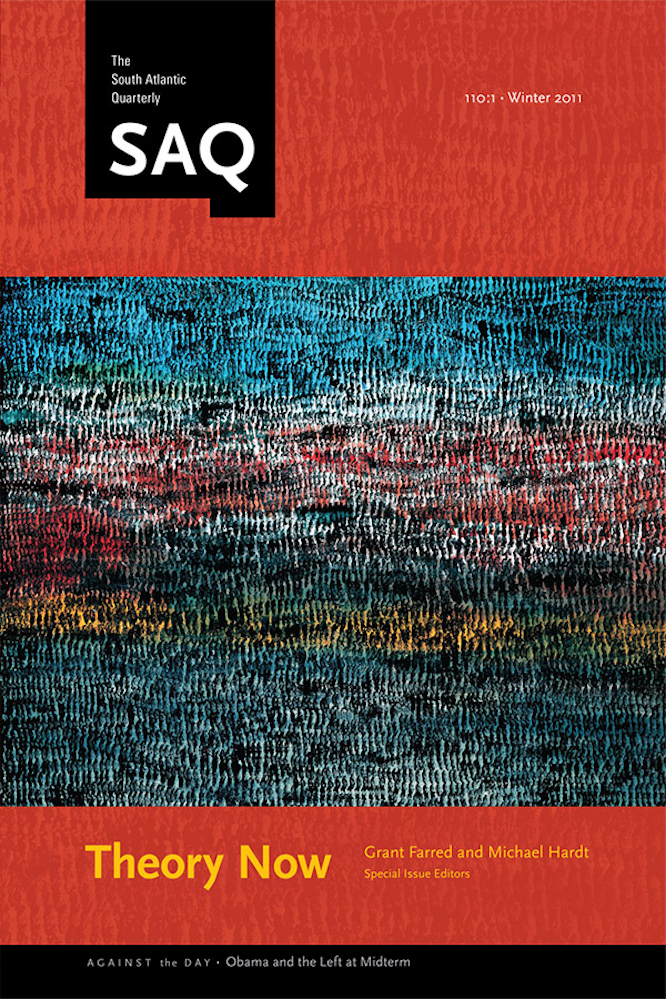 This number of South Atlantic Quarterly debuts its division into a main body of articles plus a smaller section of less research-driven and more topical essays, and it seems to work well enough here. I read the latter portion first, mindful of its timeliness. Titled in this case “Against the Day,” the title couldn’t help but remind me of the Thomas Pynchon novel of the same name (which I have two-thirds read), about a different “day.” (There is a surfeit of polysemy in Pynchon’s title on its own ground, but I’ll leave that for its own review.) These essays on “Obama and the Left at Midterm” are really about “The Left at Obama’s Midterm.” The articles are all very short, often insightful, and actually less dispiriting than I had anticipated.

The larger portion of the book is a special issue called “Theory Now” edited by Grant Farred and Michael Hardt, each of whom also contributed articles to it. In addition, the collection is introduced by Kenneth Surin, and afforded an afterword by Jonathan Culler. Of the two, I thought Culler did the better job of summarizing the contents and identifying lines of connection among them: a tall order, since the contributors had been asked not to write about “theory now,” but simply to write theory in the way that they do now.

Culler notes the theoretical approach to “spectrality” as a recurrent feature, and I most enjoyed the articles exhibiting it: Hanson on reparative reading, Gordon replying to the film The Halfmoon Files, and Naas digesting Derrida on photography. Theory regarding race and gender was, if not ubiquitous, common to many of the better articles in the volume. I was pleasantly surprised by Rei Terada’s “Frailty of the Ontic,” which demonstrated an approach to psychoanalysis as a form of philosophy, whereas I am used to considering it a mutation of religion–and have no patience with its self-presentation as a form of therapy. I was disappointed by Ellison’s “The Spoiler’s Art,” which discussed architectural matters with the stakes of “embarrassment” (so I suppose that my lack of enthusiasm was somehow in harmony with the content).

Of the two articles written by the principal editors, I was less excited by Farred’s reflections on interdisciplinarity, which I found to be a rather unuseful exercise in ivory-tower navel-gazing, somewhat heavy with cant, and notably dependent on a canonical reverence for Heidegger. By contrast, Hardt’s “Militancy of Theory” reviewed an important trajectory in the critical tradition which now has me reflecting on what I may someday write about as the final paradox of philosophy.

I am a sometime buyer of SAQ, grabbing issues off of the newsstand as they catch my interest. I always find some of the contents challenging and worthwhile, and this number was no exception.