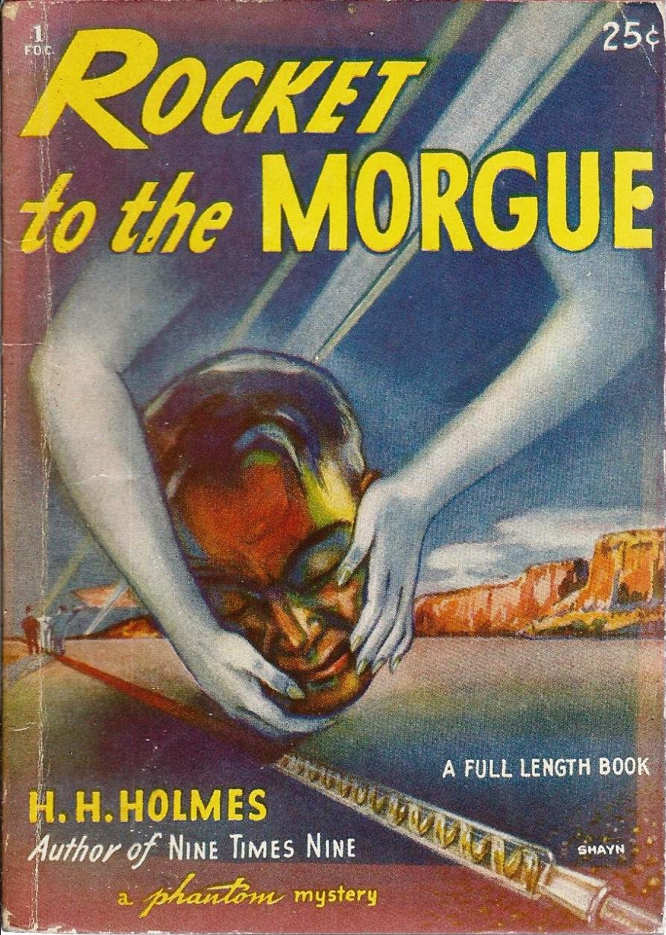 Anthony Boucher used the pen name H. H. Holmes in writing the novel Rocket to the Morgue, but he includes a character named “Anthony Boucher”! “Boucher” is not all a central figure in this murder mystery, which postpones the accomplishment of the crime until the later chapters. But he is included as an element in a milieu that the author drew from his own experience: the Los Angeles “scientifiction” scene of the early 1940s. The roman à clef elements of the novel supply various characters transposed from members of the actual Manaña Literary Society, to whom the book is also dedicated. These include Robert A. Heinlein (“Austin Carter”), L. Ron Hubbard (“D. Vance Wimpole”), Cleve Cartmill (“Matt Duncan”), Jack Parsons (“Hugo Chantrelle”), and Jack Williamson (“Joe Henderson”). The portrayals are loose, but recognizable. Rocket scientist Chantrelle, for example, is abstemious with respect to drink and sex, which is hardly faithful to the actual Parsons. The Hubbard-based character Wimpole is the one who is likely to inspire the most suspicion as a possible culprit.

The book is also the second written by “Holmes” to feature the nun Sister Mary Ursula as a principal sleuth, although the police lieutenant Terry Marshall — also a continuing character — is the main protagonist with whom readers are invited to identify. The mystery genre aspects are all self-reflectively stock elements, with much made of the “locked room” scenario. (Marshall’s wife is an avid mystery reader.) These are then counterpoised to the novelty and marginality of the experimental “magazine-based” science fiction genre. I’m no wide reader of mystery fiction, but this one seems to derive its enduring interest for readers primarily from its social setting and metatextual features. [via]