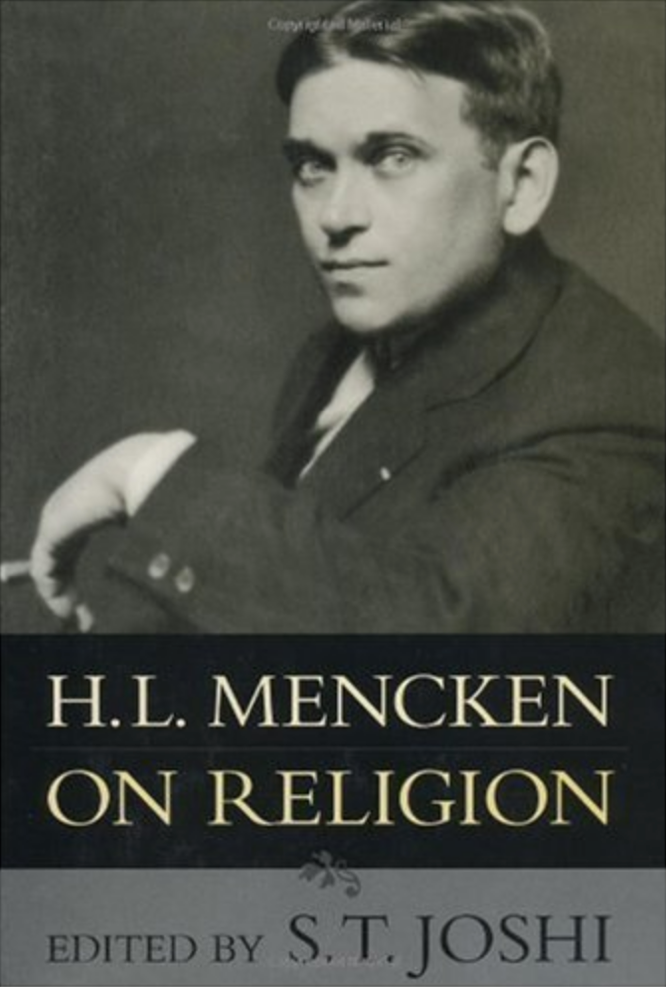 S.T. Joshi’s anthology of Mencken’s work on religion is a terrifically entertaining read. Mencken was an equal-opportunity infidel, skewering Evangelicals, “mainstream” Protestants, Catholics, Theosophists, and Christian Scientists entirely without theological favoritism. He did have a special animus toward Methodists, for having been the greatest motive force behind the enactment of Prohibition, which was in effect during nearly all of these writings. He applauds religious diversity and argues for freedom and privacy: “Man will never be wholly civilized until he ceases to intrude his snout into the shy mysterious, highly private recesses of his brother’s soul” (135). He argues (with tongue deeply in cheek) in favor of the Spiritualist hypothesis of survival, on the grounds that if he himself were to return from beyond the veil, he would be as mischievous, dishonest, and irresponsible as most seance apparitions seem to be (141).

While unpersuaded regarding metaphysical verities, Mencken in these writings never argues for atheism outright. In fact, he pleads for “religious” functions stripped of theological baggage in his fine essay on “Services for the Damned” (78 ff.). He is also willing to credit the great poetic power found in such places as the King James Bible and the Book of Common Prayer, as descended from the poetry of the ancient Hebrew texts (64). He further opines that the poetic force in scripture and liturgy had allowed religion to survive its own intellectual bankruptcy and would continue to do so.

The largest section of the book is dedicated to Mencken’s first-hand reportage on the Scopes Monkey Trial in Dayton, Tennessee. In his first writing on the topic, Mencken held out for the regulatory authority of the state over rogue pedagogues, no matter how benighted that state’s decision might be. Quickly, however, he developed a clear revulsion for William Jennings Bryan and the Fundamentalist cheerleaders for the prosecution. With the event of Bryan’s death just after the verdict, Mencken’s writing passed into impressively hostile obituary concerning a man who “couldn’t be President, but he could at least help magnificently in the solemn business of shutting off the presidency from every intelligent and self-respecting man” (223).

Twenty-first century readers are likely to be taken aback at first by Mencken’s repeated references to the “darkies” of the American South and his own Baltimore. His clearest positions on race relations are however set forth in some of the last essays collected here, where he earnestly remarks himself as “a sincere friend of the colored people …. In many and obvious ways they are superior to the whites against whom they are commonly pitted. They are not only enormously decenter; they are also considerably shrewder” (285). In a different, earlier “Venture into Therapeutics” he even suggested with startling prescience that Islam would be a desirable tonic for African-American culture (269 ff.)

Joshi very helpfully provides a glossary of names which Mencken drops and hurls, but whose now expired contemporaneity will make them obstacles to the modern reader, and he supplies the text of biblical citations that would otherwise go unappreciated by most readers without scripture at their elbows. Joshi makes a few misses in his efforts to clarify Mencken’s cultural references though, such as mis-identifying “September Morn” as “a translation of a German song … by Joseph Marx” (305), rather than the scandal-provoking painting by Paul Émile Chabas. Joshi would have been better off not to note “The Girl with the Whooping Cough” as “unidentified, possibly fictitious” (273, 305) when it was an actual stage comedy suppressed on Broadway in 1910. Still, his work in organizing and presenting this material is good on the whole, and I’m in debt to his editorial labors for my chance to read this book. [via]