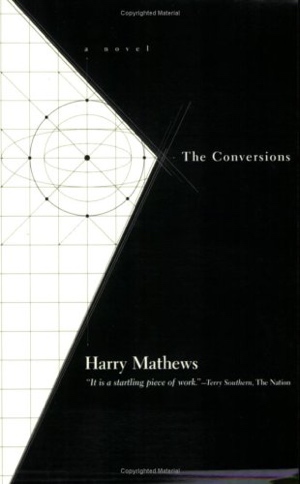 The Conversions begins with a group making preparations for an elaborate race between worms (yes, I said worms!) in the luxurious apartments of eccentric Grent Wayl. The winner takes home a curious prize, a ritual adze, covered in arcane figures and scenes that unravel in meaning as the novel progresses. When Wayl suddenly dies, a different race is on to decipher the adze and answer questions about it in order to win his sizable estate. Through a series of stories within stories that take him around the world, the main character seems to advance toward the prize, traversing the labyrinth of his own psyche along the way. He is beset by doubts as to the nature of what trails he is following, the interesting characters met along the way, and the overwhelming feeling that he has been tricked and that the whole journey is based on a hoax. In his first novel, originally published by Random House in 1962, Harry Mathews’ elegant prose and delight in the construction of the chase carry the momentum of the tale. There is a patchwork quality to the various stops the protagonist makes along the way, and in this you can almost see the author working behind the curtain even though we are told to pay him no attention. In The Conversions, and several of his other novels, Mathews is clearly indebted to the French writer Raymond Roussel, who taught him that what happens between the covers of a book is just what happens between the covers of a book, in other words, that a novel can be appreciated on its own terms and not necessarily on how it relates to the outside world. The novel is its own self-contained world, and whatever transpires through its storytelling supports its own logic, its own “reality.” This frees imagination to really do the work it intends from the outset, to create a work of fiction. In the words of Hassan-i-Sabbah, the Old Man of the Mountain, “Nothing is true, everything is permitted.” [via]