Hermetic Art: Collectanea Hermetica Volume 3 [also], part of the series edited by W Wynn Westcott, one of the founders of the Hermetic Order of the Golden Dawn, has recently been released this month in a newly typset and corrected edition by the Golden Dawn Research Trust, newly edited by Darcy Küntz, with an introduction by Tommy Westlund. 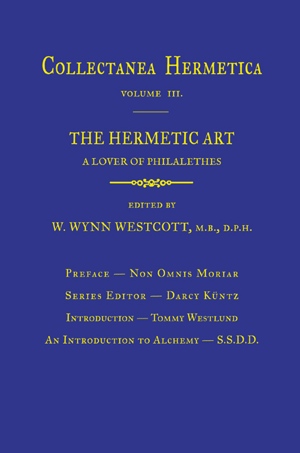 “This book was part of the curriculum studied by members of the original Order of the Golden Dawn. The Hermetic Art by a Lover of Philalethes is an essay regarding the Art of bringing all imperfect metals into perfection. The volumes of Westcott’s Collectanea Hermetica appeared over there three years from 1893 to 1896 when the Golden Dawn was at its peak. In every volume the intellectual integrity of the authors is evident, as is an eagerness to bring academic respectability to subjects derided by their contemporaries.

This is the first corrected edition since Westcott’s edition which was originally published in 1894. This edition has been Corrected against the original editions: Part 1 (1714); Parts 2 & 3 (1715); Westcott’s edition (1894). Parts 2 & 3 were never reprinted by Westcott and this is the first edition to contain all three Parts together. ‘The three parts transform the complete treatise into a coherent document” from Tommy Westlund’s Introduction. It also contains two reviews from 1894 and a rare illustration of an Athanor which Geber invented (1542).’

The “Hermetic” art of Alex Andreev

The “Hermetic” art of Alex Andreev at “Hermetic Art“