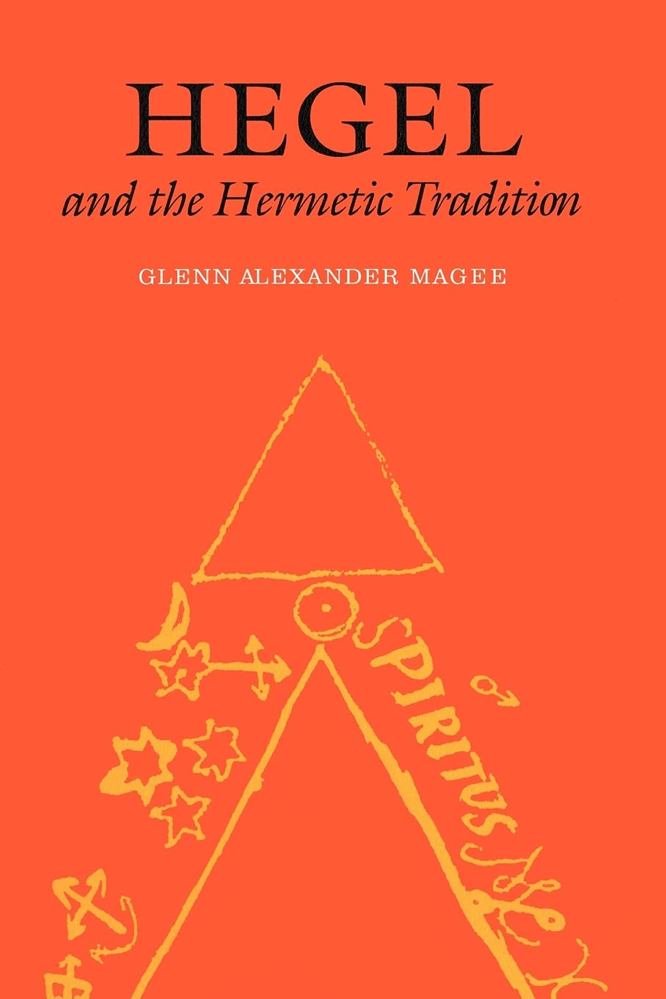 Writing very consciously in the vein inaugurated by Frances Yates’ Giordano Bruno and the Hermetic Tradition, Glenn Magee details the esoteric contexts and underpinnings of the work of G.W.F. Hegel. This is not a work of tendentious revisionism. The wonder is not that Magee can read Hegel as a Hermetic thinker, but that — in light of the evidence which he marshals — so many others have managed to avoid the obvious conclusion. A review from The International Philosophical Quarterly quoted on the back cover of my copy claims that the work exposes “Hegel’s dark side,” but Magee makes no such judgment. When he writes about indicting and convicting Hegel of Hermeticism in his final chapter, he is very plainly using a cacophemistic rhetorical figure. Hermeticism as Magee defines it (and he does a competent job of doing so) could be “dark” to the conventionally pious Christian, or to the rationalistic secular sorts who may have had the upper hand in the 20th-century study of Hegel, but it wasn’t to Hegel, nor to Magee nor me.

I came to this book after reading a good deal of the “Young Hegelian” Ludwig Feuerbach, for whom Hegel figures as the culmination of an obsolete crypto-theology, and I was open to the possibility of heightening my intellectual sympathy for Hegel. Magee pulled that off quite nicely. After reading his treatment of The Phenomenology of Spirit as an initiatory rite (!) I found myself for the first time ever actually considering a full read of that forbidding tome.

Magee has a lot to say about the kabbalah, which he understands to have been influential on Hegel both directly (in Rosenroth’s Kabbalah Denudata and the like) and via the work of Jacob Boehme. Most of his points are fairly sound, but he did not impress me as a scholar of kabbalistic history. He seemed thoroughly dependent on Gershom Scholem. And his transliterations were distractingly erratic; for instance, he wrote Ayin for AIN, although the same word was elsewhere Ein (in Ein Sof).

Likewise, Magee’s appreciation of the history of alchemy seems adequate for his task, but not thorough. In this case, I think he errs (in a way he does not with the Kabbalah) in deeming alchemical methods to be all of a sort. When he declares that “there is no way to decide if the alchemical opus is intended to be entirely figurative or symbolic, or if there is both a literal, physical operation of some sort coupled with a mystical doctrine” (209), it seems clear that he could benefit from the work of recent researchers into alchemy in the history of science, such as Lawrence Principe.

I have no such complaints about Magee’s efforts to contextualize Hegel with reference to the development of Rosicrucianism in Germany. In this case, he draws on appropriate and reliable scholarship in a way that has apparently been neglected by earlier Hegel scholars. Merely in passing, I was delighted to note Magee’s observation about the genesis of the phrase “immanentize the eschaton” in The New Science of Politics by Eric Voegelin (1952), where he is discussing the effects of Joachimist prophecy.

I was cumulatively impressed with Magee’s thesis, which at one point he puts like this: “Hegel’s speculation, as I have characterized it, is a sophisticated, post-Kantian reappropriation of the memory magic and ‘active imagination’ of Hermetic thinkers such as Bruno and Boehme” (103). He covers Hegel’s ideas about magic, and the essential identity between Hegel’s “speculative philosophy” and esoteric (or mystical) religion. I strongly recommend this book to those who enjoy readings in the history of ideas, and who want to be able to appreciate the aquifer feeding a wellspring of 19th-century philosophy.