Faustus is “a fiendishly tactical card game of temptation and demonology for three to six sorcerers” from Talking Skull, designed by Nimrod Jones and art by George C Contronis.

“Doctor Faustus made a pact with the demon, Mephistopheles, to have power over all demons and so become the most powerful magician of all time. You, too, have entered into such a pact, but can you really control what you have unleashed or will they take control of you?

Secrets are power and temptation! Battle with other magicians to ensure that you, and only you, escape the price for such power: Damnation!

Faustus is a game of secrets and temptation. In this game for 3 to 6 players, you take on the role of a magician summoning demons onto yourself and casting them at other magicians whilst tempting them with your hidden secrets. But only one can escape damnation. Only one! One goes free else all are damned!

This card game, designed by Nimrod Jones with stunningly atmospheric art by George C. Cotronis, is the flagship game for Talking Skull, due for release in October via our print partners, Chronicle City.

With two versions of the game and optional rules, this game can be played by both novice and experienced gamers. In the Basic version of the game all that matters on the demons are the numbers; keep your numbers low and doom the rest. In the Advanced game you experience the full power of the demons under your command with each of the 40 Demons offering a unique power that is yours to command while they are in bound to your Pact.

Read about the development process of this game in The Road to Faustus.” [via] 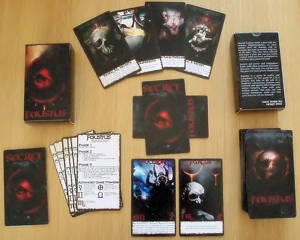