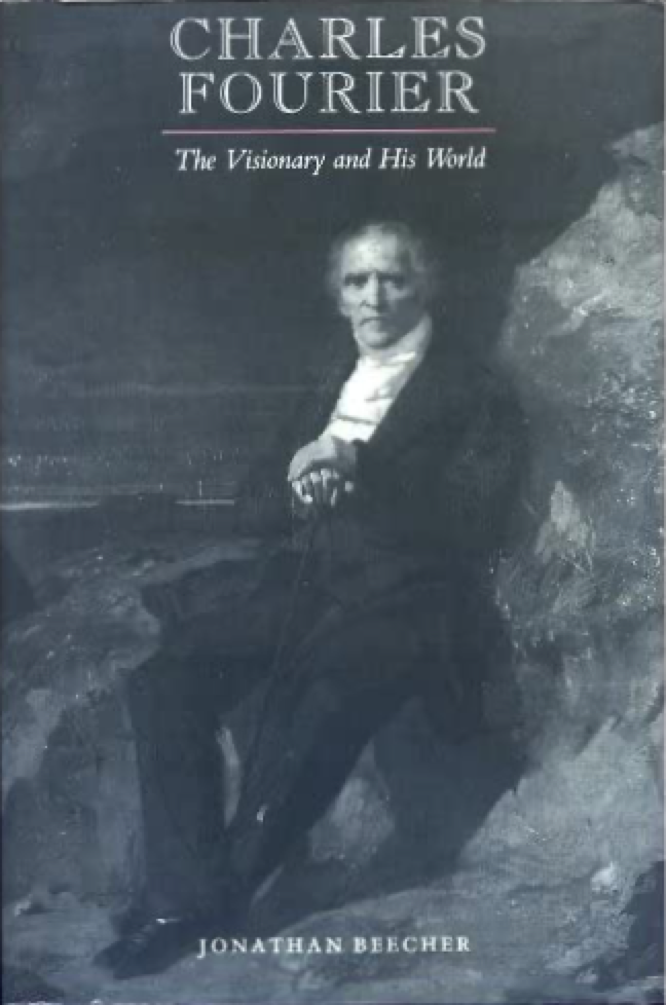 Jonathan Beecher’s hefty intellectual biography of Charles Fourier (1772-1837) was groundbreaking when it was first published in 1986, and I doubt that it has been superseded by later scholarship in any significant respect. While reading, I often found myself comparing it to the historical study of Fourier’s contemporary William Blake by David Erdman, which was also structured along biographical lines. But while I found prior familiarity with Blake’s writing essential to appreciation of Erdman’s treatment, Beecher makes no such presumptions for Fourier, whose works have been so marginalized–if not outright suppressed–among general readers and scholars alike.

The book is divided into three major sections. The first, “Provincial Autodidact,” traces Fourier’s early life and first writings, his encounter with his “first disciple” Just Muiron, and the project of composing his magnum opus Traité de l’association domestique-agricole. The central part of Beecher’s volume goes into great detail on Fourier’s ideas as set forth in his works, including those that remained unpublished during his lifetime. In this section Beecher is often concerned to rescue Fourier from the Fourierists who later omitted and “improved” upon various details of their “master’s” great and unified conceptual edifice. The third part, “Parisian Prophet,” details the development of his following, his interaction with the ideas and adherents of the other early socialist leaders Saint-Simon and Owen, preliminary ventures in application of his theories, his eventual estrangement from the movement that his works had founded, and his demise.

Fourier claimed that his entire theory flowed from the “secret of the calculus of passionate attraction” (193)–earlier translators prefer “passional,” and I think this distinctive term has some merit. (It denotes “of the innate passions” rather than “in an impassioned manner,” although the two are certainly not exclusive of one another.) Proposing to do away entirely with individual repression in favor of expression of the passions, Fourier maintained that what was needed was the correct form of social organization, allowing the diversity of innate passions to cover the gamut of necessary work. The consequent development would be Harmony, a stage that would obsolete Civilization. Throughout his writings, Fourier consistently uses “civilized” as a pejorative to describe the ills of the society in which he lived. He was an unflinching feminist and an extreme sexual libertarian, and Beecher is not the only reader of Fourier to draw comparisons to Francois Rabelais on the one hand and Wilhelm Reich on the other.

At its most expansive, Fourier’s theory supplies a complete past and future history of the world, a distinctive cosmology, and a metaphysics including reincarnation. He anticipated that Harmony would produce beneficial changes in weather and climate as well as alterations in human physiognomy. His most exotic prognostications–and it is not always easy to tell if these are satirical–included the ideas that the oceans would become potable, the moon would vanish and be replaced with five new satellites, and humans would grow a new limb called the archibras–an immensely long prehensile tail with a small hand on the end of it.

As Beecher notes, the milieu in which Fourier’s intellect first matured included “esoteric Freemasonry and illuminism … Rosicrucianism, Swedenborgianism, and a variety of other mystical cults” (38), and while Fourier always presented his theory as sui generis, early adherents including Just Muiron were often attracted by what they perceived as similarities to Martinism and other theosophical systems. More recent scholarship by Julian Strube touches on the Fourierist contributions to French occultism, especially in the work of Alphonse Louis Constant (Eliphas Levi), and Fourier also inspired Anglophone occultists such as Richard J. Morrison (Zadkiel). Later, he was to be embraced by the Surrealists as a sainted predecessor.

Lively, relevant, and far briefer orientations to Fourier can be found in Umberto Eco’s The Uses of Literature (213-255) and Peter Lamborn Wilson’s Escape from the Nineteenth Century and Other Essays (5-37), but Beecher’s tome is fully worth the work of reading it. It left me with no doubt that Fourier supplied an important node in the intellectual current where I operate, offering a transformative vision of a society in which Do what thou wilt shall be the whole of the Law.