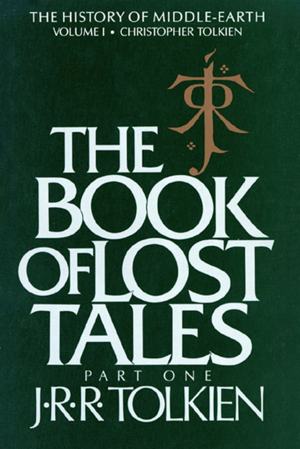 These Lost Tales are part of the “History of Middle-Earth,” i.e. Christopher Tolkien’s exhaustive multivolume autopsy of his father’s creative process in generating the mythology that underlies the world of The Lord of the Rings and The Hobbit. The contents of this book were recovered from old manuscript notebooks, and mostly constitute variant tellings of episodes later reworked in The Silmarillion, concerning the doings of gods and elves prior to the “awakening of men.” They are set in a frame-story according to which various elves of the Lonely Island (Tol Eressea) recount these legends to a human traveler Eriol.

Although the tales themselves are buttressed with copious notes on the source texts and their relationships to the Middle-Earth Tolkien canon, I admit I read little of that material. Instead, I offered the stories themselves aloud to my Other Reader as occasional bedtime reading. We both found the book enjoyable and satisfying that way. (On points where I had particular curiosity, I did read in the editorial apparatus that constitutes nearly half of the book.)

The content and imagery of these stories is very Dunsanian, reminiscent of stories like “The Fortress Unvanquishable Save for Sacnoth” and The King of Elfland’s Daughter. But instead of Dunsany’s lucid-if-ornate prose, we get the affected archaicisms of the aspiring English philologist. That certainly made this material a challenge to read aloud, but it was fun nevertheless. (I’m sure it didn’t hurt that I’ve studied Middle English verse and enjoyed reading those texts aloud.) Reading this material as its own story, rather than a draft of what Tolkien was later to produce, is a pleasant enough experience. It may even be better than reading it with the hope of profound insights into the secrets of The Lord of the Rings, despite all of the younger Tolkien’s efforts to facilitate such discoveries. [via]