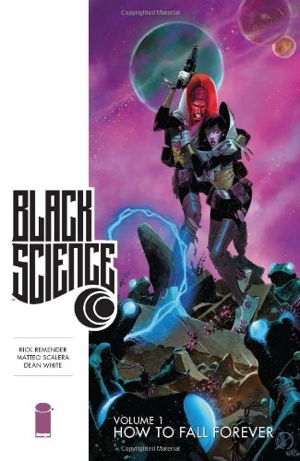 I had noticed the individual issues of this comic series with some curiosity, so I was easily persuaded to pick up this trade paperback collection of the first six at the affordable recommended retail of $9.95.

It turns out to be reasonably intriguing adventure on the “Lost in Space” / broken TARDIS model, with the field of travel being the layered “onion” of alternate realities. There has been sabotage to the travel device (the “pillar”), accounting both for the erratic, uncontrolled course of travel and for the suspicion and antagonism circulating among the members of the team. The inventor’s two children are also (inadvertently) along for the ride, which doesn’t make this a G-rated book, by any means, but heightens the fears and determination of the adult characters.

A member of the team seems to die in almost every issue, a rate which makes the reader wonder if there will be a story left to tell after the next six-issue arc. On the other hand, the correspondences between alternate realities in the “eververse” open the possibility that some slain characters might eventually be replaced with alternate versions of the originals.

The artwork is very dynamic and colorful. The narrative exposition is rather roundabout, so while it is a fast read, it requires paying close attention to grasp the fairly complex web of personal antagonisms and affections among the team. There’s no satisfactory conclusion at the end of issue six, and I’m interested enough to read a second collection when it comes out. [via]