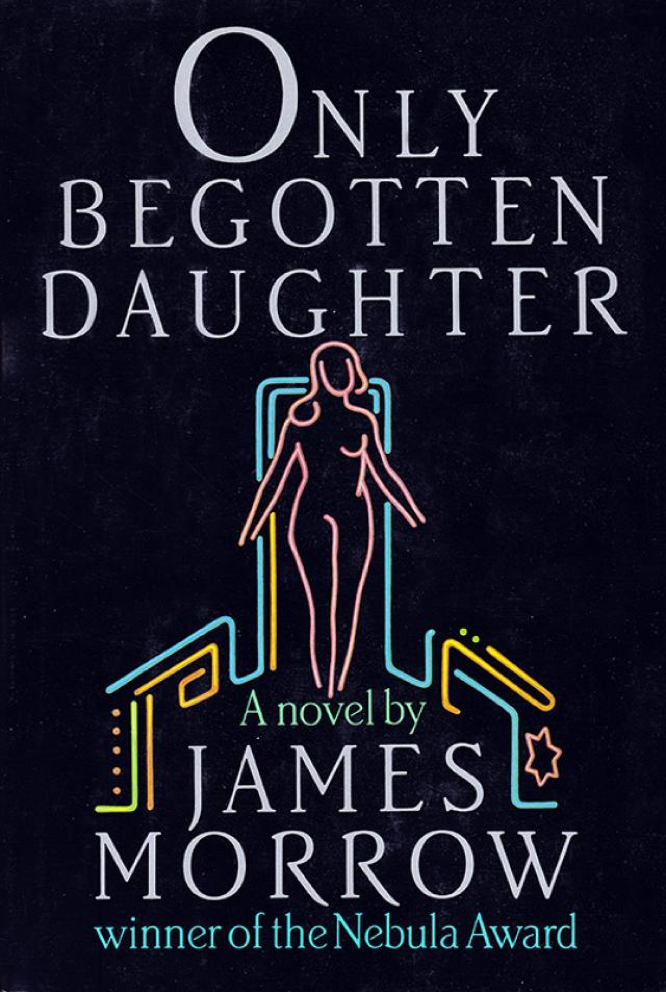 Only Begotten Daughter is an enormously clever religious satire, much more incisive than Morrow’s routinely lauded Towing Jehovah. But I’ll probably never re-read it, because the story is just too goddamned sad. Framed as an extended suicide note, the fictionalized memoir stylings of this James Morrow satire reminded me more than a little of the delightful novels of Lee Siegel. Topically, however, it was a fit with my recent read of Kim Stanley Robinson’s Lucky Strike, as science fictional reflections on human agency in the atrocity of the deployment of the atomic bomb.

The narrator of Shambling Towards Hiroshima is Syms Thorley, an emeritus monster actor of B-movie fame. While sometimes adverting to his 1980s circumstance in the wake of a fan convention at a Baltimore hotel, the book is mostly trained on his past involvement in a secret WWII military project intended to provoke Japanese military capitulation in the face of actual fire-breathing leviathans bred from iguanas.

The book is a quick read, with vivid, often hilarious episodes and an ultimately sobering message. If I had read James Morrow’s first novel The Wine of Violence when it originally appeared, I probably would have found it much more bizarre than I did in my actual encounter with it, after having read much of his later fiction. Although it is quite unusual for a science fiction novel, it is actually the conventional space opera context that most sets it apart from his larger oeuvre, while it exhibits many themes and features common to his work as a whole. These include bereavement of central characters, materialization of ethical and metaphysical concepts, and moral inquiry verging on gentle didacticism.

The principal character of the story is Francis Lostwax, an exo-entomologist whom we encounter with the rest of the crew of the spaceship Darwin on return from a successful interplanetary expedition in the UW Canis Majoris system, to which humans had emigrated from Earth many generations previously. The scientists are forced to land on an unexpected planet, where they encounter a quasi-utopian society descended from a lost colony-ship sister to the one that brought their ancestors to New Earth (“Nearth”). These pacifist Quetzalians live behind fortifications which protect them from the rapacious, cannibalistic Neurovores.

In keeping with its title, the book poses several central questions about aggression and the capacity for violence. Are they intrinsic to humans? Would we be better without them? Despite the fact that the characters are in some measure ciphers for answers to these questions, I did care about them as a reader, and I would recommend the book as a fiction as well as philosophy. [via] City of Truth is one of the shortest of James Morrow’s novels, but it has as much conceptual heft as any of them. The setting is a near-future dystopia in which the denizens are conditioned for absolute honesty and candor. I was reminded of many other books, from Zamiatin’s We to The Physiognomy of Jeffrey Ford, in terms of the way that an imagined totalitarianism and its resistance are conceived. Even outside of the satirical fantasy genre, however, the book is unusual for placing a father’s relationship to his son at the center of the main character’s motivation.

Morrow is best known for his autopsies and parodies of religious themes, and there is certainly much relevant to theology in a book which refers repeatedly to “putative souls” and where examples of lies include “God protects the innocent” and “Love is eternal.” But the heart of this book is an exploration of philosophical matters that have an equal “secular” importance. The name of the protagonist Jack Sperry reads to me as derived from spero (Lat. “I hope”), which points to the ethical business of the story, and the epistemological issue is mentioned in passing by one of Sperry’s insurgent (“dissembler”) acquaintances as “the confusion of the empirical with the true” (87).

The book has many moments that are terribly funny, but it revolves around personal tragedy as well as the systematic cruelty of a society extrapolated from benevolent rational motives. It is short and quick-to-read, but not for the faint of heart. [via]