Hermetic Library Fellow John Michael Greer reviews The Secrets of John Dee: A Commentary on his Alchemical, Astrological, Qabalistic, and Rosicrucian Arcana [Amazon, Abebooks, Publisher] edited by Gordon James at The Medicine of Metals in the Caduceus archive. 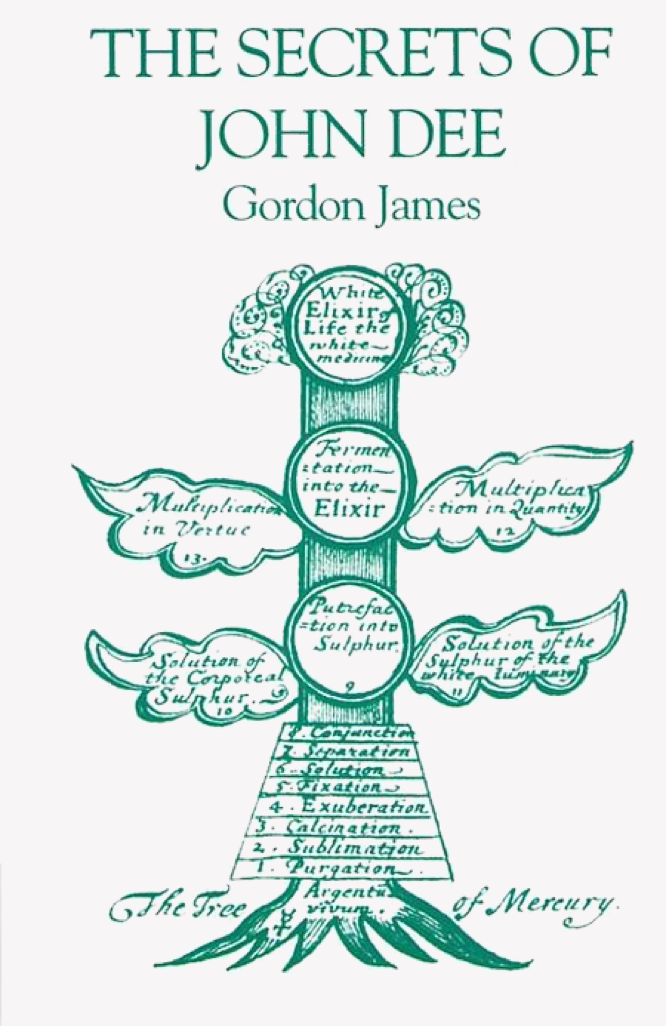 One of the minor alchemical treasures in the British Library is a manuscript (Harleian 6485) entitled “The Rosie Crucian Secrets, their Excellent Method of Making Medicines of Metals, also their Lawes and Mysteries:, and attributed to the great Elizabethan magus John Dee. This is one of a collection of Hermetic and magical documents copied out by one Peter Smart near the beginning of the eighteenth century. Like most of the manuscripts in this collection, the “Rosie Crucian Secrets” is something of a hodgepodge, containing materials on the making of metallic medicines, a letter (supposedly from John Frederick Helvetius to John Dee) describing a transmutation, a glossary of unusual words supposedly found in Dee’s writings, and a discussion of the laws of the Rosicrucian Fraternity.

Like most of the manuscripts in the collection, too, a certain whiff of fraud hangs over this one. The first third of it is nearly identical with Elharvereuna, a book on metallic medicines published by the Jacobean occult plagiarist John Heydon in 1655; the last part is an adapted translation of Michael Maier’s Themis Aurea, published in 1618; very few of the words in the glossary are in fact to be found anywhere in John Dee’s works; and the letter Helvetius (which, incidentally, is well attested elsewhere) was certainly not written to John Dee, given that Dee died in 1608 while Helvetius was not born until 1625!

Despite this, the manuscript is well worth attention; whatever its origin, it provides a detailed and unusually clear look into the processes of metallic alchemy and spagyrics (alchemical medicine). Its value led E. J. Langford-Garstin, and important figure in Golden Dawn circles early in this century, to prepare a transcription, and this was finally published by Aquarian Press in 1985. Unfortunately, Langford-Garstin’s version seems to have been inaccurate in a number of places, with important pieces left out and some of his own material inserted; furthermore, this edition has been out of print for years, and so those with no access to the British Library and its collections have had a long wait for a new and better version.

Fortunately, this is now available. Gordon James’ edition omits the letter of Helvetius, the glossary and the translation of Maier’s Themis Aurea, concentrating on the core of the manuscript — the description of the “Excellent Method of Making Medicines of Metals.” James has modernized the spelling and grammar, a definite help to the Elizabethan-impaired, but otherwise presents the material as it appears in the manuscript. He also includes the symbolic Trees of the Planets, although the reader is unfortunately not given information on the relation of these to the text in the original manuscript.

James has also provided a detailed commentary, presenting his own interpretation of the text’s meaning, which is largely based on the spiritual-somatic approach pioneered by Paul Foster Case and popularized by Case’s books and study courses. His analysis of the text, accordingly, draws extensively on the use of gematria to divine the hidden meanings of various technical terms, on Case’s particular brand of mysticism, and on parallels taken from Hindu yogic sources. He makes it clear in his introduction that, as far as he is concerned, alchemy is to be understood as a purely internal yoga of the spirit, and he dismisses any attempt at laboratory alchemy as misguided folly.

This is likely to be greeted with cheers or boos, depending on the reader’s own take on alchemy, but the dogmatic certainty with which James makes his pronouncements is somewhat irritating at best. Another mild irritation is the fact that his commentary is interspersed throughout the text, divided from it only by brackets; some less obtrusive way of connecting commentary and text might have been more useful to those who take a different approach to the Great Work. Still, the inconvenient is a minor one, more than offset by the value of the text itself — seen from nearly any alchemical perspective. The more one learns about Dee and his work, the more complex the terrain becomes—and the more threads of the modern world one can trace back to this crucial historical flashpoint. Taken together, it seems that Dee may be responsible for nothing less than our present world. A True & Faithful Relation Of What Passed For Many Years Between Dr. John Dee And Some Spirits

A True & Faithful Relation Of What Passed For Many Years Between Dr. John Dee And Some Spirits by Maarten van der Vleuten, from the Netherlands, with graphic design and cover illustrated by Phil Legard, is a 2010 album inspired by the works of John Dee and Edward Kelly, which may be of interest.