Templar is a graphic novel by Jordan Mechner (of Prince of Persia fame), illustrated by LeUyen Pham and Alexander Puvilland. 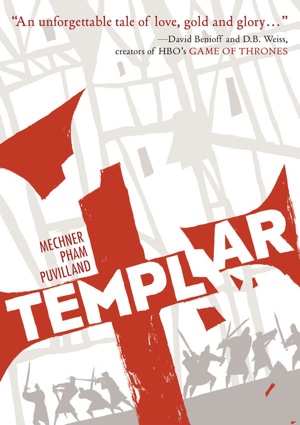 Over on Boing Boing, you can check out a review by Cory Doctorow at “Templar: historical caper graphic novel from Prince of Persia creator” and gander through some pages at “Templar: new 480-page graphic novel about the Knights Templar [excerpt]”

“Martin is one of a handful of Templar Knights to escape when the king of France and the pope conspire to destroy the noble order. The king aims to frame the Templars for heresy, execute all of them, and make off with their legendary treasure. That’s the plan, anyway, but Martin and several other surviving knights mount a counter-campaign to regain the lost treasure of the Knights Templar.

With gorgeous illustrations by LeUyen Pham and Alexander Puvilland and lush coloring from Hilary Sycamore, this 480-page, full-color, hardcover graphic novel by Jordan Mechner is itself a treasure.”