The End of a Road

The End of a Road by John M Allegro has recently been published in a second edition by Rousseau, etc., in May, 2013, and may be of interest. 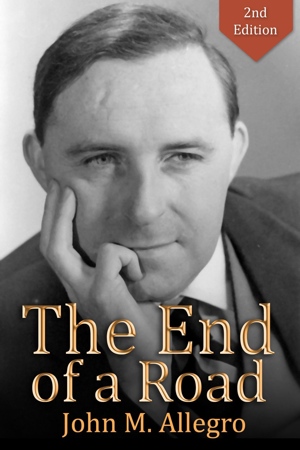 “In 1970, John M. Allegro published The Sacred Mushroom and the Cross, arguing that the early Christians belonged to a drug cult, their sacrament consisting of hallucinogenic mushrooms. The book contained a large amount of linguistic data to support Allegro’s speculations. In his follow-up book, The End of a Road, Allegro considered the philosophical ramifications of having undermined Christianity and hence, for many people, religion altogether. He argued that abandoning religion is not tantamount to abandoning morality; rather, it should enable a more honest and straightforward approach to morality. This new edition includes a new foreword by Judith Anne Brown, author of John Marco Allegro: The Maverick of the Dead Sea Scrolls, as well as two new essays. These are an essay by Franco Fabbro discussing a mushroom mosaic in an early Christian church in Aquileia; and an essay by John Bolender discussing the vagueness of the concept of religion, which raises questions about the precise target of Allegro’s polemic and challenges attempts to defend religion as a biological adaptation.”