Hermetic Library Fellow T Polyphilus reviews The Cult of the Asherah in Ancient Israel and Judah: Evidence for a Hebrew Goddess by Judith M Hadley. 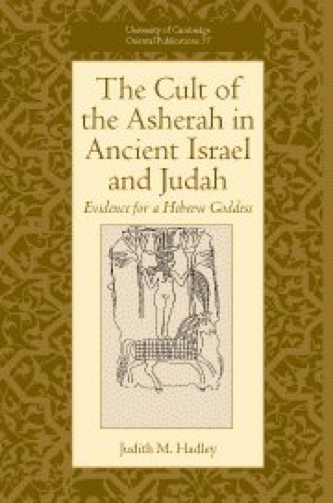 This dissertation-based monograph on Asherah and the asherahs in ancient Hebrew religion is very much addressed to specialists. Author Hadley does a thorough job of surveying prior research and entering into dialogue with it in a way that was doubtless gratifying to her degree supervisor(s) at Cambridge, but is likely to be taxing for any general reader. Her primary focus is on the inscriptional data from Khirbet el-Qom and Kuntillet ‘Arjud, supplemented by thorough surveys of other relevant archaeological finds. The discussion assumes a reader’s familiarity with techniques of ancient Hebrew paleography and philology.

Some reading frustration is occasioned by comparisons to visual evidence that is cited but not reproduced in the book. I understand that it may not have been possible to obtain publishing rights to the relevant images, but I feel like most of those references to absent graphics could have been relegated to notes, to keep that opacity out of the main text. What’s more, the in-line citation style occasionally makes the text virtually unreadable as exposition; in those cases it’s just a block of references.

None of which is to deny that I got some useful information from this book that I hadn’t yet encountered elsewhere. I was especially interested in the likely origins of Asherah in the Ammonite goddess Ashratu(m). In contrast to the impression I took from the contemporaneous study Only One God?, Hadley is more ambivalent about Hebrew consciousness of Asherah as a goddess during the Monarchical period, preferring the beneficence of an asherah temple artifact as the explanation for “Yahweh and his Asherah” in the debated inscriptions.

The four-page “Conclusion” is very clear, and for the non-specialist with some prior awareness of Asherah scholarship, it sufficiently communicates most of the useful evaluations that are worked out in great detail in the body of the book. [via]