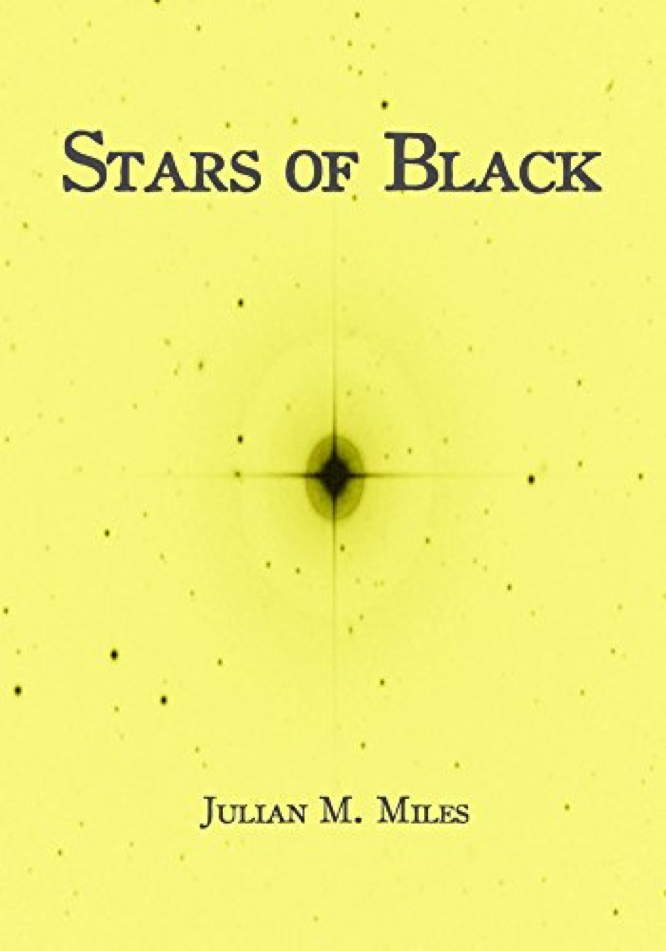 Stars of Black is a self-published collection of weird horror short stories by Julian M. Miles. Although the jacket copy also refers to Ambrose Bierce, it’s clear that this cycle is rooted in the four seminal jauniste stories by Robert W. Chambers from The King in Yellow. Chambers’ tales have their geographic orientations to America and France, but Miles works with characters who are chiefly English, and typically in England.

These stories have an internal consistency, and in a few cases there are actually allusions between them, but there is no direct contiguity of plot or character. Still, this makes for a tighter and more rationally integrated set of tales than one usually encounters in the jauniste tradition. Although the stories have a fairly wide-ranging historical scope, the ones set in the twenty-first century generally engage a premise according to which clandestine agencies are urgently concerned to suppress circulation of the play The King in Yellow, because of its hazard to society as a whole. Some of the stories most connected to this conceit are “Tatters,” “House of Sorrows,” “Vade Mecum,” “Perfidious Counsel,” “Heart’s Abyss,” and “Storm Warning.”

Miles avoids any influence of the mutation of jauniste lore in fantasy-horror gaming, although he alludes to it once, when the heavy metal musician of “Implosion” works through “a load of stuff from a games company who seemed to have the goods on all of it. I read through the lot, as soon as they arrived, and thought it was all a bit trite: not even remotely what I was looking for” (156).

There are two stories that are outliers, being more directly concerned with the extra-terrene realm of Carcosa itself, without any framing in quotidian reality. “Thirteen of the Clock” is a very short piece that seems to integrate the King in Yellow lore with Edgar Allan Poe’s “Masque of the Red Death.” “The Last King” is the penultimate and longest selection in the volume, and it enlarges in great detail on the doom of Carcosa and its King. The style here reminds me more of Clark Ashton Smith’s otherworldly brocades than the enigmatic weird of Chambers (or the spare parable of Bierce), and I’m glad that this story was positioned at the end of the book so that it didn’t influence my reading of the others. On its own, it’s an interesting and somewhat satisfying read, but I would have found it distracting as an implicit context for the other, subtler work in this collection.

This book, more than any other I’ve read, works to affirm a specific mythos, as opposed to a more generalized mood, mechanism, or menace of the Pale King. Cassilda and Camilla do not appear, but the women of Carcosa all share that C initial. Is it merely a lunar hieroglyph? Or does the voiceless velar stop establish a class for which “Kupris … the Greek or Syrian Aphrodite-Venus, is the outstanding example in Theogony” (AC, “The God-Letters” in MWT)? Stars of Black is obscure but easy to obtain, and worth the bother.