Hermetic Library Fellow T Polyphilus reviews Only One God? Monotheism in Ancient Israel and the Veneration of the Goddess Asherah by Bob Becking, & al. 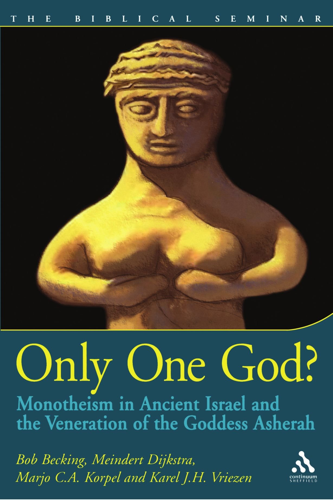 The turn of the millennium seems to have been a real high season for scholarship regarding ancient Hebrew religion and the goddess Asherah, for which important archaeological evidence had been amassing throughout the late twentieth century. The book Only One God? consists of a set of lectures originally given by faculty of (and at) the University of Utrecht, and was first published in Dutch. This English edition was issued in 2001. Of the four authors, Meindert Dijkstra is responsible for about half of the total content, while Bob Becking is the only other author to contribute more than one item, and he co-wrote the introduction and supplied the concluding paper. (The four are credited in alphabetical order.)

On the whole, the authors take a fairly conservative position relative to the historical validity of the relevant biblical texts. They are mostly concerned with the “Monarchical Period” from the ninth through sixth centuries B.C.E., but their few hypotheses about earlier history do not challenge the biblical account of the Davidic united kingdom, despite the paucity of archaeological evidence for it. While not alleging deliberate misrepresentation on the part of biblical authors and redactors, they do take into account authorial motives, and are alert for omissions as well as the facts that may have informed judgments in the biblical texts. They presume interested human authors, not an unobstructed divine one, for the Hebrew scriptures. The aggregate conclusion regarding the history of Hebrew religion in the Monarchical Period is that it was far more diverse (“pluriform”) than customary readings of the bible would suggest. Up until the period of the Babylonian Exile, a “pure” monotheistic Yahwism was the goal of a set of reformers grounded in the work of prophets, but it was not the only religion of the people or the governing elite.

Dijkstra’s chapters provide important context for this discussion throughout the book. In “I Have Blessed You by YHWH of Samaria and His Asherah,” the inscriptions from Kuntillet el-‘Arjud and Khirbet el-Qom are detailed and supplied with archaeological and historical situations. “El, the God of Israel–Israel the people of YHWH” is a discussion of the relationship between the Canaanite creator-god El and the Hebrew YHWH, which suggests that the latter initially developed from the former, and eventually (within the context of official Hebrew religion defined by the bible) subsumed the original deity. Since Asherah was originally the spouse of El, this series of developments is instrumental to understanding her likely role and status in ancient Israel. “Women and Religion in the Old Testament” is primarily concerned to tease out the “muted” evidence of Hebrew scripture regarding the participation of women in the public and private cult of the Monarchical Period. Dijkstra does not suggest women had anything like a parity with men in the public functions of religion, but that they had a more prominent one than in the Exilic and post-Exilic periods can be surmised from the pejorative way in which their religious work is treated by the scripture codified in that later era.

Vriezen’s “Archaeological Traces of Cult in Ancient Israel” is concerned with altars, figurines, and and other objects, and the extent to which any of these furnish evidence for religious practices regarding Asherah. There is a classification of three types of altars and four types of figurines and a discussion or relevant iconography. The lecture ends with an interesting discussion of the kawwanim or cakes offered to the Queen of Heaven, which survive only in textual reference, but nevertheless supply an important set of ideas about the worship of Asherah.

In “Asherah Outside Israel,” Korpel provides a survey of Asherah references in non-Hebrew societies of the ancient world, and then focuses on the identification between and confusion of Asherah and Ashtart in the biblical texts. In Ugaritic accounts, Ashtart is Asherah’s daughter. Korpel seems to have accepted on some level the biblical condemnation of Asherah, as evidenced by suggesting that Jezebel was responsible for the Asherah cult in Israel. In the light of other theses in this book and elsewhere, such a suggestion seems off the mark, both in attributing a novelty to Asherah for Monarchical Period Hebrews, and for stigmatizing Asherah as a foreign goddess (Jezebel having been a Philistine princess).

Becking’s “The Gods, in Whom They Trusted …” is focused on a very particular piece of historical evidence: the Sargon II Nimrud Prism IV:32, which describes the spoliation of the temple in Israel, with “the gods in whom they trusted” as part of the booty. Becking very thoroughly establishes the credibility of this text for demonstrating the use of divine images in the official cult of ancient Israel, and he capably eliminates the opposing hypotheses. In his concluding paper “Only One God?” he explores the possible theological consequences for the revised historical picture of the Monarchical Period found in this book. While dismissive of the prospect for a revived cult of Asherah, he proposes that the knowledge of ancient Hebrew goddess worship and veneration of images should undermine the extent to which monotheism can or should be taken as an axiomatic element of “religion” in the Abrahamic traditions.

Only One God? is a scholarly document, not a popularizing account of the modern discoveries regarding Asherah worship. It is worth the attention of those who are interested in the genuine evidence and serious arguments around the phenomenon. [via]