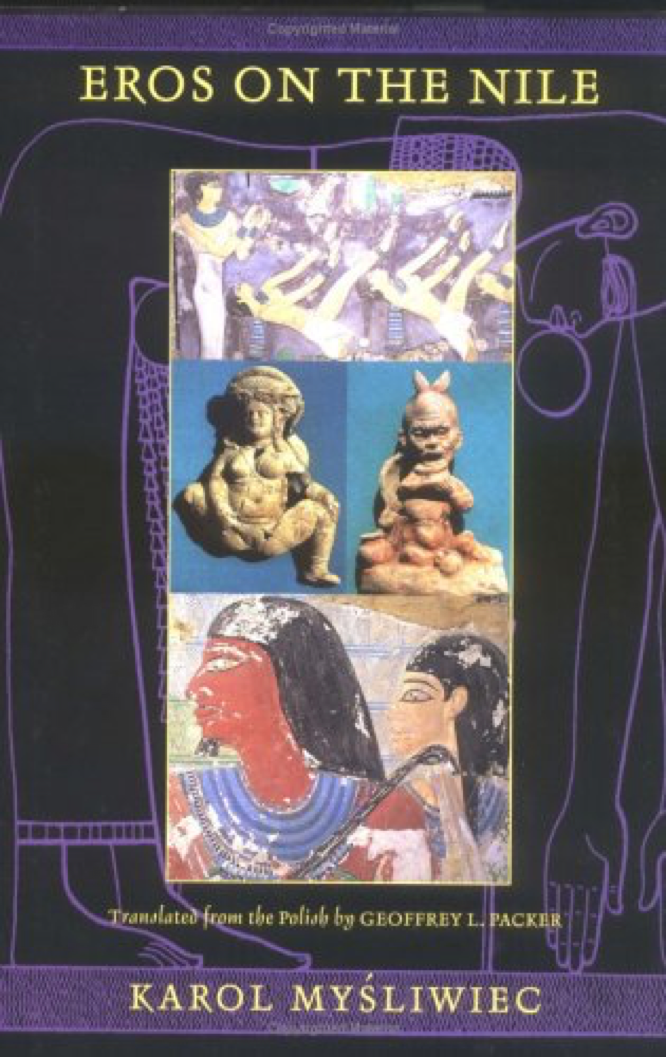 Eros on the Nile is a clear and intriguing survey of its topic: sexuality in the civilization of ancient Egypt. The text is structured along a sort of metaphysical descent: beginning with the sexual aspects of theogony and cosmogony, it descends through the sex-lives of principal gods, to the general mechanisms of fertility cults, the use of divine pedigrees in dynastic legitimation, and finally through magical and medical lore to the common mores and practices of the culture.

The writer is perhaps the most accomplished Polish Egyptologist of the late 20th century, and his authority is not in doubt, but considering the author and the publisher (Cornell University Press), the absence of scholarly apparatus is somewhat unsettling. I could forgive the lack of full citations, if there were at least some references provided for secondhand claims in the body text. Instead, it is rife with such constructions as “according to several scholars” (60) and the uninformative passive-voice “drawings that are designated in Egyptological literature as satiric-erotic.” (120)

The latter phrase is in allusion to the Turin Papyrus, and I would have liked to know who made that classification (or at least when), since I am not entirely persuaded. (Based on the bibliography, I know at least that it was a characterization accepted by Joseph Omlin in 1973, when he published his groundbreaking German monograph on the topic of the papyrus.) Certainly, there is a temptation for moderns to see mirth or mocking in the subject matter, especially when presented with the alien artistic conventions of Egyptian antiquity. But Myśliwiec presents a persuasive case that the series of drawings deliberately parallels religious documents. To some readers, this feature may indicate parody, but if the author is correct that “the ancient Egyptians themselves did not consider sexual topics shameful, and did not find any ambiguity in these matters,” (viii), then it seems more reasonable to conclude that the Turin Papyrus is esoteric in its transposition of a religious sequence to an erotic register.

While not a coffee-table book or art catalog, Eros on the Nile is in fact rich with useful illustrations: both color and black-and-white plates, as well as many line drawings, and a helpful map. Packer’s translation is lucid, and the whole book can be read in few sittings.