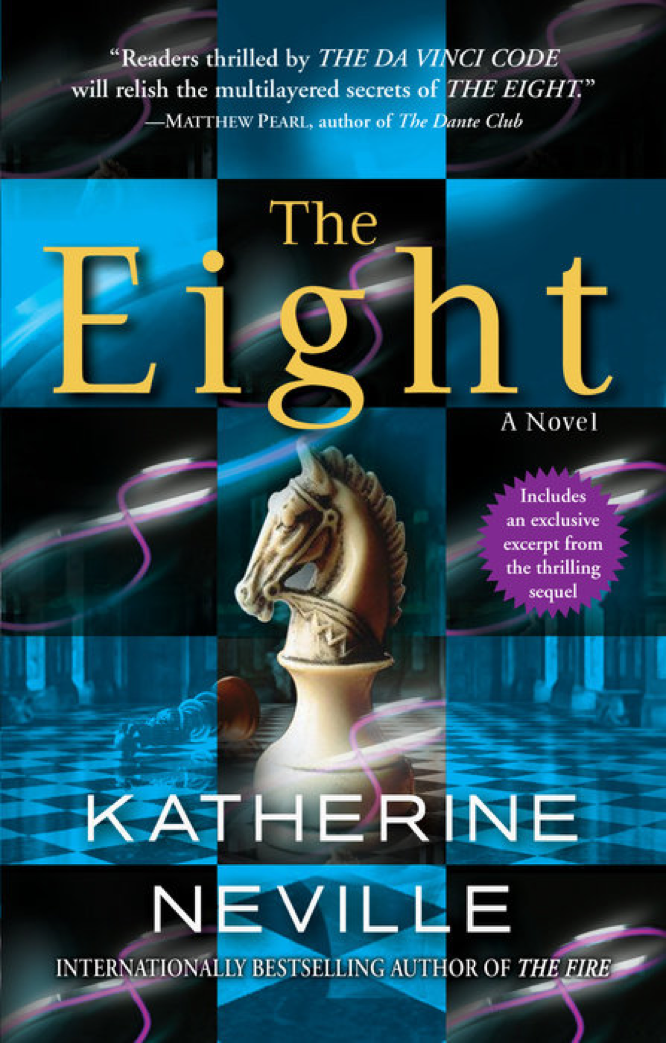 In its early printings, The Eight was compared to Umberto Eco’s puzzle-novels, but it doesn’t really have their literary integrity. It’s probably more deserving of comparison to Dan Brown’s film-treatment-cum-novel conspiracy thrillers, which may have been influenced by (or even modeled on) this book.

Minuses: Use of third-person narrative in 18th-century plotline which is eventually revealed to be contained in a journal. Use of first-person narrative in 20th-century plotline, including chronological inclusion of events unknown at the time to the character describing them. 1970s protagonist of author Katherine Neville is named “Catherine Velis.” Really? It’s hard to care for Velis, who seems to have everything fall into her lap, and to have no real personal attachments: no reference to any prior lover (is she a 24-year-old virgin?) or close peers or blood relations, just an abundance of mentors and benefactors, who are nearly all eventually implicated in the conspiracy. She was a music major at an unnamed college, but never plays, sings, or actively listens to music during the nine months of her story in the book. Out of three or four major plot twists at the novel’s end, I saw a couple of them coming at least 150 pages in advance. I groaned out loud at this passage from page 108, spoken to the French Abbess of Montglane by Catherine the Great in 1791:

“I know the secret is older than the Moors, older than the Basques. Older, indeed, than the Druids. I must ask you, my friend, have you ever heard of a society of men who sometimes call themselves the Freemasons?”

On the whole, it’s a reasonably fun read for those of us who like this sort of thing. The historical parts audaciously conscript an enormous range of famous figures, usually with some level of believability, and the modern parts churn out a bewildering array of heterogeneous clues before the solutions start to cohere. I’m not signing up for the sequel, though.