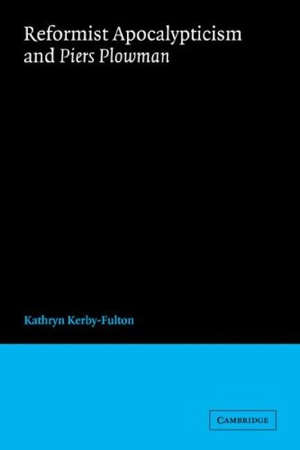 This monograph positions Langland and Piers Plowman in the context of traditions of apocalyptic literature that begin in antiquity, but are subject to significant developments in the high medieval period. Kerby-Fulton points out that previous obstacles to such a study include the tendency to view Langland as a literary author working in the secular dream vision form, and the fact that prior to Langland the genre of reformist prophecy did not appear in the Middle English vernacular. Therefore, there had not been a sustained effort to view Piers as a product of this principally Latin tradition. She positions herself in opposition to Rosemary Woolf, who called various features of Piers Plowman “non-medieval.” Kerby-Fulton contends that the Latin religious literature of medieval England provided ample precedents for such supposed innovations as autobiographical details regarding the dreamer, his variable participation in dream-events, compressed and convoluted allegorical constructions, the lack of visual elements in describing certain visions, and dreamlike scenic shifts (129). She also contradicts Morton Bloomfield’s assertions that narrative irony, absence of a single tutelary figure, and the use of personifications are inconsistent with standard features of apocalyptic literature (95). Using a pair of pre-medieval apocalypses that were popular in medieval England (The Shepherd of Hermas and The Apocalypse of Esdras), Kerby-Fulton demonstrates that these aspects of Piers Plowman are actually consistent with apocalyptic technique. She also addresses the dilemma of dividing visionary writings between “real” autobiographical religious visions and fictional dream visions, concluding that the genre of apocalypse is a tertium quid worth distinguishing (117-120).

By “reformist” apocalypticism, Kerby-Fulton means to indicate those works in which progressive reform or change for the better was an element in apocalyptic prophecy. Such texts constitute a decided minority of medieval prophetic writings. The two major figures of medieval prophecy who loom over the tradition of reformist apocalypticism are Hildegard of Bingen (1098-1179) and Joachim of Fiore (1135-1202). Kerby-Fulton points out that these two represent very different styles of prophetic authorship: Hildegard is visionary and Joachim is exegetical. Neither of them had a simple or direct reception in 13th century England. As a result, their influence on Langland needs to be seen as mediated through works like Gebeno of Eberbach’s anthology of Hildegardian prophecy Speculum futurorum temporum sive Pentachron, and various Joachimist writers and pseudo-Joachite texts. Even so, Kerby-Fulton concedes the speculative element in tracing these influences, which were certainly available to Langland, but are attested as relevant only through their apparent perpetuation in Piers Plowman.

Besides their shared reformist elements, a significant similarity between Hildegard’s prophecy and Langland’s visionary writing is what Kerby-Fulton designates with a term from H. Liebeschütz as “monkish autobiography.” The two major features of this category are self-deprecation and concern for the role of study and intellect (Langland’s ‘Clergie’) in the life of the autobiographer (71). (Augustine’s Confessions provides the archetype of the genre.)

Langland signals participation in the Joachite tradition of prophetic writing first and foremost through his concern with the mendicant orders, since the dissemination of Joachite prophecy in northern Europe was largely performed by Franciscans and their opponents. While no reader is likely to mistake Langland as a cheerleader for the friars, Kerby-Fulton points out that Piers Plowman does not show him to be a typical anti-mendicant either. She acknowledges that Langland’s reformism was unmistakably influenced by the anti-mendicant prophecy of William of St. Amour at the University of Paris in the mid-13th century. But she says “Langland shows little in common ideologically with” later anti-mendicant polemicists like Archbishop FitzRalph (153). Langland was not concerned to champion the secular clergy or the endowed regulars against the mendicants, and he admired the ideals of the friars, while deploring their failure to realize those ideals.

Other Joachite thematic considerations in Piers Plowman include “the concern with distinguishing false apostles, a sense of crisis of leadership, a preoccupation with clerical poverty and the need for repristination through (often) violence and disendowment and, finally, the attempt to periodize history, both past and future.” (172)

Kerby-Fulton rejects earlier attempts to draw a parallel between the Joachimite Trinitarian scheme of past and future history and the triad of Dowell, Dobet and Dobest. But she does propose some Joachite readings of Piers Plowman. The first focuses on the figure of Piers, and suggests that he moves from the “ordo conjugatorum” to the “ordo clericorum” (with intimations of the “ordo eremitarum” in a reenactment of Joachim’s model of spiritual leadership (166). The second reading proposes that the Visio represents the first ‘age’ (under the Father), and the Vita is then the second (under the Son), leaving the third to follow after the catastrophic conflict with Antichrist in the final passus (167). She also points out the similarity of Langland’s historical scheme to that of the Joachite Franciscan Peter John Olivi, who both see the Donation of Constantine as a corruption of the Church, and anticipate “an immanent persecution of the clergy by a type of antichristus mysticus which will herald not the End of the World, but a new age of reform.” (174) [via]