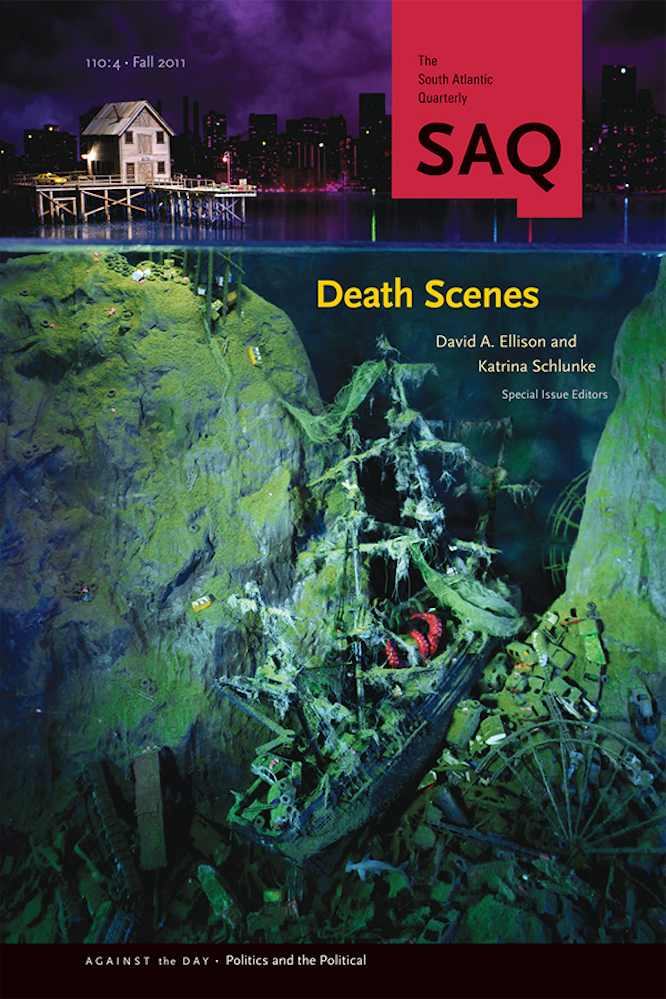 This number of South Atlantic Quarterly has a theme that more consistently emphasizes “death” than “scenes.” Two of the articles are actually concerned with perinatal death, which is in many ways problematically scene-less. The issues in these two studies are impressively difficult, and induced in me a sort of socio-moral vertigo. The Margaret Gibson paper “Real-Life Death” tackles the journal theme most squarely, addressing the influences exchanged between virtual representations and actual instances of death in contemporary culture.

Many of the papers are critical studies of literature or other art that I haven’t myself read or seen, and these were largely unable to give me value in their own right or even motivate me toward my own exploration of their subjects — with the possible exception of Katrina Schlunke’s piece on the film Waltz with Bashir. The artwork reproduced on the cover of the volume, “Bounty” by Lori Nix, is fascinating: it is a photograph of a sophisticated diorama in which a sunken ship and other debris are visible in a chasm beneath the water in a semi-submerged perspective directed toward a city shoreline. (Further exploration of her work online reveals other wonders including the awesome 2007 piece Library.

The supplementary “Against the Day” section of this number is about the distinction between “politics” and “the political” (la politique and le politique in French theory). The individual papers are diverse and all quite interesting. I wonder if Oliver Marchart’s philosophical advocacy of “minimal politics” isn’t getting an empirical drubbing from the Arab Spring and American Autumn of this year. Barnor Hesse’s study of the tacit but tenacious racialization of “the political” is perceptive and worthwhile. The short “Politics Surrounded” by Fred Moten and Stefano Harney is so overflowing with impressive wordplay that the authors’ actual thesis was opaque to me. And finally, I appreciated the explorations in Sandro Medrazza’s “Beyond the State, beyond the Desert,” but I was embarrassed for him that he traced the rhetorical landmark of “the desert of the real” only to its use by Slavoj Žižek, without realizing or noting that Žižek was quoting an adage by Jean Baudrillard.