The Society of the Spectacle

The Society of the Spectacle by Guy Debord, newly translated and annotated by Ken Knabb, is due March, 2014. You can check out the text of this online at the Bureau of Public Secrets, and pre-order the print edition via AK Press. 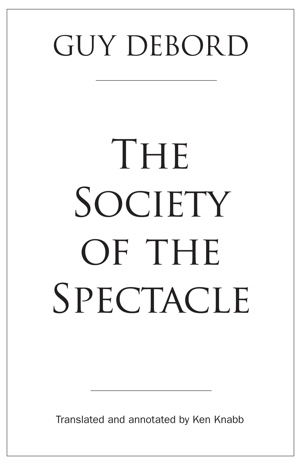 The Society of the Spectacle, originally published in Paris in 1967, has been translated into more than twenty other languages and is arguably the most important radical book of the twentieth century. This is the first edition in any language to include extensive annotations, clarifying the historical allusions and revealing the sources of Debord’s ‘détournements.’

Contrary to popular misconceptions, Debord’s book is neither an ivory tower ‘philosophical’ discourse nor a mere expression of ‘protest.’ It is a carefully considered effort to clarify the most fundamental tendencies and contradictions of the society in which we find ourselves. This makes it more of a challenge, but it is also why it remains so pertinent nearly half a century after its original publication while countless other social theories and intellectual fads have come and gone.

It has, in fact, become even more pertinent than ever, because the spectacle has become more all-pervading than ever — to the point that it is almost universally taken for granted. Most people today have scarcely any awareness of pre-spectacle history, let alone of anti-spectacle possibilities. As Debord noted in his follow-up work, Comments on the Society of the Spectacle (1988), ‘spectacular domination has succeeded in raising an entire generation molded to its laws.’ [via]

Ken Knabb has posted a new essay “The Situationists and the Occupation Movements” over at The Bureau of Public Secrets. If you’ve been following my posts about the attention that the Hakim Bey and Ontological Anarchy section and specifically T. A. Z.: The Temporary Autonomous Zone, Ontological Anarchy, Poetic Terrorism have been getting, this is an essay that may also be of interest. In a previous post, I pointed out that the Situationists should also be considered as a resource and an inspiration for the Occupy movement, not just, to extend that a bit, for Parkour and Dark City; and, here’s a great essay that speaks to that very connection.

“One of the most notable characteristics of the “Occupy” movement is that it is just what it claims to be: leaderless and antihierarchical. Certain people have of course played significant roles in laying the groundwork for Occupy Wall Street and the other occupations, and others may have ended up playing significant roles in dealing with various tasks in committees or in coming up with ideas that are good enough to be adopted by the assemblies. But as far as I can tell, none of these people have claimed that such slightly disproportionate contributions mean that they should have any greater say than anyone else. Certain famous people have rallied to the movement and some of them have been invited to speak to the assemblies, but they have generally been quite aware that the participants are in charge and that nobody is telling them what to do.

This puts the media in an awkward and unaccustomed position. They are used to relating with leaders. Since they have not been able to find any, they are forced to look a little deeper, to investigate for themselves and see if they can discover who or what may be behind all this. Since the initial concept and publicity for Occupy Wall Street came from the Canadian group and magazine Adbusters, the following passage from an interview with Adbusters editor and co-founder Kalle Lasn (Salon.com, October 4) has been widely noticed:

We are not just inspired by what happened in the Arab Spring recently, we are students of the Situationist movement. Those are the people who gave birth to what many people think was the first global revolution back in 1968 when some uprisings in Paris suddenly inspired uprisings all over the world. All of a sudden universities and cities were exploding. This was done by a small group of people, the Situationists, who were like the philosophical backbone of the movement. One of the key guys was Guy Debord, who wrote The Society of the Spectacle. The idea is that if you have a very powerful meme — a very powerful idea — and the moment is ripe, then that is enough to ignite a revolution. This is the background that we come out of.

Lasn’s description is a rather over-simplified version of what the situationists were about, but the Adbusters at least have the merit of adopting or adapting some of the situationist methods for active subversive use (which is of course what those methods were designed for), in contrast to those who relate to the situationists as passive spectators.”

I encourage you to check out the rest of that essay.

Recently in “Hakim Bey and the Occupy Wall Street movement” I linked to Ken Knabb’s Bureau of Public Secrets, and thought you might be interested in a new essay by Ken Knabb about the Occupy movement: “The Awakening in America“.

“The ruling elite don’t know what’s hit them and have suddenly been thrown on the defensive, while the clueless media pundits try to dismiss the movement for failing to articulate a coherent program or list of demands. The participants have of course expressed numerous grievances, grievances that are obvious enough to anyone who has been paying attention to what’s been going on in the world. But they have wisely avoided limiting themselves to a single demand, or even just a few demands, because it has become increasingly clear that every aspect of the system is problematic and that all the problems are interrelated. Instead, recognizing that popular participation is itself an essential part of any real solution, they have come up with a disarmingly simple yet eminently subversive proposal, urging the people of the world to ‘Exercise your right to peaceably assemble; occupy public space; create a process to address the problems we face, and generate solutions accessible to everyone. . . . Join us and make your voices heard!'”