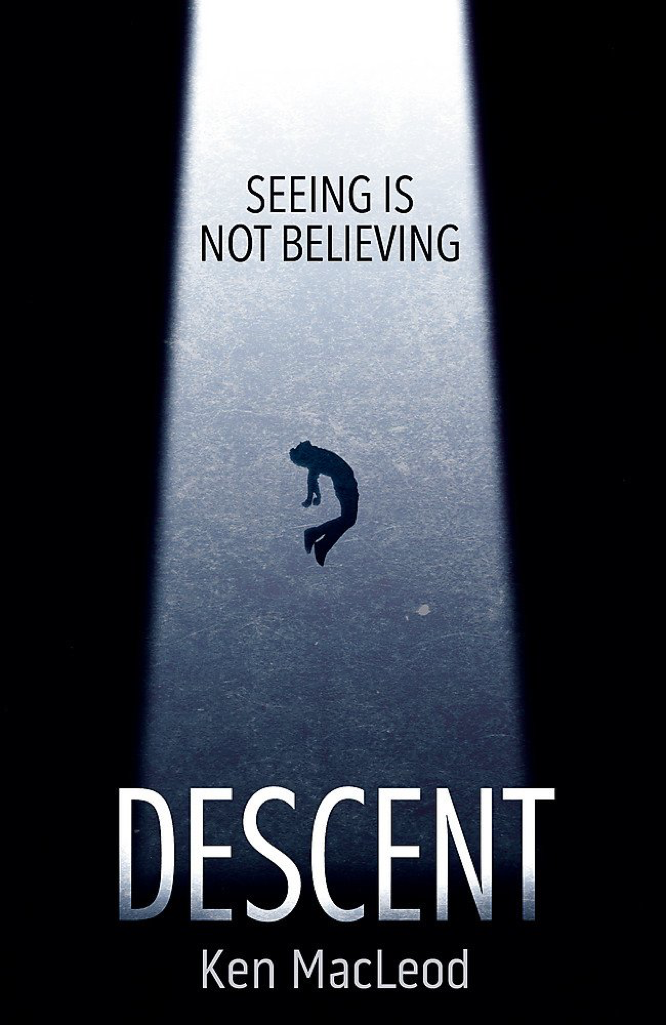 In this novel, MacLeod again presents two linked narratives in different times. In this case, the one in the farther future is told by a historian, and it soon appears that the earlier story is the history that he is attempting to research and write. But tension is maintained for the reader by the fact that with each of these proceeding by their own internal chronology, what the characters in the twenty-first-century story don’t know seems to be exactly what goes without saying in the later period, when everyone knows it and takes it for granted. It’s a clever and effective structure. I think this is also the most Scottish of the four “Fall Revolutions” books.

In notes referred to the author, it is alleged that this final book of the series takes place in a continuity divergent from the second and third, because of an event in the second book that is somehow inconsistent with The Sky Road. I can’t figure it. Portions of The Stone Canal (the second book) take place both before and after the far-future narrative setting of The Sky Road. I see them all integrating well enough, though; there are explicit links to all three of the other books here, and at least cameo appearances of their principal characters.

Although The Sky Road was written and published last, its far-future portions serve to bridge narrative gaps between the other books, particularly helping to account for how the anarcho-socialist Earth society of The Cassini Division (the third book) came into existence. Now having read all four books in publication sequence, I think they could be equally enjoyed in any order whatsoever. In many ways, the plot of Ken MacLeod’s third “Fall Revolution” novel is like that of a Star Wars movie: it features a protagonist with a painful family history seeking out and recruiting a necessary sage, a further “side quest” that turns out to be integral to the resolution of the main challenge, and a climactic space battle. Even the fact that the main character is a black woman doesn’t much distinguish it from the latter-day Star Wars pictures, with their increasingly diverse central cast. What really sets it apart is a genuinely speculative sensibility, as contrasted with the reactionary space fantasy of the Forced films. Replacing the Rebel Alliance with a Cassini Division who protect the anarcho-socialist Solar Union against a post-human presence on Jupiter makes for a very different story. MacLeod’s socialist heroes subscribe to what they call “the true knowledge,” which is identified–by a “non-cooperative” character who doesn’t accept it–with Aleister Crowley’s Law of Thelema (albeit with surplus capitalization, 86).

Nor has MacLeod abandoned the complementary anarcho-capitalist setting he has developed on New Mars, at the far side of the wormhole gate created by the ancestors of the Jovians. The theme of disputes over personhood for post-human individuals is carried forward in this book, but where it centered on the notion of slavery in The Stone Canal, it is tied more directly to the issue of genocide in The Cassini Division (as in the first book of the series, The Star Fraction). This book is clearly part of the vanguard of a species of post-cyberpunk space opera for which MacLeod is one of the best representatives.

The chief protagonist is Ellen May Ngewthu, and she is the first-person narrator throughout the book. Ellen is an interesting character, and not a profoundly reliable narrator. McLeod does not offer a documentary rationale for her role as the book’s speaker as he has for points-of-view in other novels. It’s just a narrative convention, and part of the fast-reading package. Despite the surfeit of new ideas in this book, they build cleanly on the previous volumes, and I read the whole thing with pleasure in a little over two days. I took a year’s breather between reading Ken MacLeod’s first novel The Star Fraction and this sequel The Stone Canal. In this one, he was already experimenting with many of the techniques that I enjoyed in his later Engines of Light series: changes of narrative person, parallel plot-lines that turn out to be nested, and multiple centuries of setting. It covers a time-frame both preceding and succeeding the one in the previous volume, and is definitely in a shared narrative continuum, with at least one point of explicit character contact, as well as many shared events in what was then (when it was written in the 1990s) a conjectural near future. At the same time, I think this volume would make a fine starting point, and that readers could really appreciate it fully without having read the first book.

Politically, the book’s protagonist is raised by splinter-schismatic ultra-leftists, enters adulthood as an anarchist, and develops more socialist sentiments late in the course of events. The villain–a far more sympathetic one than in the previous book, but still quite detestable–goes from disillusioned socialist to the figure presiding over an extra-terrestrial “anarchy” in a most revoltingly capitalist manner.

Like The Star Fraction (and Engines of Light, for that matter), The Stone Canal is very much animated by the author’s political concerns. To these is added a level of more science-fictional politics concerning the ontological status and social rights of post-human (“artificial”) intelligences. In this respect, and with its attention to the dilemmas surrounding nanotechnologically-driven resurrection of the dead, this book reminded me more than a little of Ian MacDonald’s Necroville, which had been published the year before. At the same time, it also covers a lot of the ground of space exploration and singularity exploitation that would later be treated in Charles Stross’ Accelerando.

I don’t think I’ll pause as long this time before tackling the next book in the series, The Cassini Division. Having read a number of Ken MacLeod’s more recent books, I’ve now gone back to his first novel The Star Fraction. Although the emergence of praeterhuman artificial intelligence is key to the plot, the book is far more focused on the political than the technological, and the few retrospective technological clinkers (typical of the cyberpunk of the late 20th century) in no way dampen the political imagination and its relevance to readers more than twenty years after its original publication.

The chief characters of the book are a “security mercenary” and a research scientist, and the setting is a balkanized England of “micro-states” subject to the US/UN after a Third World War of the 2020s. The story is fast-paced, with intrigue predominant over still-present sex and violence, but a prior appreciation of 20th-century revolutionary and imperialist projects is important for the reader’s understanding. The villains are a little overdrawn in a way that sometimes verges on the comic, but they are often as absorbing as the protagonists.

This book is tagged as the first in “The Fall Revolution,” a set of novels in a shared history, with varying timelines. It falls just a bit short of the work of MacLeod’s I read in the “Engines of Light” series, or the standalone Newton’s Wake, but it’s still very good, and I’m sure I’ll go on to read others in the sequence. [via]