Hermetic Library fellow T Polyphilus reviews Rose Croix: A History of the Ancient and Accepted Rite for England and Wales by A C F Jackson: 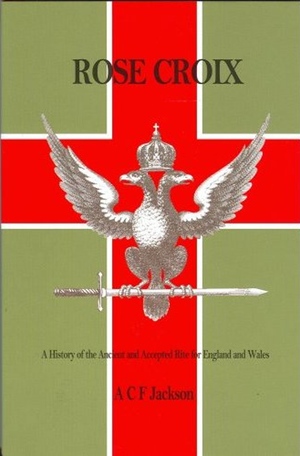 This history entails a dramatic shift in perspective for readers who have already gained some familiarity with the Ancient and Accepted “Scottish” Rite in the United States. The A&A Rite, as it is denominated by its Supreme Council for England and Wales, is an expressly Christian system of grades, as contrasted with its ecumenically theistic progenitor twice-removed, the Charleston Supreme Council for the southern United States. The English system is predominantly focused on the 18th degree Rose-Croix of Heredom, hence the book’s title. The 18th degree is in fact, the only degree worked in full ritual form by the chapters of the Rite in England and Wales. The 30th degree Knight Kadosh is worked by the Supreme Council only for candidates who have served as the Most Wise Sovereigns of their Chapters, and the 31st and 32nd are further dignities conferred by the Supreme Council of the 33rd.

The volume includes highly detailed research on the early development of the Rose-Croix and Eccosais high degrees in France and the western hemisphere, with an impressive effort to sort out the facts from the mythopoeia of early organizers. Frederick the Great is discounted from having played any actual role in the development of the Rite, with convincing justification. On another point of important originary myth for the Rite, the author notes that the chapter of Clermont “is now known to have been mythical,” but he frustratingly fails to provide how that might be known, by means of specific data or even by reference to another historical text.

The appendices of Jackson’s book contain very useful transcripts of historical MSS, including the Patent to Etienne Morin 1761, and the 1762 and 1786 Constitutions of the Rite. The book is also rife with high-quality black and white illustrations of historical initiates, regalia, and documents. [via]