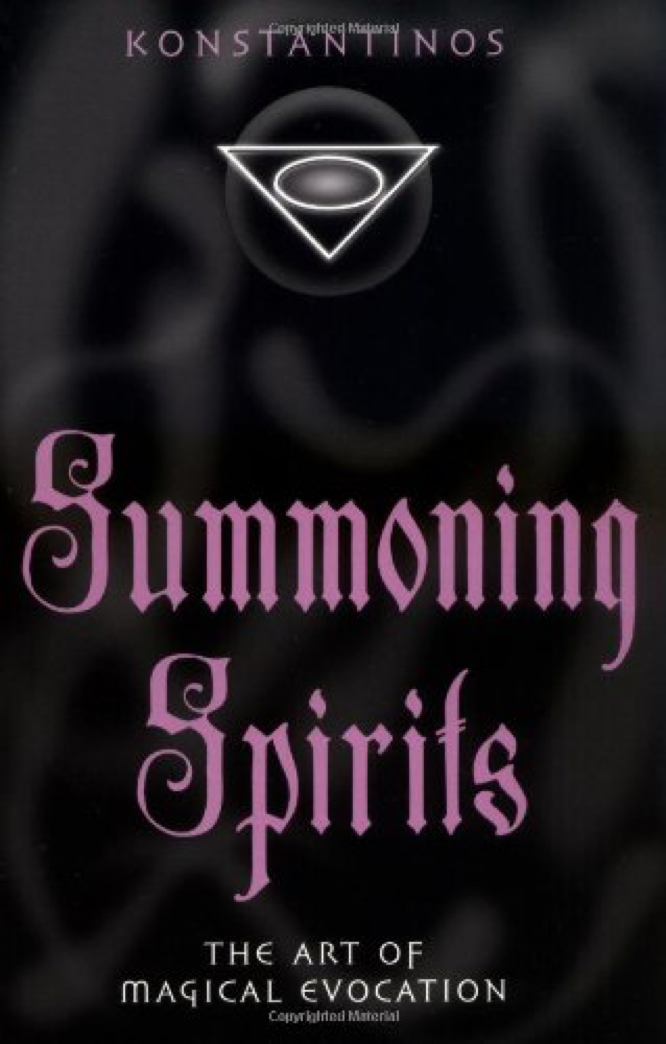 Until modern times, the standard image of the magician in the Western world was largely that of a summoner of spirits, and the elements of that image — the ancient books of conjurations, the circle drawn in chalk and fortified with mighty names, the wand raised as a shadowy figure takes shape in clouds of incense smoke — still play an important part both in fantasy fiction (the folk mythology of the modern magical revival) and in the broader cultural conception of what a magician is or can be. The actual practice of evocation, however, has suffered a certain amount of neglect in the magical community.

Summoning Spirits may just change that fact. Designed as an introduction to evocatory magic for the complete beginner, it presents a complete and relatively simple system of evocation which is likely to appeal to many modern magicians.

Readers with a solid background in modern magical literature will find it easy to identify Konstantinos’ sources — primarily the Golden Dawn system, Donald Michael Kraig and Franz Bardon, although the Goetia and other classical grimoires also have a place. At the same time, he presents this material with a good deal of clarity and intelligence, and he makes good use of his own experiences with the techniques he describes. Of particular interest is a chapter describing fifty entities to be summoned, complete with eleven portraits by artist Lisa Hunt.

There are a few awkward points to Summoning Spirits. The author’s prose style is sometimes uncomfortably close to the gosh-wow school of fantasy writing — he is, notably, a little too fond of the word “amazing” — and his discussion of magical theory skirts many of the deeper issues. In several places, he brushes aside differing points of view with some very shaky arguments. (For example, he dismisses the entire school of thought that sees spirits as psychological entities as the work of armchair theorists; in point of historical fact, this simply isn’t true.)

Still, Summoning Spirits is a useful contribution to the literature on an important branch of magical practice. Beginning and intermediate practitioners who are interested in taking up evocation, and scholars who wish to keep track of the present state of the magical art, are likely to find it of considerable interest.

Julianus reviews Summoning Spirits: the Art of Magickal Evocation by Konstantinos in the Bkwyrm archive. 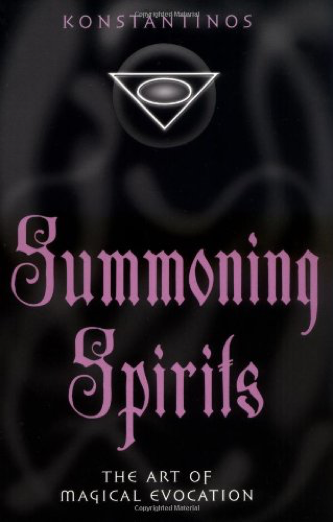 It is high time someone came out with a specialised handbook to this important branch of Magick, and this is a fair initial entry. It has the handicap of the usual patented Llewellyn “Magick 001” tone which I can barely stomach anymore. There is also the obligatory “It’s-all-perfectly-safe-and-easy-and-it’s-certainly-not-Satanic-at-all-nope-nope-nope” chapter whose presence I have never understood, since I presume the reader already knows this or he would never have picked up the book in the first place! The book itself is a pretty complete overview of the subject, in fact it is practically self-contained, and I am rather uncomfortable with the idea of divorcing an advanced practice such as Evocation from a fully-rounded Magical curriculum as Konstantinos does. He also places far too little emphasis on banishing and purification, telling the reader to rely on “Divine Providence” or some such goop– and people say Crowley lays booby-traps for the unwary! The author’s research is pretty good, and he thankfully avoids the old “these-spirits-are-really-just-parts-of-your-own-subconscious” cliche. So this is a promising start for a guy who’s just 23– I wouldn’t want to read anything I would have written at that age!– and I’ll look forward to seeing really decent stuff as he matures.