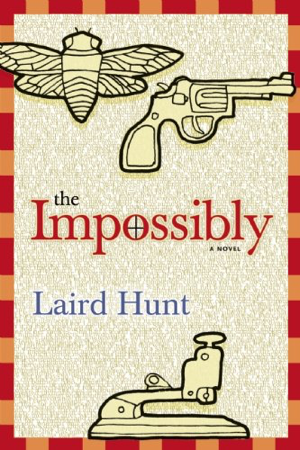 The Impossibly by Laird Hunt was originally published ten years ago by Coffee House Press. It has recently been re-released in a nifty trade paperback edition, and this edition is the one I will be reviewing. After reading the book I e-mailed the author with a question and found out that sections of the book had been reshuffled. Well written, non-linear fiction like this can stand the test of a re-shuffle! The book begins (at least this time) with a discussion between the unnamed main character and his girlfriend over the word and the thing known as a stapler. Obsessions with words, and the various things they represent, flow through the narrative, reminiscent of J.G. Ballard’s Crash, in which the main characters obsess about all things surrounding car wrecks, especially those crashes involving the death of certain iconic celebrities. But in The Impossibly, there is not so clear a focus, in fact, there is a lot that remains obscure throughout, for example, is this guy working for the mafia? Is he a spy? Is he spying on himself? There is peripheral action, and interesting set ups galore that evoke dark, nefarious deeds in which the man participates. But it is not always clear what is happening, and to whom it is happening. Does he have a head injury? He sure gets hit on the head a lot. I wrote to the author not because I required explanations, rather, just the opposite. Seduced by the oblique way in which the story is presented, I craved more loose ends! The reader becomes won over by the unrelenting obfuscation of the narrative and rests comfortably inside its abundant charm. The Impossibly is a compelling read, Mr. Hunt is a gifted writer, but if you like to be led along a plot in the usual way, prepare to be pulled feet-first through a dark literary noir tunnel. [via]