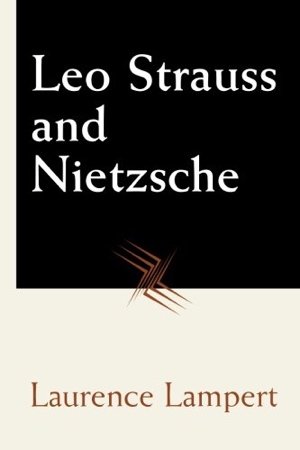 Leo Strauss is aptly characterized in this volume as an “elusive master of other men’s elusiveness” (130). Although he was vocal in his opposition to the philosophy of Friedrich Nietzsche, the author of Persecution and the Art of Writing cannot be expected to have really held all of the opinions he professed, particularly when those opinions a) accord with popular prejudice, and b) are unaccompanied by a conclusive argument. Louis Lampert is able to go further, and reverse Strauss’ public opinion by pointing to his private declaration in correspondence:

“Nietzsche so dominated and charmed me between my 22nd and 30th years that I literally believed everything I understood of him.” (5)

Lampert also adverts to one of Strauss’ final writings, a dense but ultimately sympathetic presentation of Nietzsche in “Note on the Plan of Nietzsche’s Beyond Good and Evil.” This essay, originally published in the posthumous Studies in Platonic Political Philosophy, is reproduced as an appendix to Leo Strauss and Nietzsche, and the second and longest of the chapters in Lampert’s book is an extremely thorough and conscientious exegesis of it.

This volume demonstrates abundantly that both Nietzsche and Strauss (and, I suppose, Lampert) viewed Nietzsche as Plato’s peer. In the third chapter, Lampert sums up Strauss’ actual view on Nietzsche’s role in the history of philosophy, insisting that Nietzsche “platonizes”—in the esoteric sense understood by Strauss as implementing a strategy to ensure the subordination of religion by philosophy. In the fourth chapter, Lampert foregrounds Strauss’ own contributions to philosophy, what Strauss found most valuable in Plato, and how Strauss and Nietzsche differed in their reactions to Plato.

Lampert’s final chapter is called “The Nietzschean Enlightenment,” and in it he seeks to judge between Nietzsche and Strauss, “Who reads the needs of our age with greater acuteness?” (168) His answer is clear: Nietzsche. And the Nietzsche presented here by Lampert is one which I find wonderfully credible and sympathetic.

This book was a good read for its own sake, but as much as I enjoyed its contents, I may have even had more to appreciate in the way that Lampert and Strauss sent me back to read anew in Beyond Good and Evil, to my repeated profit. [via]