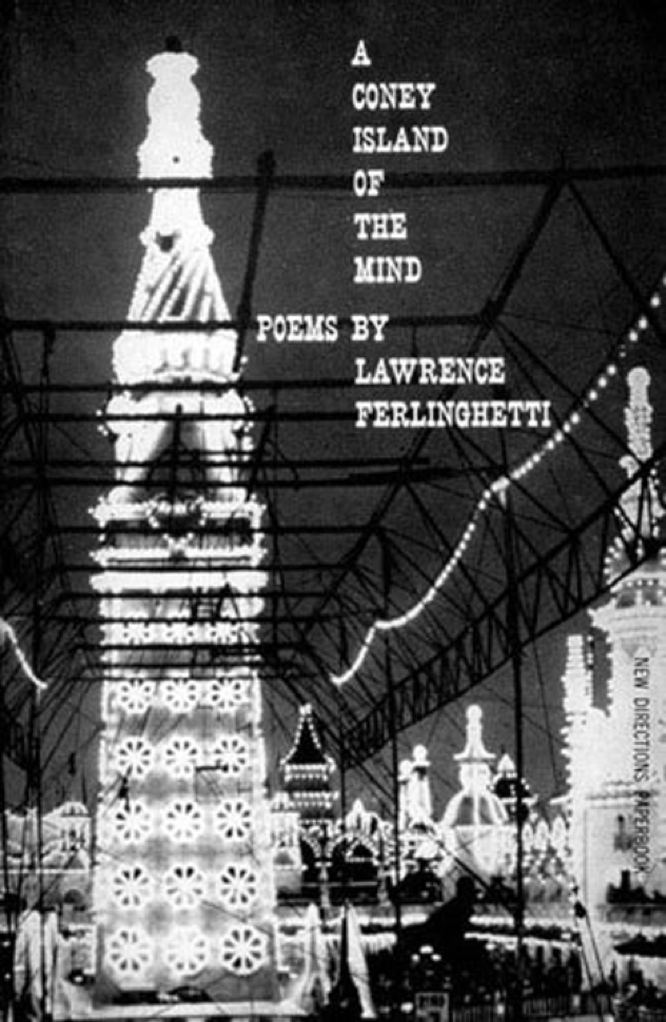 This 1950s poetry collection is the most famous writing by Ferlinghetti, who was also lauded as an activist, publisher, bookseller, and painter. It has three principal sections: the title piece, “Oral Messages,” and poems from “Pictures of the Gone World.”

The title of the book and its first section was taken “out of context” from Henry Miller’s Into the Night Life. Ferlinghetti said that it was to describe the carnivalesque aspect of his own subjective experience in composing the poems. But a different and credible reading is to see the US society that the poet engages in his verse as a mental amusement park: corralling minds into circuitous rides that exhilarate, games that impoverish, and technology that dazzles and mystifies. Still, the weight of these poems often rests not in social criticism but in aesthetic contemplation, libidinal impulse, epistemic anxiety, and similar dilemmas.

The second section of the book is “Oral Messages,” seven longer poems composed for recitation with “jazz accompaniment” (48), and to incorporate experimentation and spontaneity. Although this mode is a paragon of Beat Generation performance, and Ferlinghetti did publish prominent Beat authors, he rejected the “Beat” label for his own work. My favorite of these poems is “Junkman’s Obbligato,” which urges downward economic mobility in order to champion life and freedom. But a close second is the diffident brag of “Autobiography” (“I am the man. / I was there. / I suffered / somewhat.”) succumbing irregularly to atypical end rhyme.

The final thirteen poems are selected from a volume “Pictures of the Gone World” that Ferlinghetti had written just three years previously. These are similar to some of those in the first section (briefer, and like them individually numbered rather than titled), and they tend toward a narrower and more intimate sensibility–even though the eleventh has the great wide scope of the world as the place for life and death.

Ferlinghetti offers some unflinching anti-Christian blasphemy in the fifth “Coney Island” poem (15-6), but the “Oral Messages” seem to exhibit sincere apocalyptic anticipation (“I Am Waiting”) and a hope of obscure divine palingenesis (“Christ Climbed Down”).

Despite Ferlinghetti’s use of popular culture and accessible idiom, his texts are still in dialog with the canons of elite art and literature. The first poem of the book orients to the painting of Goya to reflect on “maimed citizens in painted cars” (10), and the second one alludes to Homer’s Odyssey to indict “American demi-Democracy” (12). Later verses cite Hieronymus Bosch, Morris Graves, Franz Kafka, Dante, Chagall, Proust, and others. The poet fulminates against the enclosure of culture by experts and institutions in poem 9 of “Pictures of the Gone World,” but he had an M.A. in English literature and a Ph.D. in comparative literature, and the consequences of this training are everywhere visible in his poems.

Twenty-first century readers may occasionally struggle with a dated allusion or two in these pages (nothing too arcane for a ‘net search to remedy, though). Ironically, it is the “popular” and contemporary references from the 1950s that are more likely to have passed into obscurity. On the whole, the verses have aged well and still have a sense of immediacy sixty-four years later.