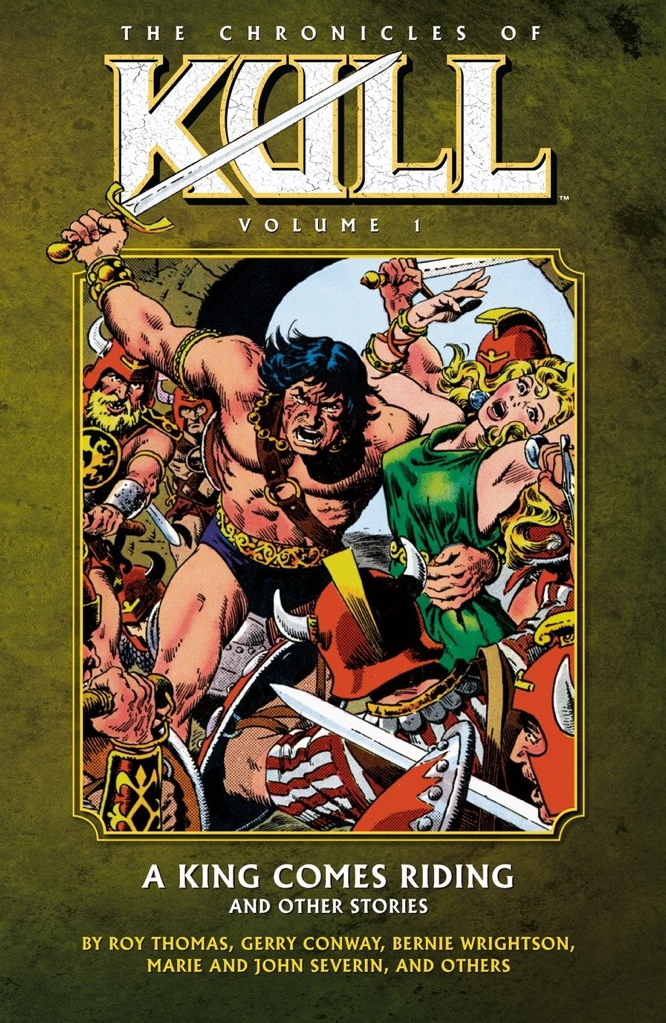 Kull is king of Valusia in the pre-Hyborian age of the far antiquity of Howard’s imagination. In these stories (some of them based on REH originals), he is continually subjected to court intrigues, sorcerous impersonations, assassination attempts, and the like. The narrative tone is dark, verging on paranoid.

The art, meanwhile, though often providing moments of violence, tends toward light. Marie Severin’s four-color treatments would look better on old-fashioned newsprint, but they come out jarringly bright on the glossy white stock of this reprint volume. The visual design of Valusia is not so exotic (as Mark Finn points out in the foreword). Instead, it has a decidedly medieval European look, crossing the blood-and-guts REH concept with something of the style of Prince Valiant. Kull’s costuming varies quite a bit; he often runs about in what appears to be little more than briefs, owing perhaps to his barbarian origins.

While most of the inhabitants of his kingdom seem to be unreliable if not inimical, Kull’s best pal — the only other character for whom he shows actual affection, in fact — is Brule, who is a Pict and thus a hereditary enemy of the Atlantean savage Kull, though he plays the Robin to King Kull’s Batman. Not only does the lead character show a surprising shortage of libido (if we discount lust for battle), there aren’t many women in evidence in these stories at all. The few who do appear are inevitably high-born, and serving as pawns in a larger game.

On the whole, these pieces from the first heyday of sword and sorcery color comics aren’t awful, but they do show their age.