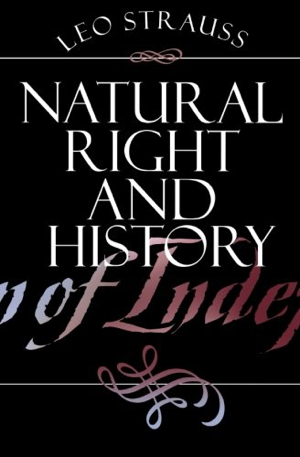 This book was developed out of a set of lectures given by Leo Strauss at the University of Chicago in 1949. It still has the character of three texts in six chapters, more than a monograph, although they share a common subject matter and are set in a reasonable sequence.

A strange feature of the edition that I read is the cover design, which incorporates as background the title of the American Declaration of Independence. Although the idea of “natural right” may be wedded in American imagination to “truths” that “we hold … to be self-evident,” Strauss at no point references that document, or Thomas Jefferson, or US history at all. The Declaration of Independence is no more relevant to Strauss’ discussion here than is Liber LXXVII vel Oz, and it was more out of engagement with the latter that I undertook to read this book.

Strauss is notorious as an intellectual mentor for some of the senior figures in the neoconservative faction of American politics, and I realized while reading this book that he may be ultimately to blame for the neocons’ popularization of the term “regime (change),” inasmuch as he very carefully and conspicuously chooses “regime” to translate politeia as it appears in classical texts (136f.). However, the neocon usage signifies a particular government considered as individuals and the institutions they dominate, e.g. “the Netanyahu regime.” This meaning is not in keeping with the larger sense of politeia as the socio-political integrity of a society. Strauss also observes that the traditional concept of “regime” has been superseded in modernity by the less coherent idea of a “civilization” (138).

Neocons’ reading of Strauss is likely to have found some gratification in his treatment of Edmund Burke, the last of four figures surveyed here in the development of “modern natural right.” Burke, now viewed as a philosophical founder of Anglo-American conservatism, gets some applause from Strauss for his valuing of practice over theory, and his recovery of a measure of the Ciceronian concept of political virtue. Even so, he is still shown as a sort of “last gasp” of such a sensibility, and his acceptance of individualism as a political principle places him on the same path of descent as the wider intellectual culture (323).

Throughout the book, and especially in its opening chapters, Strauss can be seen taking a stand (both with and against Nietzsche, see p. 26) in opposition to the sort of “historicism” that thoroughly relativizes political values, and thus dismisses the concept of natural right. He takes for a proponent and representative of the historicist school the sociologist Max Weber. I was fascinated in passing at a number of quotes from Weber, such as “Become what thou art” (44ff.), that seem highly Nietzschean, if not even Thelemic.

Strauss composed Natural Right and History (1953) at around the same time as Persecution and the Art of Writing (1952), and the method of a hermeneutic of esoteric writing, as understood by Strauss, is on display here. For example, in discussing Locke, the first of his four modern figures, Strauss remarks, “The fact that he is generally known as a cautious writer shows that his caution is obtrusive, and therefore perhaps not what is ordinarily understood as caution” (206). A more overt and detailed application of the method of esoteric reading is given in a long footnote discussing the possibility of Hobbes’ atheism, where Strauss observes, “Many present-day scholars … do not seem to have a sufficient notion of the degree of circumspection or of accommodation to the accepted views that was required, in former ages, of ‘deviationists,’ if they wished to die in peace” (198-199n.).

Glossing Plato and classical thinkers generally, Strauss tells us, “Philosophizing means, then, to ascend from public dogma to essentially private knowledge” (12). [via]

Hermetic Library fellow T Polyphilus reviews Persecution and the Art of Writing by Leo Strauss, from University of Chicago Press. 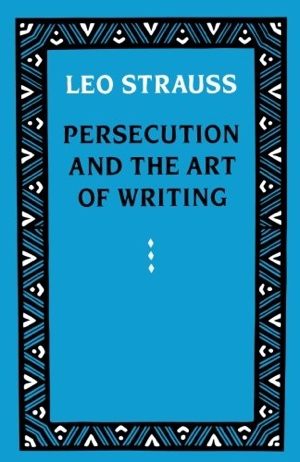 I have lost count of the number of good scholarly books I’ve read which have offered praise (or at least positive citation) of Persecution and the Art of Writing. It was on my list of books to read for about five years, which is impressive in itself, and even more peculiar in light of the fact that it’s only about 200 pages long.

Although well and carefully written, Persecution and the Art of Writing is no easy read. The larger part of the volume is taken up with case studies from the writings of Maimonides, Halevi, and Spinoza, and readers unfamiliar with the the medieval and early modern Jewish intellectual traditions will benefit from reading a good encyclopedia article on each before approaching their respective treatments by Strauss, who assumes an informed, even elite reader for his exploration of the hermeneutical methods to be used with these writers.

Strauss proposes that prior to the liberal regimes of modernity, the greatest and most careful philosophers necessarily wrote in an apparently incoherent fashion, so that their true conclusions could remain “between the lines,” cloaked by statements of permissible but dissimulating opinion. His notion of the “exoteric text” is one that is not merely accessible to the vulgar public—those whom Maimonides called “people of the earth”—but which conceals heterodox lures for “potential philosophers” under the cover of more conventional positions.

The admiration of certain Neoconservative pundits for Strauss has contributed to a posthumous view of him as a political reactionary favoring domination by rulers who deceive the populace. My own reading of Persecution and the Art of Writing does not support this claim; Strauss consistently represents his dissembling philosophers as seeking to perpetuate their ideas in the face of bigoted tradition. But given his insistence on the method of textual ambiguity, and the justification of answering fools according to their folly, my confidence in having interpreted his genuine thoughts is far from full. [via]