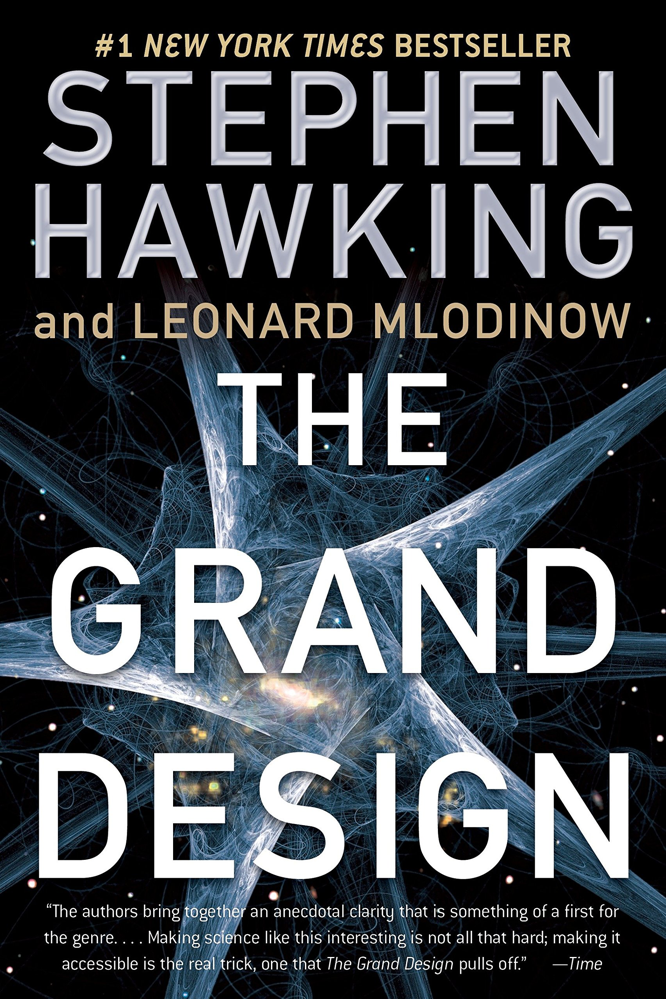 The Grand Design is certainly designed to appeal to a wide market: the authors assume no knowledge of history or physics on the part of their readers. If you know what a photon is (70), or that Democritus proposed the atom (21), then you’re already a little ahead of the game that they offer. But writing at such a primer level entails great responsibility to be both engaging and accurate. As for being engaging, the book is full of what my Other Reader called lame professor jokes, the sort that aren’t really about the subject at hand and aren’t very funny, but seem intended to demonstrate that a presenter of essentially dry material actually has a sense of humor.

The press junket for The Grand Design has tended to play up its potential for conflict with religious world-views. Strangely, though, the text actually picks a fight with philosophers. In their opening page, Hawking and Mlodinow proclaim, “philosophy is dead. Philosophy has not kept up with modern developments in science, particularly physics.” But what the authors think of as “science, particularly physics” is still what used to be called natural philosophy, for very good reason. Hawking and Mlodinow are really taking the traditional philosophical side–as opposed to the theological side–in the debate about how questions about natural origins should be answered. There’s no question that Hawking and Mlodinow know their physics, but they evidently don’t know religion or modern theoretical philosophy, and their attempts to pass judgment on those fields are unimpressive. For instance, in what is mostly a capable dash through the history of science, they remark that “at the time the Bible was written people believed the earth was flat.” But “the time the Bible was written” was roughly a millennium that coincided with some of the developments in Greek cosmology discussed by Hawking and Mlodinow. It’s likely that some biblical authors thought the earth was flat; but for most, we don’t even know.

Read charitably, the central thesis announced at the outset of The Grand Design is that physics has made metaphysics obsolete. And certainly modern physics has made many earlier metaphysical solutions obsolete. It may even have substantially transformed some questions—particularly the ones about cosmic origins at stake in the later parts of this book. But it’s not true that the natural sciences have answered all or even most metaphysical queries. And if metaphysics as a whole is a wrong turn—as it may in fact be—then that needs to be concluded on the basis of a greater understanding of the history and contents of philosophy than Hawking and Mlodinow have on display.

At its close, the book is underwhelming. We are told that M-Theory is the only current candidate for a comprehensive theory of physical forces, and this theory implies a narrative of cosmic origins. But M-Theory hasn’t been empirically verified. So what is evidently supposed to be a sweeping declaration in the final paragraph has to be stated in the subjunctive. That’s not my kind of “great perhaps.”