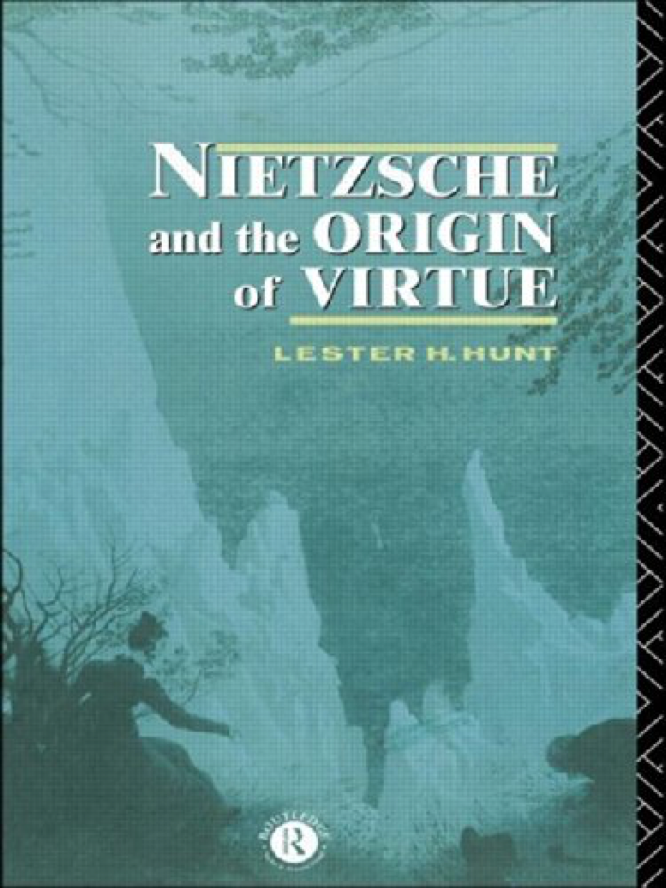 Although he doesn’t quite admit it, Lester H. Hunt’s work in this volume consists of a set of “good-faith straw men,” if we can allow for the possibility of such a thing. Throughout the book he abstracts Nietzsche’s “arguments” from disparate assertions and injunctions, but works to give Nietzsche the benefit of the doubt in terms of what must be inferred. In many cases, the results are perceptive and interesting, and the subtopics of Nietzsche’s vitalism, anti-statism, experimentalism, perspectivism, etc. are framed usefully. I agree with Hunt that Nietzsche’s anti-morality is an opposition to establishment moralism (capital-M Morality, in Hunt’s usage) rather than to the existence of moralities, which are necessarily diverse under the conditions of Nietzschean perspectivism. I especially liked the well-founded observation that “Nietzsche’s ethical relativism amounts to … a moral polytheism” (134).

The Achilles’s heel of Hunt’s method in this book is exposed on page 100, where he writes of Nietzsche, “[F]or the sake of the cogency of his system he must at any rate be able to answer the argument …” (emphasis added). But this passage, so typical of Hunt and his approach to Nietzsche, plainly ignores the aphorism from “Arrows and Maxims” (in Twilight of the Idols): “I distrust all systematizers and avoid them. The will to a system is a lack of integrity.” Nietzsche was not building a system in either of what Hunt calls his “immoralist” and “legislating” modes (150). The existence of conflicts among Nietzsche’s ideas is a testament to their vitality. They derive from something other than the “will to a system,” which would reduce his work to a uniform medium from which stresses had been removed.

A key shortcoming among Hunt’s interpretations here is his tendency to pigeonhole the scope of any given idea (or posited “argument”) of Nietzsche’s as either individual-psychological or social-ethical, and in Hunt’s conclusions he focuses on the tension between the contents of the two categories. Nietzsche himself, however, insisted that “our body is but a social structure composed of many souls … What happens here is what happens in every well-constructed and happy commonwealth, namely, that the governing class identifies itself with the successes of the commonwealth” (Beyond Good & Evil §19), showing that this distinction imposed by Hunt is alien to Nietzsche’s approach to the questions involved. Just as Nietzsche discountenanced the received dichotomy of mind and body in the philosophical tradition, so too he rejected the “social” and “individual” as rigid categories, preferring to apply the evident mechanisms of one to the opaque operations of the other. So the tension that Hunt tries to demonstrate at a “systemic,” categorical level really resides at an atomic scale within the difficulty of Nietzsche’s thought.

I am sympathetic to much of what Hunt writes in this book, but with my misgivings about his method, I can hardly accept his conclusions. As always, I appreciate another voice encouraging me to grapple with Nietzsche’s texts. [via]