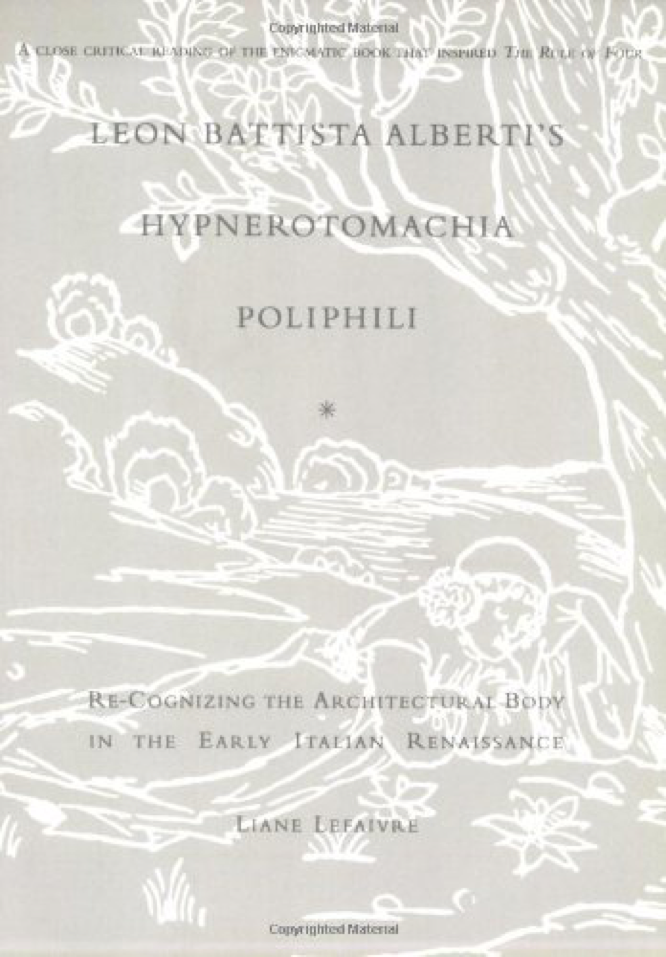 Liane Lefaivre’s 1997 book criticizes the traditional attribution of the Hypnerotomachia Poliphili to Fr. Francesco Colonna of Treviso, as well as the alternative ascription to Prince Francesco Colonna of Palestrina (97-109). Her skepticism regarding Colonna’s authorship rests primarily on what she presumes to be his intellectual incapacity. She points out that he was not ordained until age thirty, and that he didn’t receive his bachelor’s degree in theology for another decade afterwards. But certainly the Hypnerotomachia demonstrates that its author’s chief preoccupation was not Christian theology. His slow academic advancement might well have been a product of his distraction from the Dominican curriculum, which Lefaivre derides as “still in the medieval scholastic mode” (100), Nevertheless, some of the medieval scholastic techniques that Colonna would necessarily have acquired in his Dominican training are evident in the Hypnerotomachia.

As Lefaivre’s title indicates, Leon Battista Alberti’s Hypnerotomachia Poliphili champions authorship by the noted Florentine philosopher and architect. She came to this conclusion independently from Emanuela Kretzulesco-Quaranta (who has also offered it as a hypothesis), and Lefaivre’s book is a valuable study in various other respects, but I am unpersuaded regarding her Alberti thesis. The simplest and strongest point against Alberti’s authorship is internal to the text. Lefaivre points out repeatedly that Alberti was a virtually peerless engineer and architect of the quattrocento, and that he merited the title of geometra egregio (“distinguished geometer”) given to him by a patron (116, 120). Yet, pace Lefaivre, Poliphilo is not altogether professional when it comes to his architectural descriptions. Lefaivre notes one such instance herself, where the Doric and Corinthian orders of architecture are confused, only to unaccountably dismiss it as “an Albertian joke” (162). Another example is contained in the measurements of the great composite pyramid-obelisk. Joscelyn Godwin provides a discussion of these flawed numbers, as an example of the mathematical and architectural error that leads him to call Colonna a “very well-informed amateur of classical architecture.” He also observes that while the Hypnerotomachia author certainly must have studied and drawn terms and ideas from Alberti’s De re aedificatoria of 1450 (a point that is uniformly conceded by scholars), he often mixes Albertian and Vetruvian nomenclature for the same object. This practice is in marked contrast to Alberti’s agenda in De re aedificatoria, which, as Lefaivre states, “was to establish a clear terminology,” and to purge Greek vocabulary from the Latin treatment, substituting Latin neologisms as needed (36). Indeed, such a lexical approach could hardly contrast more strongly with the one in the Hypnerotomachia, with its superabundance of Greek neologisms prodigally mixed with Latin in a Tuscan broth.

Lefaivre also fails to situate the writing of the Hypnerotomachia convincingly in Alberti’s biography. She observes that it was longer than any of the writings attributed to Alberti, and spends the largest portion of her “biographical” discussion explaining how it would have been possible for Alberti to have lost the manuscript (178, 146-52). She points to the presence of “musical musings” in the book as distinctively “Albertian,” while having previously noted the role of music in the Dominican studies of Colonna (99, 155). Her observation that Poliphilo wears a cassock and skullcap in the woodcut illustrations may militate against the authorship of Prince Francesco, but it seems to support the monk Colonna at least as well as it does Alberti (in the latter’s uniform as a papal abbreviator). In fact, Poliphilo’s description of himself as being “like a crow among white doves” suggests the characteristic black habit of the medieval and Renaissance Dominicans. While Colonna’s biography implies that he may have earned a reputation for lustfulness or even philandering, Lefaivre admits that it is difficult to reconcile Poliphilo’s admiration of feminine forms and features with the “well-known misogyny” of Alberti (160).

Above and beyond the authorship dispute, Lefaivre is concerned to establish the Hypnerotomachia as the vehicle of a presciently modern perspective on architecture and sexuality. Her study explores its relationship to the culture of the Italian Renaissance and is a significant contribution to the understanding of Poliphilo’s adventures.

(This review is mostly excerpted from my thesis on the Hypnerotomachia Poliphili, “A Renaissance Seduction of Memory.”) [via]