“These days, The Comment is sometimes regarded as a bit of irony, or an anachronism, or an example of ‘reverse psychology,’ or even a joke. But Crowley took this statement quite seriously, even if not perfectly literally.” [via]

“There is nothing wrong with studying Crowley’s evolving commentaries and writings dealing with Liber AL, such is encouraged by The Comment and was clearly the intent. But we know from experience that group discussion, especially in official contexts within a hierarchical organization, inevitably evokes the dynamic of intellectual leaders and followers, and subtle pressures to conform. O.T.O. is full of what might be considered operative paradoxes, and this is a significant one. We believe that by actively working to discourage the creation of social contexts in which individuals are expected to state their personal views on Liber AL and its meaning, we preserve their freedom.” [via] 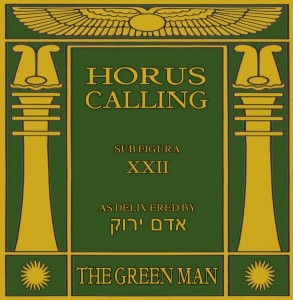 Frater Puck recently posted a picture of what appeared to be something he’d just received in the post. Apparently he just got sent something called Horus Calling which looked like some collectable pamphlet styled like one of Aleister Crowley’s technical libri. It turns out that it’s a copy of a CD by The Green Man.

Well, here’s a track by The Green Man called Liber Al which you might find interesting:

You may be interested in checking out a newly available PDF of an updated David Beth (author of Voudon Gnosis, past leader of Ordo Templi Orientis Antiqua & La Couleuvre Noire, and member of La Société Voudon Gnostique) essay “Aleister Crowley and the Dawn of Aiwass” which has a number of notes which reference Aleister Crowley’s Liber AL vel Legis sub figurâ CCXX as delivered by (LXXVIII) XCIII unto DCLXVI with a commentary by The Beast To Mega Therion 666.

The post about this essay over at LAShTAL notes that David Beth is making this available “[a]s a gift to the Thelemic community for their inspiration and their aid in research and ideas in the past” and that “David considers this one of his finest non-Voudon related writings and invites conversation and feedback on it.”