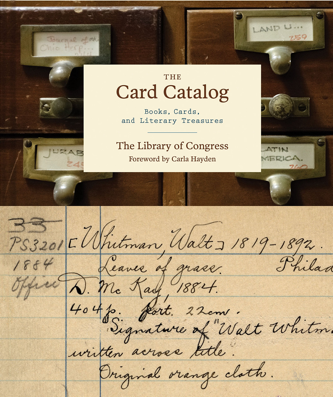 Well, here’s a book that made me feel old. Knowing that most people under the age of 30 have never used a card catalog makes me sad for some reason. It’s not the world’s most glamorous or sophisticated technology, but this book highlights its charm quite vividly. I was still using card catalogs at the Harry Ransom Humanities Research Center in Austin as recently as 1995, and I remember how thrilling it was to find their provenance catalog and the discoveries that led to. I catalog my own library with the online database of LibraryThing, although as a teenager I did build a card catalog to manage my then-growing considerable comic book collection.

This materially-beautiful volume The Card Catalog supplies a fairly full history of the Library of Congress itself (at least for its first century or so), in support of its more particular study of the library’s card catalog, and the library’s eventual mission to support cataloging at local libraries across the US. As the text explains, the Library of Congress was actually one of the last major collections in the US to adopt the card cataloging system, but when they did so, it transformed library cataloging nationwide.

I was fascinated by trivia such as the French origin of library catalog cards in the repurposing of playing cards, and the features of the “library hand” in which American catalogers were trained for creating cards in manuscript. I was also gratified to find out that the physical card catalog of the Library of Congress, while retired, has been retained. As explained and amply demonstrated in this book, there is valuable information in the cards that did not make it into the MARC records created by a private vendor from the card catalog in the 1980s. The visible emendations to a card show change in the status of a given book (promotion from second to “official” copy, for example), details of changes between editions, and developments in metadata such as the addition of an author’s date of death.

There are many full color reproductions from catalogs that preceded the card catalog, and over half of the book consists of pictures of cards from the catalog, accompanied by photos of the actual books (or other media objects) and often portraits of the authors. The fact that The Card Catalog is thus itself a secondary product of the catalogers who worked in the Library of Congress is evidently why writer and editor Peter Devereaux gave the book’s byline to the institution itself, crediting on the cover Librarian of Congress Carla Hayden with the foreword, and effacing his own role–showing it only in his subscription to the introduction.

I enjoyed reading this book far more than I expected to. I recommend it to both the curious and the nostalgic, and I’m glad that it exists to help document this increasingly ghostly element of information science. [via] 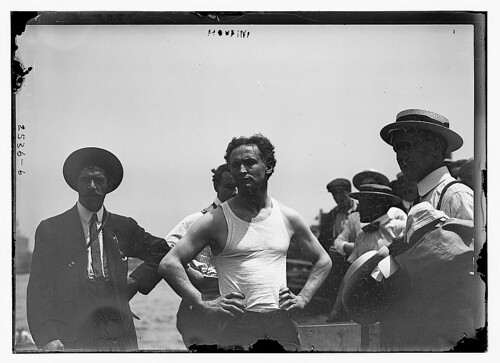 Houdini (LOC), originally uploaded by The Library of Congress.

Images of your ritual or ritual space, images of sigils or tools, showing off your own library or special volume from the restricted stacks – these and much more are part of the culture and practice of magick.