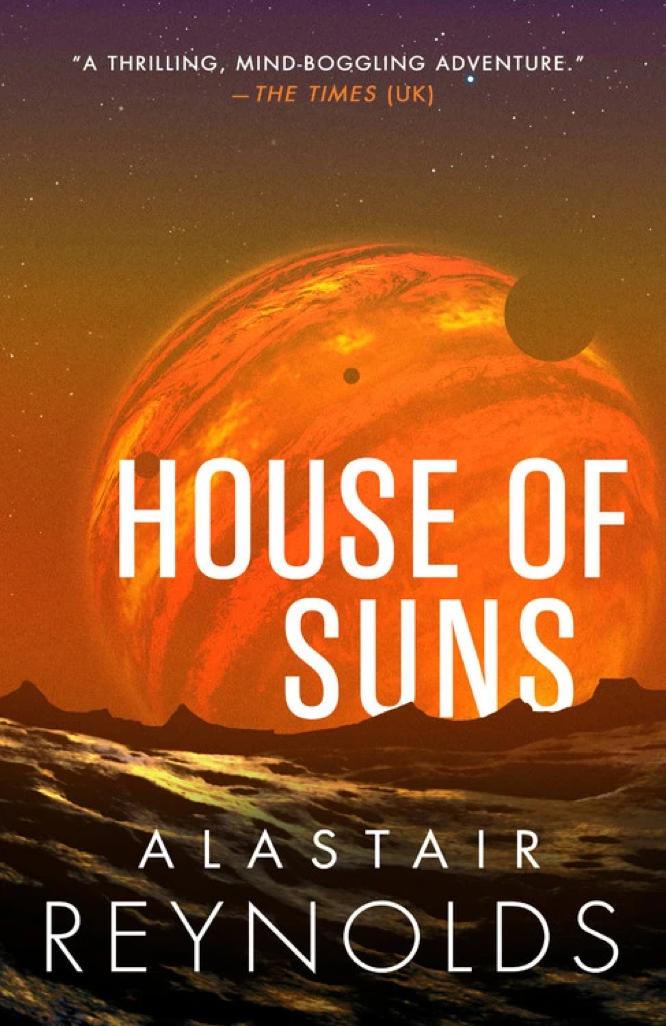 I hadn’t previously read anything by the successful contemporary sf author Alastair Reynolds, and rather than start with any of the series books for which he is perhaps better known, I read the standalone House of Suns. This doorstop novel is a far-future space opera centered on a “shatterling line,” i.e. a star-faring community of immortal clones, capable of stellar engineering, who explore the galaxy individually and rejoin to pool their knowledge and memories at intervals of many thousands of years.

(Reynolds is about my age, and I wondered at one point in this book if it had been partly inspired by a childhood reception of the mysterious allusions to the ‘Clone Wars’ in the 1977 Star Wars film, before those were fleshed out into the typically disappointing fare of the later development of that franchise.)

There are three characters with narration duties. At the start, and at wide intervals throughout, a much earlier story is told by Abigail Gentian, founder and clone parent of the House of Flowers, or Gentian Line of shatterlings. Otherwise, the narrative voice alternates chapter-by-chapter between a pair of incestuous Gentians in a “present” setting millions of years later.

Important to the plot and the setting of the book are a race of autonomous “Machine People” who vastly surpass humans in physical and mental capabilities at the individual level. I thought it a little odd that these were often referred to as “robots” as if the term were not pejorative. There are allusions early in the book to an interstellar human faction (“human” is used to include a wide range of post- and trans- humanity) called the Disavowers, who are antagonistic to the Machine People, but this notion is never fully developed.

In reviews and commentary on this book, I have seen it characterized as “hard” science fiction. Reynolds certainly has the scientific chops to write hard sf, but this story is set amidst technology so very advanced beyond our immediate ambitions, and so speculative, that it read as fairly fantastic to me. Only the willingness to take seriously the relativistic limitations on interstellar polity seemed “hard.” The stasis technology used for “abeyance” and “chronomesh” time drugs in particular seemed almost as hand-wavy as superluminal jump drives.

In its galactic scope and range of humanity-stretching concepts, this novel most reminded me of two other space operas, Vinge’s A Fire Upon the Deep and MacLeod’s Engine City. I did enjoy it, but it didn’t deliver an itch to seek out and read more of Reynolds’ work immediately. 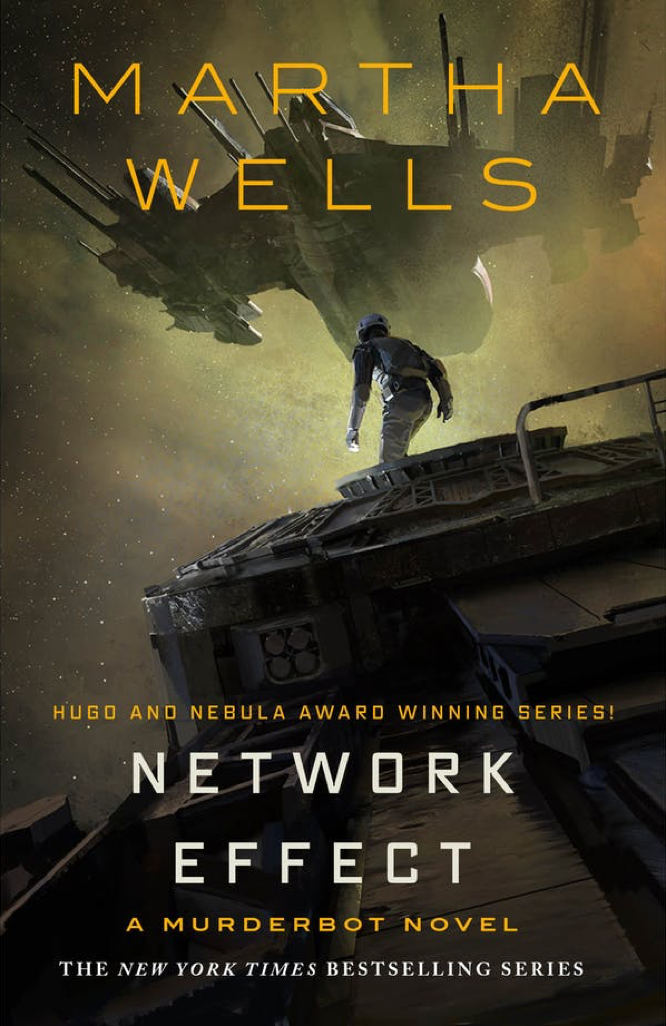 After the four prior novellas (to be fair, the last two really were full novels, if short ones), this fifth Murderbot diary is about twice the length of any of the ones to precede it. The story makes for reading just as compulsive as the others. In many ways, this one is Artificial Condition 2.0, revisiting and expanding on the protagonist’s relationship with the intimidating research starship AI who had been introduced in the second book.

The functional ways in which sf readers can identify with Murderbot really jumped out at me this time, even though most of them had been present through the earlier stories. In particular, the construct’s appetite for “entertainment media” distractions (like mine for the book I was reading) and its ability to attend to coded inputs outside of direct sensory experience (like mine to the book I was reading) provide a vertiginous mirroring for the reader. The resonance of the Corporation Rim interstellar governance with US-imperial neoliberal nightmare was increasingly vivid, this time amplified with a focus on the dynamics of settler colonialism and its cruelty to the colonists, let alone any indigenes.

One interlude offered a little reflection on Murderbot’s unwillingness to use the proper name of the bond company that originally owned (and presumably built) it. I have been wondering if a future book will include a revelation that explicitly identifies that malefic corporation with some actual 21st-century commercial or political entity.

There were a couple of clever twists, but the plot was pretty well determined and predictable prior to the action climax, which thus had a little premature feeling of denouement. Still, I did enjoy the book all the way to the end. As usual, the AI characters were better defined and more compelling than the humans, but as Murderbot has come to understand itself better, affections and motivations regarding humans in the story have become clearer and more interesting. The arc of the relationship between Murderbot and Mensah’s daughter Amena was a highlight.

Good grief, Sal thought. This is awful. They can do all kinds of things we can’t; they’re centuries ahead of us. Who around here that I know can annihilate time? No one. He groaned aloud. 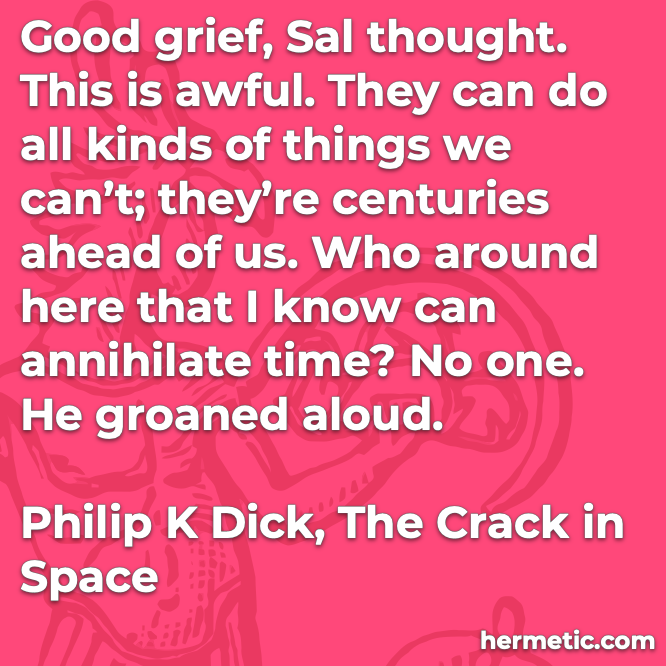 These parallel worlds are a knotty problem, he realized. I wonder how many exist. Dozens? With a different human sub-species dominant on each? Weird idea. He shivered. God, how unpleasant . . . like concentric rings of hell, each with its own particular brand of torment. 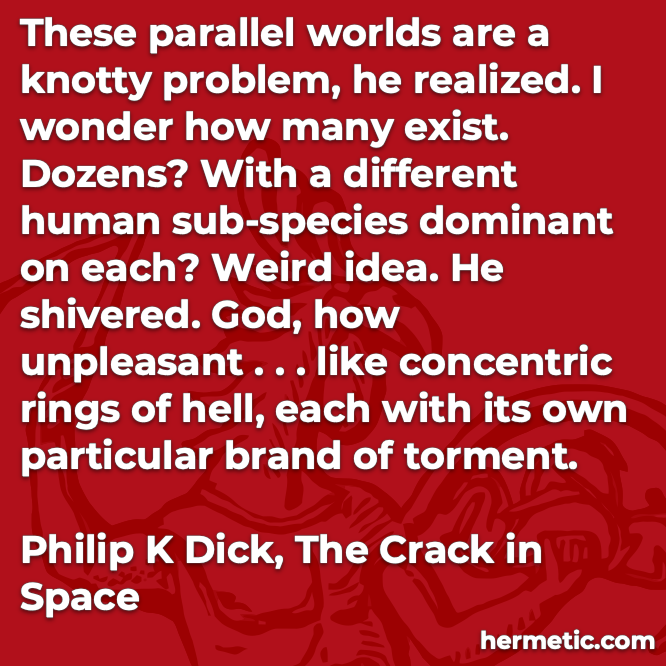