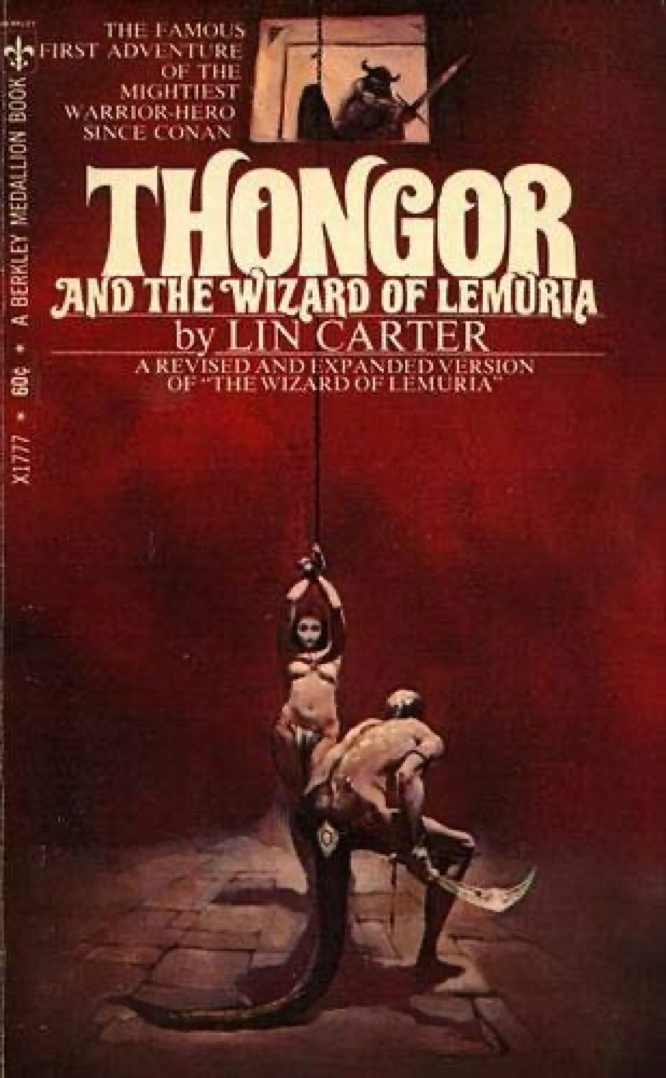 Hermetic Library Fellow T Polyphilus reviews By the Light of the Green Star by Lin Carter. In the third Green Star installment, Lin Carter seems to have hit his groove. He maintains two parallel plot lines, alternating between them with a series of cliffhangers. The pacing is fast, with short chapters like those of the previous volumes. The end was not quite as much a cliffhanger as the previous book, but it was a big downer, heavy on dramatic irony and inconclusive. I liked Roy Krenkel’s illustrations better than the ones by Luis Dominguez in the prior book.

This leg of the story really showed its Barsoomian literary genealogy, introducing both chthonic and aerial sub-races of the Green Star world’s humanoids. Reading the glossary appendix that recapped the heroes and monsters of the first three books, it occurred to me that the world of the Green Star would make an excellent milieu for a tabletop fantasy role-playing game: distinctive, varied, and easily appreciated as a setting for heroic adventure. [via] Discoveries in Fantasy is an anthology volume of the Ballantine Adult Fantasy series. It brings together shorter works by four pre-Tolkien English fantasists selected and introduced by Lin Carter, mostly with the avowed intention of later publishing a full book of the work of each. All four of the writers were obscure in 1972 when this book was published, and they have remained so. Much as I like it, there was probably little help supplied by the cover art by Peter La Vasseur, which shows a roc flying through an Orientalist fantasy landscape with a naked woman in its talons. (This picture actually illustrates one of the stories in the book, “The Bird with the Golden Beak” by Donald Corley.)

The first two stories are sinophile yarns by Ernest Bramah. Carter is wrong that Bramah’s Chinese lore is entirely invented. Fo-hi, for example, was genuinely the legendary Chinese emperor responsible for formulating the trigrams. And on page 44 Bramah cleverly quotes the Tao Te Ching out of context. But any and all of this lore might well have come out of the OUP Sacred Books of the East, and probably did, so that Carter discounting the rumor of Bramah’s travels to China is still reasonable. “The Vision of Yin” is actually rather replete with such references, while “The Dragon of Chang Tao” starts out sort of strangely European in its regard for dragons, but eventually reaches a more sophisticated and “Chinese” relationship to them.

The third and fourth stories are drawn from the book The Twilight of the Gods by Richard Garnett. I had never heard of this book, which evidently contains most if not all of its author’s fantasy output. The title is misleading, since it is not concerned with a northern Götterdämmerung, but rather with the eclipse of pagan antiquity by Christianity. These were terrific, and Garnett’s book went onto my wishlist straight away. He is quite careful about his historical contexts, interpolating supernatural events to explain enigmas of the ancient world, such as Nonnus of Panopolis authoring both a thirty-book Dionysian saga and a paraphrase of the Gospel of John.

The two stories by Donald Corley are lapidary tales with a greater amount of pathos than the frequently arch fantasies from the other contributors. Carter relates that Corley was championed by Cabell, but I found Corley’s tone to be the least Cabellian of all the writers here. I did enjoy these and I would read more of Corley’s work if I came across it.

The last and longest story in the book is “The Miniature” by Eden Phillpotts–an author neglected by American audiences, but remembered in England, according to Carter. This one did not satisfy me. It was a resume of human history from the perspective of the Olympian deities. Some of the later points were already counter to the historical narrative in 1972, and the conclusion definitely did not hold up well as a prognosis for human society to this twenty-first century reader. The colloquies among the gods were rather flat, and I would far prefer to return to Giordano Bruno’s Expulsion of the Triumphant Beast for this sort of “council of the gods” story than seek out any of the others reportedly written by Phillpotts along similar lines. [via]