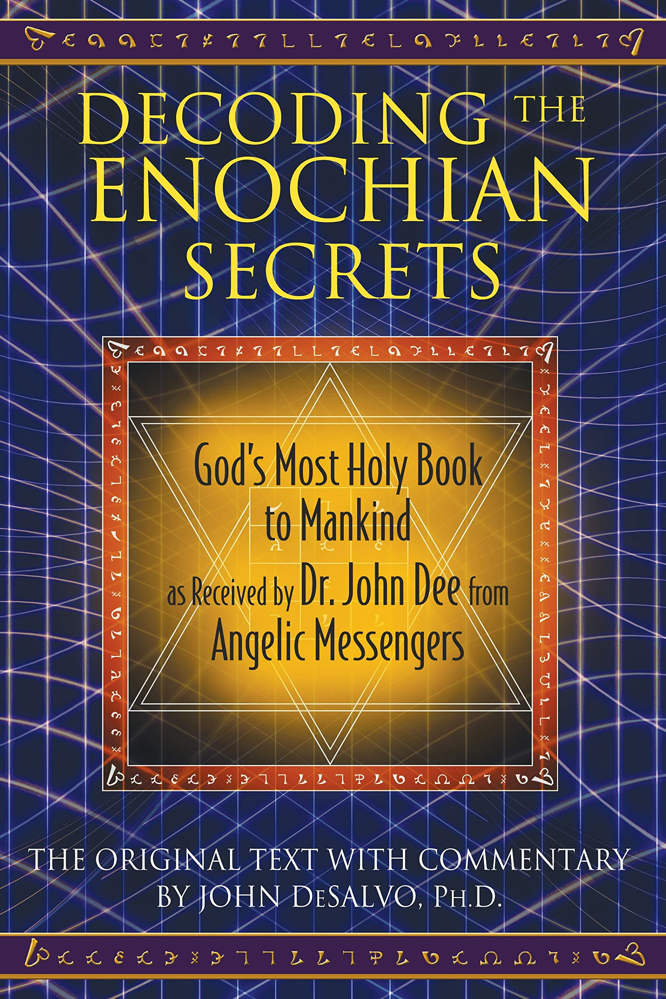 The highlight of this relatively recent (2011) volume on angelic magic is the first complete publication of the last remaining element of John Dee’s Enochian corpus as delivered to him by spirits through the mediumship of Edward Kelley, i.e. Liber Logaeth, a.k.a. the “Book of Enoch.” Author John DeSalvo provides that text in the form of scanned facsimiles from the British Library. This Appendix B is more than half of the book.

Decoding the Enochian Secrets starts with a couple of chapters regarding the biblical person of Enoch and the ancient (“apocryphal”) Book of Enoch, with some inquiry into their connections with the Dee and Kelley materials. While I was intrigued by the idea that DeSalvo might come up with something new on this front, as he certainly gives it more sustained attention than most authors on the topic, he’s not able to muster anything beyond broad thematic similarities between ancient and early modern “Enochian” lore. He also supplies a high-level summary of the Dee and Kelley evocations, repeatedly quoting passages from the diaries that describe Kelley being struck and lit by radiant beams from the stone.

DeSalvo’s commendable attention to primary materials does result in an editorial clarification of the forty-nine tables of Liber Logaeth, including the “missing” forty-ninth. He emphasizes that Dee’s diaries identify the express purpose of the Calls to be assisting with the understanding of how to operate these tables, also that the angels enjoined Dee not to do that work until receiving further commands–which were never delivered.

Nevertheless, the recommendations here for contemporary practice are surprisingly conventional, and very much in the mode of Crowley and Regardie (the only 20th-century magicians DeSalvo mentions). His method for “meditation” on the aethyrs prescribes the lesser pentagram ritual for opening and closing, and includes goetic-style prayer and “license to depart” both marked as “optional.”

I agree with DeSalvo’s view that original versions of these tables were probably all inscribed by Dee while the entranced Kelley was dictating them. (All but one of the surviving tables are in Kelley’s hand, evidently copied from Dee’s.) He makes the credible and intriguing suggestion that these originals might survive, perhaps even in the British Library, subject to misattribution or faulty cataloging.

DeSalvo speculates that Liber Logaeth was received by Dee, but embargoed by the angels because it is intended to serve as a device of the “end times.” He suggests that his work in issuing this book is part of that instrumentality, even connecting it with “2012 being the end date of the Mayan calendar” (73). On this front, he willfully ignores the chiliastic dimension of Crowley’s The Vision & the Voice, and seems to mistake the immanentization of the eschaton for its “imminentization.”

This book tries to straddle the gap between a popular introduction to Enochian magic and a more specialized defense of DeSalvo’s own theories and excavation of sources. I would only recommend it for the latter, since there are other and better options for the former. 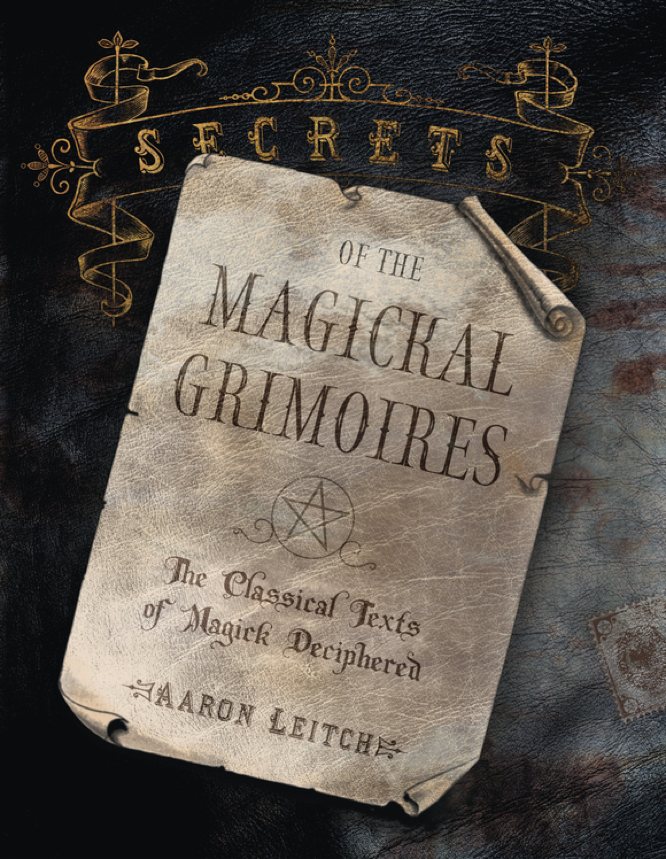 The lure of that secret, hidden knowledge buried in a old musty tome just waiting for someone to come along and read the words thus releasing some great power, has lured many new magician with the hopes that they can do just that from picking up those slightly scary and to some degree, awe-inspiring books known as Grimoires. Unfortunately, most of the magical community has done just that, but once we had these books with names like Clavicula Salomonis (The Key of Solomon the King), the Lemegeton, the Goetia, Grimoirum Verum, or even that seemingly holy (unholy) book, The Grand Grimoire, what do we do with them? We read them and quickly learn that we are not sure what we are supposed to do with this great secret wisdom and power that we hold in our hands, so these books go back on the shelf to collect dust for most of us.

Now a new light shines on these often discussed, but long neglected books on our shelves. Aaron Leitch, a scholar and spiritual seeker with over a decade of practical experience has written a book that will be helpful to every magician that has the call to work with those classic books on magic. Where books like Modern Magick by Donald Michael Kraig and Summoning Spirits by Konstantinos give the hopeful magician snippets of information or information that is not that helpful to many, Leitch lays out a detailed method of working with these classics.

When I first got the book I was impressed for a product from Llewellyn. In many cases Llewellyn’s books do not have any sort of reference of where the writer is getting his information, but in Secrets of the Magickal Grimoires, there are detailed endnotes at the end of each chapter showing the research that has gone into the material presented. The next thing that caught my eye was the use of relevant images throughout the book to illustrate a point made by Leitch in the text or to help explain passages from those musty old books. Being something of a scholar myself, I just had to check out what the bibliography looked like…I was again surprised to find one of the most comprehensive bibliographies that I have seen in sometime outside of most academic circles. Finally, I got the best surprise of all…I sat down to read the book, and in the text was clear knowledge of those sirens known as the grimoires. Aaron Leitch clearly expressed his points and explained those difficult passages from such esoteric volumes as the Heptameron and the Sworn Book of Honorius in a clear manner that shed the light of understanding suddenly on just what those magicians of 400 – 500 years ago were talking about.

The book is impressive in its size. At four hundred and thirty-two pages with additional xxi pages of Table of Content, Acknowledgements Preface, and Introduction it makes for a large book. Do not let the size fool or scare you away, it is well worth reading. The Preface is full of praise for Leitch and his work on the subject is written by Chic and Tabatha Cicero. The rest of the book covers such topics as medieval magick with a short history of the classic grimoires from the Picatrix to The Grand Grimoire and every other classic grimoire or important text relating to them such as Barrett’s The Magus and Casaubon’s A True and Faithful Relation of What Passed for Many Yeers Between Dr. John Dee (A Mathematician of Great Fame in Q. Eliz. And King James their Reignes) and Some Spirits to chapters on what tools are described in the texts of the old grimoires with modern-day methods of creating them as well as many places to find the required materials for them. The meat of the book though covers the operations listed in the classic grimoires and just what is meant for a person to follow the often misunderstood instructions that were written in them so that a person can perform them in the 21st Century.

If the glowing words above do not inspire you to get this book, then I will say it in very plain English. Go out and buy this book, come home and read it, and then look at those dusty volumes on your shelf that long ago promised you the lure of sudden power and knowledge of our Holy Guardian Angel in a new light. 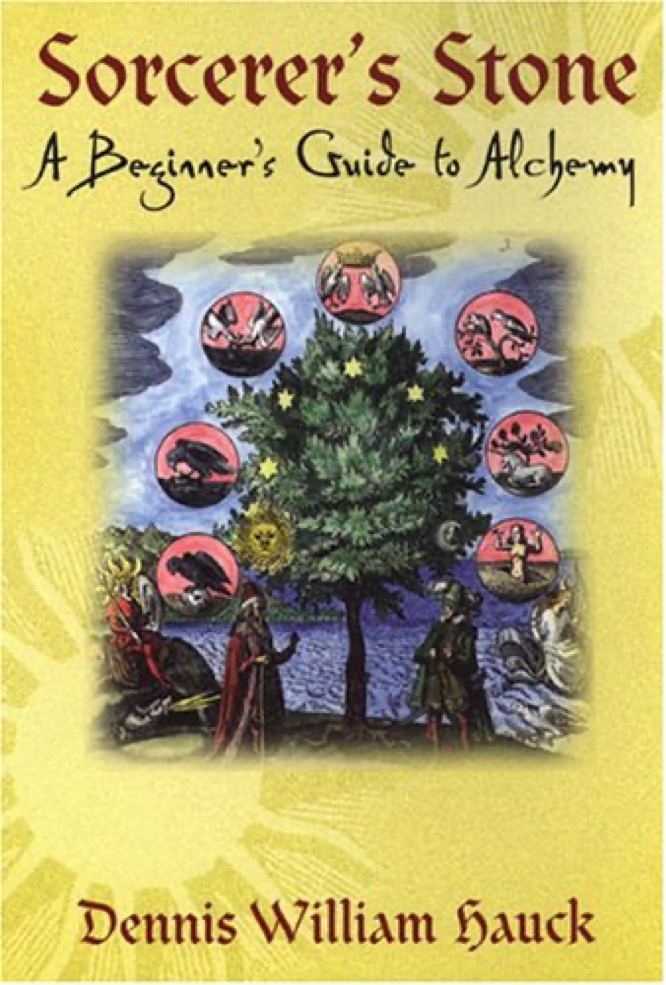