The Secret Rituals of the O.T.O., edited and introduced by Francis X King, the 1973 hardcover edition from Weiser Books, is part of the collection at the Reading Room. 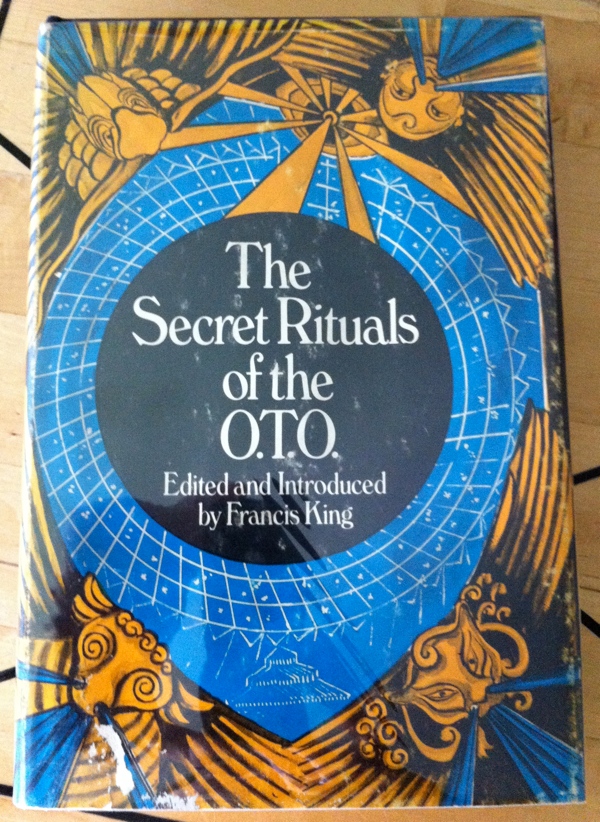 “In recent years there has been a remarkable resurgence of interest in what is generally referred to as the ‘Occult’. Popular Sun-sign astrology has become a subject for cocktail party chatter; the ‘Underground press’ displays an intensive, although often ill-informed, interest in such subjects as Glastonbury, Ley Hunting, and Flying Saucers; and books — many of them owing what little merit they possess to the skilful employment of scissors and paste — on all aspects of occultism pour from all the presses.

In the shadow of such well-published aspects of the Occult revival can be dimly discernec the shape of an altogether more important phenomenon — nothing less than the rebirth of Magic. Magic, that is, in the sense that is was defined by that extraordinary occultist Dion Fortune: ‘The science and art of causing changes in consciousness in accordance with will.’

There is no doubt that the magical techniques, for which extraordinary efficacy is claimed, are almost exclusively derived (although sometimes indirectly) from those two extraordinary occult sodalites the Hermetic Order of the Golden Dawn and the Ordo Templi Orientis. The rites and secret instructions of the former organization are easily available in Dr Francis Regardie’s Golden Dawn, a work which only now, thirty-five years after its first publication, is beginning to receive the appreciation it so undoubtedly deserves. Those of the latter, the Ordo Templi Orientis, have hitherto never been published, although grossly inaccurate and incomplete typescript versions of them have occasionally been sold for high prices.

Now, at last, this volume makes available to the occult student not only the symbolic-masonic riches of the initiate on rituals of the O.T.O. but the secret magical instructions of the Order’s seventh, either and ninth degrees, the full details of the techniques from which such occultists as Theodor Reuss and Aleister Crowley derived their mystic powers.

Here is a source book that has a place in the library of every serious student of the Occult.”