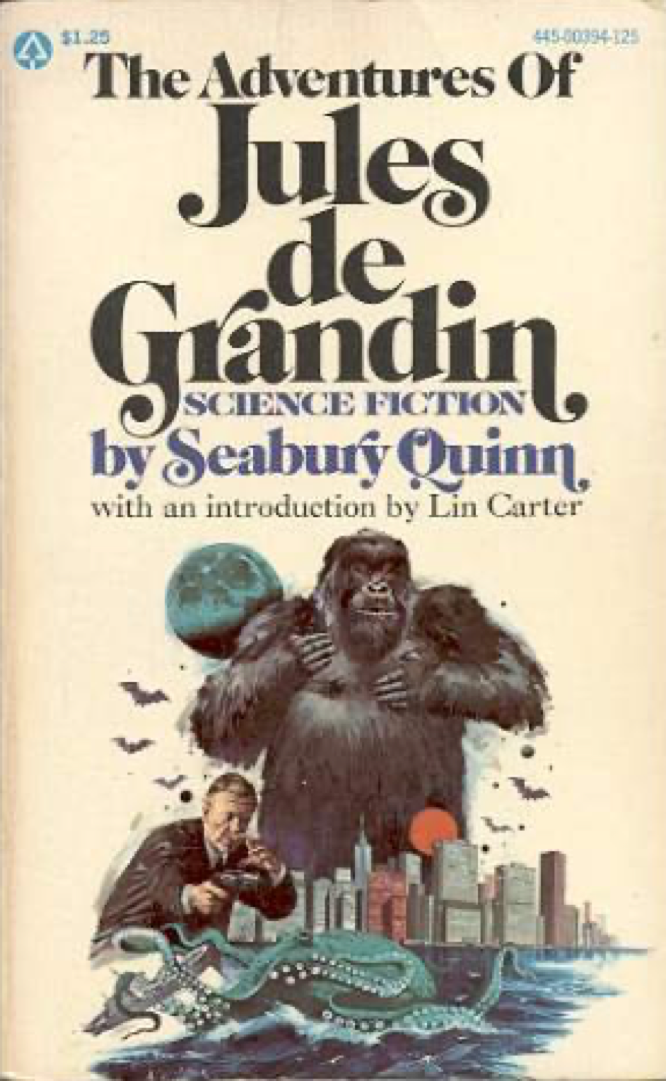 This first volume of the 1970s paperback series reprints seven out of the ninety-three Jules de Grandin stories by Seabury Quinn, including several of the earliest. These began in the 1920s and quickly became a staple of Weird Tales, where they appeared nearly every other month. They were not a serial, however. There is no overarching plot nor development over time of the central characters, who are stock types of an occult investigator and his medical doctor amanuensis. In general, the stories rely on broadly-drawn characters and stereotypes in order to maintain a high tempo and to create a quotidian background for shocking crimes and supernatural menaces.

The sleuth de Grandin himself is an amusingly exaggerated, sword-cane-wielding, mustachioed, gallic scientist of diminutive stature. Most of his adventures take place in the hometown of his host and colleague Doctor Trowbridge, Harrisonville, New Jersey. Being a European in America allows de Grandin to make amusing asides castigating Prohibition, religious bigotry, and other forms of American provincialism. “Today your American courts convict high school-teachers for heresy far less grave than that charged against our Jeanne [d’Arc]. We may yet see the bones of your so estimable Thomas Jefferson and Benjamin Franklin exhumed from their graves and publicly burned by your heretic-baiters of this today” (53, Plus ça change, plus c’est la même chose!).

The narrator Trowbridge maintains a naïve skepticism in the face of exotic events that grows less believable with each passing tale. One of the strengths of the stories is their use of menaces drawn from folk traditions and popular culture (vampires and werewolves, for instance) while allowing that the common lore may be inaccurate in its details. Thus the reader can see where de Grandin’s hypotheses are leading him–while Trowbridge refuses even to consider such fanciful notions–but the tension of the unknown is maintained, along with a sense of the “scientific.”

In those points where de Grandin explains or employs occultism as such, the details tend to be fairly flawed. For example, Trowbridge describes a hexagram (and the book even supplies a diagram) but de Grandin calls it a “pentagram” (182). In another adventure, de Grandin calls elemental spirits “Neutrarians,” a term I hadn’t previously encountered, but which appears to have been coined by Elliot O’Donnell in his Twenty Years Experiences as a Ghost Hunter.

These stories are not great works of literature, and it doesn’t seem that anyone has ever mistaken them for such. They are pulp paragons, and one of their attractions is their great variety, from the piracy-and-cannibalism yarn of “The Isle of Missing Ships” to the parapsychological crime mystery of “The Dead Hand.” Quinn’s de Grandin stories frequently served as the basis for the cover illustrations of the numbers of Weird Tales in which they appeared. Even reading them in this mass market paperback reprint, it is easy to spot the moments in the stories that would be chosen for this honor. They usually featured a naked woman in peril. “The Tenants of Broussac” (scene on page 67) and “The Man Who Cast No Shadow” (153-4) are the two stories in this collection that were realized as cover art in their magazine appearances, and it is easy to note Quinn offering similarly “graphic” climaxes in every tale.